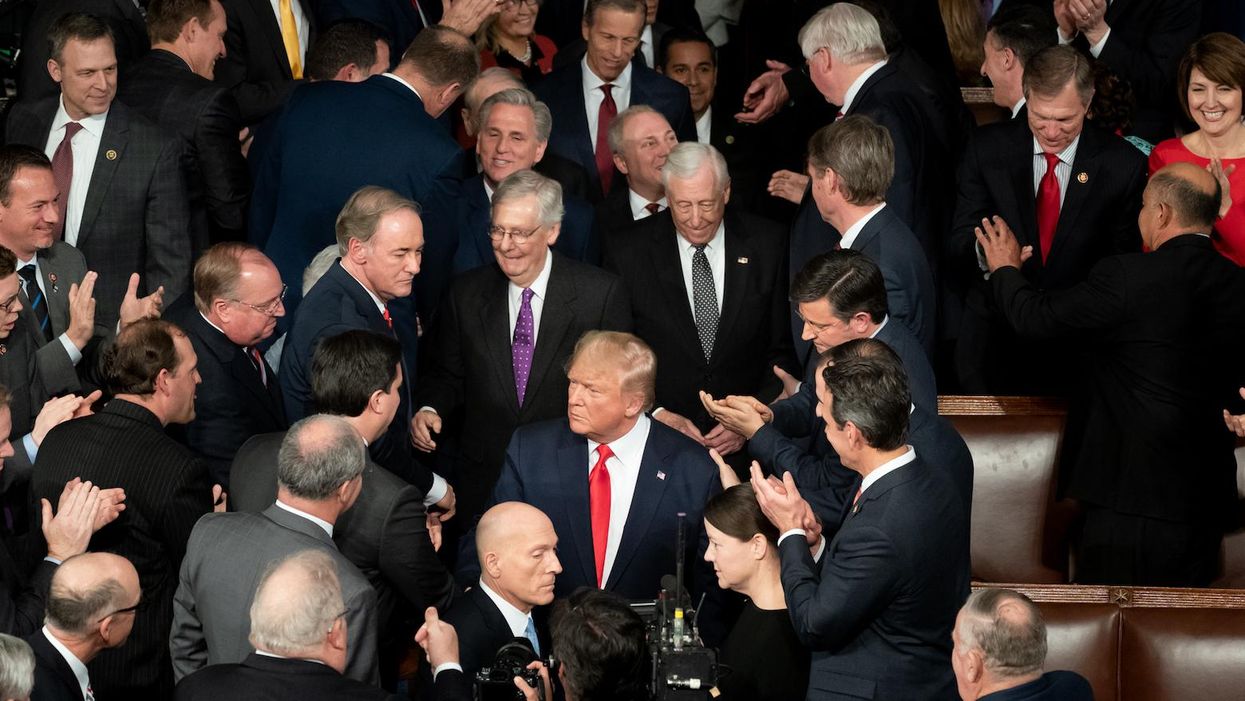 President Donald J. Trump arrives in the House chamber and is greeted by members of Congress prior to delivering his State of the Union address Tuesday, Feb. 4, at the U.S. Capitol in Washington, D.C. (Official White House Photo by Andrea Hanks)
Claire Potter
March 23, 2021

Why, at this time of desperate need, does the Republican leadership refuse to put its fingerprints on legislation that relieves the American people's suffering? Not one Republican in the entire US Congress voted for the American Rescue Plan Act (ARPA).

If you scrolled through right-wing social media last weekend, you'd see the top news was not the increased pace of vaccination or the arrival of $1,400 stimmies. It was Joe Biden's triple-stumble on the staircase to Air Force One. A particularly creative meme tweeted out by Donald Trump, Jr. interspersed video of the former president hitting golf balls, which then appeared to hit Biden in the head and knock him down.

United behind obstructionism so extreme it overwhelmed the need to pass legislation when the GOP controlled both chambers of the Congress, Biden tripping and falling now counts as a Republican win. In fact, over the four years of the Trump administration, exactly one major piece of legislation was passed, the Tax Cuts and Jobs Act of 2017, a big unwrapped present to corporations, but not to the American people. Instead, congressional Republicans have unified behind the bizarre theory that Congress must deliver cultural criticism and mean jokes about their colleagues.

In fact, the GOP seems engaged in dismantling the government, a project the 2017 tax package enhanced. Even as the national debt spiraled upwards to $27 trillion by the end of 2020 (a number that will probably go higher when the Covid-19 pandemic is fully calculated), vital government responsibilities like public health, delivering the mail, and monitoring tax returns were starved of funding and personnel.

Yet congressional Republicans, still reeling from their 2020 election losses and in desperate need of a win, don't see helping their own constituents as a way back to power in 2022. In fact, they seem to be willing to absorb as many legislative losses as they need to, including voting unanimously against the nearly $2 trillion covid pandemic relief package that delivers tangible aid to their constituents. Why?

The most obvious answer is that the Republican Party has put itself in a box. It cannot embrace popular right-wing conspiracy theories that Biden is a tired, confused old man fronting for socialists (which seems to be their strategy for 2022) while simultaneously doing business with him. Instead, the Party of No portrays itself as taking a principled stand against obvious—and, importantly, hidden—government interference. As Senator Ted Cruz (R-TX) told Fox News, Biden was being deliberately "boring" in his policy approach in order to "hide his radical policy agenda."

Cruz and others also insist, against all evidence, that a nation that is governed least is governed best. Rand Paul has used his medical credentials (he's an ophthalmologist) to oppose government action against the coronavirus since last spring. Famous for misinformed public rants that portray federal health mandates as authoritarian, Paul bullied the covid-czar Anthony Fauci last week in a televised Senate hearing.

Not acknowledging the crisis helps the GOP to obscure its role, and the role of the Trump administration, in driving the nation into a ditch. More importantly, accepting the win of delivering services to their constituents with a bipartisan ARPA would have represented significant ideological backpedaling for a party that, since the Reagan administration, had refused the idea that government aid can ever be a hand up. But surely, you might ask, there is a less nakedly ideological explanation than this?

The answer is yes. With the national government now dominated by Democrats, the GOP is pushing meaningful legislation to Republican-dominated county governments, state legislatures and governor's mansions where they can win. There, a torrent of legislation—from culture-war edicts on school curricula to laws expanding gun ownership, and restricting reproductive and voting rights—is flourishing. When challenged, those laws will go to a US Supreme Court built by Mitch McConnell.

There are Republicans willing to take credit for government spending for which they never voted. "Independent restaurant owners have won $28.6 billion of relief," Senator Roger Wicker tweeted to Mississippi constituents on March 10. But that is also an important clue. Republicans know that even without their support that Democrats will help their constituents, indirectly deflecting voter discontent. Fed and housed by the government while at the same time fired up by GOP accomplishments at the local level, Republicans hope these same voters will return them to power in 2022.