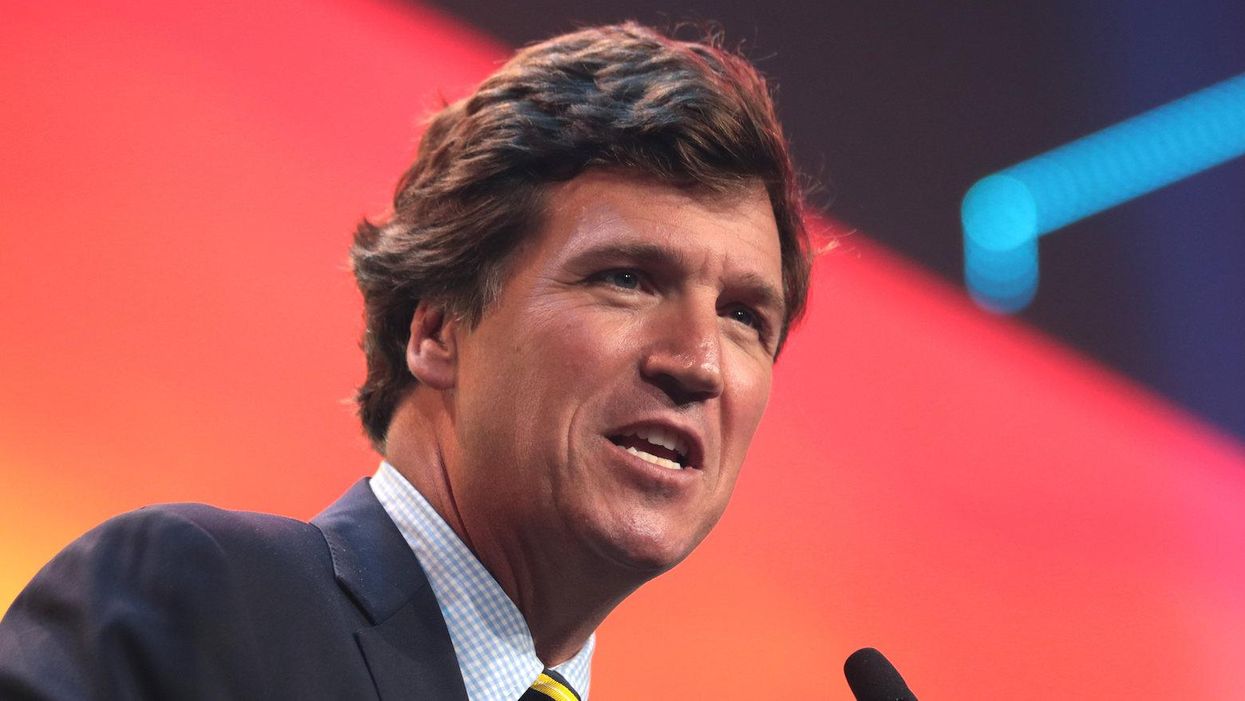 For a brief, shining moment after Donald Trump incited an insurrection on the Capitol on January 6, it seemed that the forces of rising authoritarianism in America might be curtailed, shamed by the violence that had been unleashed by their lies and bitterness over losing the election. But nope, Republicans have quickly reverted back. After all, the fundamental problem facing the Republican party and the larger American right hasn't been resolved. They still know full well that their ideology is unpopular, their arguments are indefensible, and that the only way they can hold onto power is by gutting the ability of the voters to throw them out. And so, as the past month has shown, conservatives are not only becoming more fascistic in the aftermath of the riot but more shameless about their intentions.

The GOP war on voting has become the number one priority, with a bevy of conservative groups reorienting their organizing around keeping Americans away from ballots. Republicans are leaning into the racist signaling around the voter suppression efforts, and when confronted with it, they barely bother to defend themselves, mainly because there is no moral defense possible. There's lip-smacking from the right about "voter fraud" — which they continue to fail to show is a problem, much less one that voter suppression efforts will fix — but these excuses are pro forma, and you can tell their hearts aren't in it.

Instead of trying to sell their behavior as good and righteous, instead, conservatives are coalescing around a different excuse: The liberals are making them do it! They don't want to be fascists, you see, but gosh darn it, they have no choice!

This excuse was most clearly articulated for a large audience on Tucker Carlson's Fox News show last week. His guest, Jesse Kelly, ranted that he is "worried" — and by "worried", he means he's threatening — that the "right is going to pick a fascist" because "if we're going to be all treated like criminals and all subject to every single law, while antifa/Black Lives Matter guys go free and Hunter Biden goes free, then the right's going to take drastic measures."

Carlson, far from pushing back on this "don't make us hit you" threat, performed his idiotic mouth-open fake serious face, as if this was an intellectual discussion about something happening beyond his control. In reality, his show is a nightly blast of encouragement at his fans to embrace their more fascistic yearnings.

The more "intellectual" version of this argument was rolled out by Glenn Ellmers at the American Mind blog of the Claremont Institute, a fairly prestigious conservative think tank that is oriented around the task of putting an intellectualized gloss on the reactionary impulses of the right. In the piece, Ellmers argues openly that "most people living in the United States today" — by which he clearly and explicitly means Democratic voters — "are not Americans in any meaningful sense of the term."

Defining most Americans as non-American, of course, is about justifying an all-out assault on their rights and freedoms. As progressive writer John Ganz wrote in his lengthy rebuttal to Ellmers, this is a "radically anti-democratic conceit of delegitimizing the citizenship of the majority of the country." But Ellmers, like Kelly, pretends to say this more in sorrow than anger, claiming that the left has forced this turn towards fascism (though he pretends it isn't fascism) because the liberal majority does "not believe in, live by, or even like the principles, traditions, and ideals that until recently defined America as a nation and as a people."

In this argument, of course, only the right gets to decide what counts as a legitimate American value. It's closed-loop logic: You are technically free, but only if you live your life in a way prescribed by the religious right. You're allowed to vote, but only if you vote for Republicans. But can freedom really be freedom if it's stripped away from you the second you actually use your freedom? Of course not. This kind of illogic allows authoritarians to claim to be "pro-freedom" while refusing people real freedom.

On his recent call to Laura Ingraham's Fox News show, Trump understandably made headlines with lies about the Capitol insurrectionists, who he falsely claimed were "zero threat", even though they killed on Capitol police officer, traumatized two to the point of suicide, and left 140 injured. But equally disturbing was the way Trump justified the violence, even as he pretended not to see it.

"When I look at antifa and what they did to Washington," he whined, "and what they did to other locations, and the destruction, and frankly the killing and the beating up of people, and nothing happens to them whatsoever? Why aren't they going after antifa?"

Of course, this is more lies. Research shows that 98% of the Black Lives Matter protests were peaceful, and that police were often the instigators of the violence. But Trump's lie serves a purpose. Like Kelly and Ellmers, Trump is setting up the claim that violence and fascism are not something that conservatives are choosing willingly, but something they've been forced to embrace. You know, because "antifa" and the "beating up of people," most of which resides in the fevered conservative's imagination rather than reality.

As Adam Serwer at the Atlantic recently noted, from the very beginning of Trump's presidency, conservatives perceived him as "a punishment" and would "respond to any perceived liberal excess with a simple phrase: 'This is why Trump won.'" They knew that it was wrong to vote for Trump, that it made them bad people to do it, but insisted that they were forced into this immoral position by alleged liberal excesses, most of which were silly, made up entirely or wildly exaggerated. (Literally, conservatives justified the immoral choice to vote for Trump by citing the existence of veggie burgers, gay rights demonstrators twerking, and Disneyland removing a "humorous" display about selling women into prostitution.) Now that logic has exploded all over the right, being used to justify all their own grotesque, fascistic, or anti-democratic behavior.

In a sense, nothing is new about this.

Despite all the chest-thumping authoritarians do, they're all cowards at heart, prone to whining and playing the victim, no matter how silly the pretense. Nazis had their own version of this, with their false "stabbed in the back" narrative they used to justify their genocidal desires. From the very beginning of Trump's presidency, groups like the Proud Boys would openly trawl through liberal cities, trying to provoke a fight, so they could claim victimhood and use that as justification for violence. They can never just admit that they want to be fascists. Instead, they whine and blame someone else for their own immoral desires.

What's scary about this particular moment is that kind of illogic is starting to spread even more rapidly through conservative media. Trump's two-and-a-half-month-long coup effort may have failed to secure him a second term, but it did instill a widespread sense on the right that they were entitled to win the election. Since other voters "stole" the election by voting for Joe Biden, conservatives increasingly claim justification for ending democracy. If you reject people's right to prefer one candidate over another, however, you never believed in democracy in the first place.