McConnell's increasingly desperate efforts to keep the filibuster are backfiring 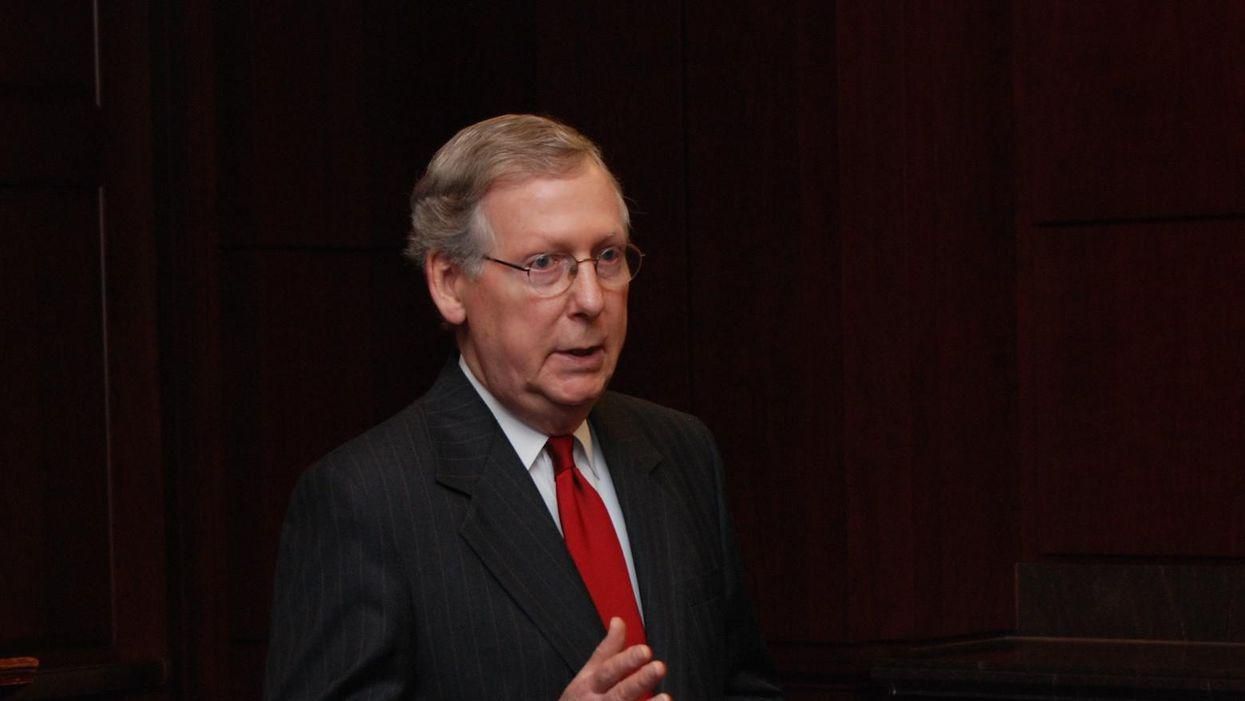 Senate Minority Leader Mitch McConnell is freaking the hell out about the potential of losing all his clout as the end of the filibuster looms. He's gone well beyond his trademark troll-like hypocrisy, and has just become hysterical—in both senses of the word. On the one hand he's threatening "nuclear winter," on the other he's creating such ridiculous ahistorical fictions that his staff has to clean up after him.

He really said that "nuclear winter" part. In a podcast interview Tuesday, McConnell let the threats fly. "If they turn the Senate into a simple majority body, the Senate is lost," he said in a conservative podcast interview. "These folks are not interested in compromise, they're interested in passing all of their bills to remake America." He got that part right, anyway. "It may not be the panacea that they anticipate it would be, it could turn the Senate into sort of a nuclear winter, where the aftermath of the so-called nuclear option is not a sustainable place," McConnell threatened. We've gone from "scorched earth" to nuclear winter in a week's time with this guy. Democrats continue to refuse to blink as he spins himself into a frenzy over the idea that he's about to lose his filibuster, that relic of Jim Crow he's been using to keep Democrats from remaking America for well over a decade.

He inadvertently made that very clear Tuesday when he let slip this ridiculous bit of historical revisionism: the filibuster, he said, has "no racial history at all. None. There's no dispute among historians." Historians immediately took to Twitter to dispute that.

Dr. Kevin Kruse had 100 years of headlines at his fingertips in a tweet thread of filibusters against anti-lynching bills and civil rights bills, adding the caveat at the end: "I should stress this isn't remotely an exhaustive list—I did it quickly and I didn't repeat years in which there were multiple filibusters on different civil rights issues." Dr. Joanne Freeman pointed out that the Senate's own website on the history of the Civil Right's Act of 1964 which begins "The longest continuous debate in Senate history took place in 1964 over the Civil Rights Act." The whole piece is centered on the efforts of southern senators to kill the bill. "On March 9, when Mansfield moved to take up the measure, southern senators launched a filibuster against the bill. The Senate debated the bill for sixty days, including seven Saturdays."

That gaffe required an immediate clean-up on aisle Mitch from his staff. What he meant, his press secretary said the "origins" of the filibuster weren't racist, citing this sentence from a PolitiFact article: "Historians told PolitiFact that the filibuster did not emerge from debates over slavery or segregation." Fine, but then here's the very next sentence in that article: "However, they agreed that the parliamentary tactic was closely affiliated with opposition to civil rights for more than a century." Then they quote one. "'The histories of the filibuster, civil and voting rights, and race in America are intertwined,' said Steven S. Smith, a political scientist and Senate specialist at Washington University in St. Louis.'"

Not that that has stopped McConnell from saying outrageous, ridiculous lies. Right after that, McConnell testified at the Senate Rules Committee hearing for S. 1, the For the People Act and actually said this:

"States are not engaging in trying to suppress voters whatsoever." He said that.

He said that when the non-partisan Brennan Center for Justice which finds "As of Feb. 19, 2021, legislators in 43 states have carried over, prefiled, or introduced more than 250 bills that would make it harder to vote—over seven times the number of restrictive bills as compared to roughly this time last year."

This all has McConnell so addled, he's creating messes all over the place for his staff. On Fox News Wednesday morning, he said "I don't believe I've spoken with [Biden] since he was sworn in." It took reporters about 10 minutes to find statements from him like this one on February 2: "The president called me on two things: Burma was one of them. The other… [was] the budget process and covid relief." Which brought out McConnell's staff again to say, yes he did speak with Biden on Burma.

"We're not going to be deterred," Schumer said. "We're going to go forward because we know the American people demand, need, want bold change. And we're going to do it. Mitch McConnell can do all the threatening and bluster he wants. It's not going to stop us." President Biden apparently concurs, with his advisers telling Axios "he's feeling bullish on what he can accomplish, and is fully prepared to support the dashing of the Senate's filibuster rule to allow Democrats to pass voting rights and other trophy legislation for his party."

McConnell's doing himself no favors by trying to stop the inevitable end of the filibuster with threats and lies. He's making it harder every day for Democrats who are queasy about getting rid of the filibuster to end up on his side. Like independent Sen. Angus King, who writes in the Washington Post, "All-out opposition to reasonable voting rights protections cannot be enabled by the filibuster; if forced to choose between a Senate rule and democracy itself, I know where I will come down."