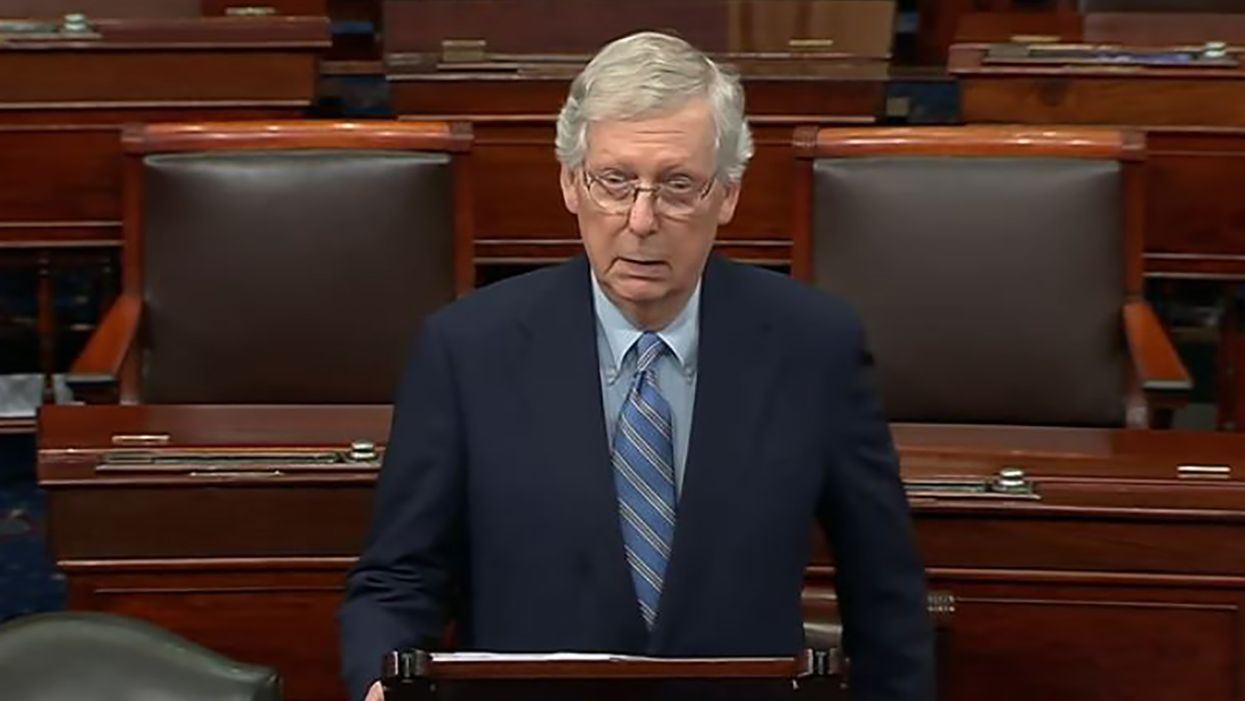 U.S. Senate Minority Leader Mitch McConnell (R-KY) mounted his harshest attack yet on Democrats amid increasing support for the Senate to kill the 60-vote filibuster, a relic of the Jim Crow era used to block civil rights legislation.

It did not go well for him.

Some pointed to McConnell's infamous strutting back in 2017, after Donald Trump won the White House, and McConnell spent the next four years blocking hundreds of bills the Democratic House passed while confirming an unprecedented number of judges, including extremists the Bar Association rated as not qualified.

But now that Democrats have control of the Senate, the House, and the White House, and McConnell is still working to block Democrats' legislation and President Joe Biden's cabinet nominees, McConnell is playing a different game: "scorched earth."

"It would not open up an express lane for the Biden presidency to speed into the history books. The Senate would function more like a hundred-car pile-up. Nothing moving."

He also took his "scorched earth" threat to the floor of the U.S. Senate:

@lindsaywise Senate Minority Leader Mitch McConnell on the filibuster: “Nobody serving in this chamber can even beg… https://t.co/2jIuQUNSkq
— The Recount (@The Recount) 1615907165.0

It's safe to say Democrats are furious, and have neither forgotten about nor forgiven McConnell for what they say is stealing a U.S. Supreme Court seat when President Barack Obama in March of 2016 nominated Merrick Garland. It sat open for 293 days and expired when the Senate concluded its session in January 2017. McConnell refused to allow hearing, much less a confirmation vote.

Trading this for the ability to actually pass bills like voting rights seems like an easy call. If McConnell's tact… https://t.co/M9ZtWSbBhG
— Adam Jentleson 🎈 (@Adam Jentleson 🎈) 1615906822.0

And this former Obama Senior Advisor has had it with mincing words:

People who treat McConnell as some sort of sincere institutionalist are full of shit or too stupid to cover Congress
— Dan Pfeiffer (@Dan Pfeiffer) 1615907538.0

Here's how others are responding to McConnell's latest power-hoarding tactic:

So McConnell seems to be saying that if the Senate reforms the rules Democrats can't pass their popular agenda but… https://t.co/di0ZBSXpLu
— Jon Lovett (@Jon Lovett) 1615912735.0

McConnell is, at least, consistent. His agenda is never about serving the interests of the American people. https://t.co/pbooRwz0L7
— Joyce Alene (@Joyce Alene) 1615911584.0

After living four years with a POTUS you supported who actually believed in "alternate" facts - you have no credibi… https://t.co/fbiJFyRAKh
— Brian J. Karem (@Brian J. Karem) 1615902515.0