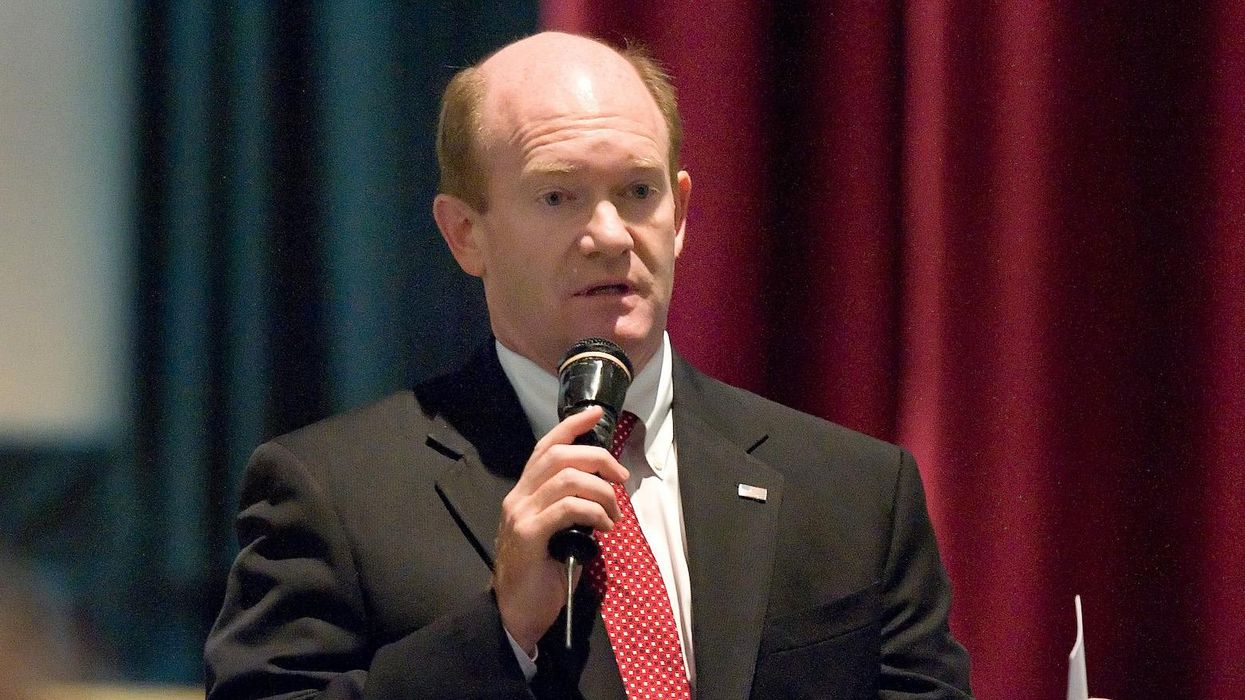 U.S. Sen. Chris Coons of Delaware speaks at a townhall meeting Aug. 8, 2013, at the base theater on Dover Air Force Base, Del. Coons spoke with Team Dover civilian employees about the impact of the furlough on their personal lives. (U.S. Air Force photo/Roland Balik)
Kenny Stancil
and
Common Dreams
March 06, 2021

After eight members of the Democratic caucus joined all 50 Republicans in the U.S. Senate on Friday to kill an amendment reattaching a $15 minimum wage provision to the Senate's coronavirus relief package, progressives pointed out that nearly every single one of the lawmakers who voted against the raise for low-paid workers nationwide is a millionaire.

"Today's vote on Senator Sanders' $15 minimum wage amendment is incredibly sad," Morris Pearl, chair of the Patriotic Millionaires and author of the forthcoming book Tax the Rich, said in a statement.

"$15 per hour is the bare minimum anyone in this country needs to survive," Pearl continued, "and it is baffling that any member of the U.S. Senate, much less a number of Democrats, could look at the crisis this country is enduring and decide that tens of millions of low-income workers, including millions of frontline workers who put their lives on the line every day in the midst of a global pandemic, should not get a raise."

Nina Turner, co-chair of Bernie Sanders' 2020 presidential campaign and current candidate running for election to the U.S. House in Ohio's 11th district, responded to the vote by tweeting: "every single one of the senators who voted against raising the minimum wage is a millionaire."

Journalist Ken Klippenstein shared the net worth, according to the most recent financial disclosures compiled by the Center for Responsive Politics, of the eight Democrats who voted against Sanders' (I-Vt.) $15 minimum wage amendment.

While her present net worth may trail that of other lawmakers, Sen. Kyrsten Sinema (D-Ariz.), was especially enthusiastic about denying a raise to millions of poorly paid U.S. workers. With her $174,000 annual salary, Sinema is well on her way to joining her wealthier colleagues in the millionaire ranks.

In his statement, Pearl said that "the Senate failed the American people today."

"Every single Republican Senator who voted against $15 today failed their constituents," he continued. "The Democrats who voted against $15 today not only failed their constituents, the decision they made—to put some ancient Senate tradition ahead of the priorities that they ran on and that they stand for—was wrong economically, morally, and politically."

Pearl was referring to the fact that Senate Democrats removed the $15 minimum wage provision from their version of the Covid-19 relief bill after the White House made clear that Vice President Kamala Harris would not be willing to exercise her authority to override a widely condemned advisory opinion of the Senate parliamentarian—an unelected official with zero constitutional authority—that deemed the proposed pay hike a violation of budget reconciliation rules.

Sanders' attempt to use the amendment process to add a federal minimum wage increase to the coronavirus relief legislation came in the wake of that decision.

"It is despicable and unacceptable," said Rep. Jamaal Bowman (D-N.Y.), "that there is not unanimous support among Democrats in Congress for a $15 minimum wage."

"There is no excuse," Pearl added. "Senator Kyrsten Sinema, Senator Jon Tester, Senator Joe Manchin, Senator Chris Coons, Senator Jeanne Shaheen, Senator Tom Carper, Senator Maggie Hassan, and Senator Angus King failed both their people and their party. Neither those voting next year nor those reading the history of the next generation will appreciate those senators who could have changed the course of history—but chose not to."

Undeterred, Sanders said Friday that "if any senator believes this is the last time they will cast a vote on whether or not to give a raise to 32 million Americans, they are sorely mistaken. We're going to keep bringing it up, and we're going to get it done because it is what the American people demand and need."

Joining Sanders was Rep. Pramila Jayapal (D-Wash.), who tweeted that she "will never stop fighting to make the minimum wage a living wage."

"It's long overdue that we give 32 million workers a raise and lift a million people out of poverty," Jayapal added.