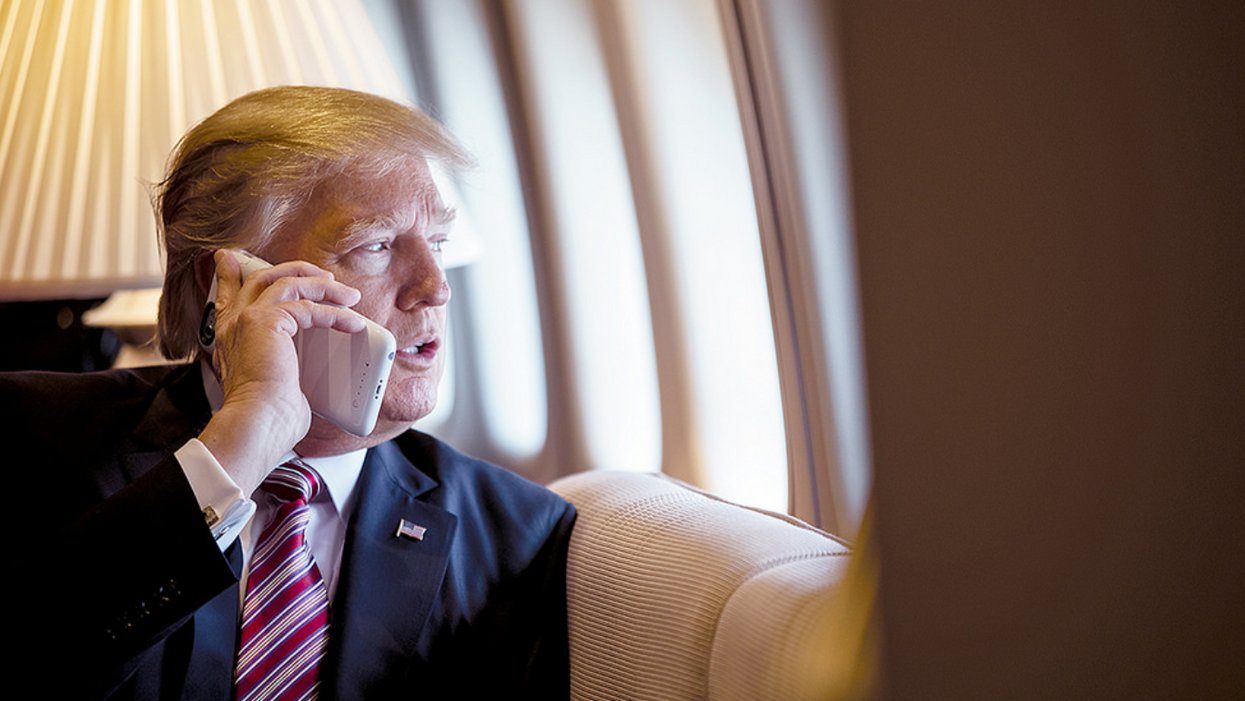 President Donald Trump talks on the phone aboard Air Force One during a flight to Philadelphia, Pennsylvania, to address a joint gathering of House and Senate Republicans, Thursday, January 26, 2017. This was the President's first trip aboard Air Force One. (Official White House Photo by Shealah Craighead)

Former President Donald Trump said Monday that elimination of the legislative filibuster would be "catastrophic for the Republican Party."

Trump's remarks on the inaugural episode the right-wing podcast "The Truth with Lisa Boothe" came as progressive lawmakers and groups continue to criticize the Senate rule requiring most legislation to reach 60 votes to advance—calling it a "Jim Crow relic" that's standing in the way of popular and necessary legislation.

Senate Minority Leader Mitch McConnnell (K-Ky.), said Trump, is "hanging by a thread right now with respect to the filibuster."

"And if they get the [filibuster], he's hanging on Joe Manchin, who always goes with the Democrats," Trump said of the conservative Democratic senator from West Virginia.

"Joe talks, but he ends up going with the Democrats," said Trump.

"Now there's another great senator from the state of Arizona," Trump said of another conservative Democrat, Sen. Kyrsten Sinema of Arizona. "He's hanging by a thread and if they get rid of the filibuster, if they knock it out, it will be catastrophic for the Republican Party," said Trump.

McConnell, for his part, said on the Senate floor last week that elimination of the filibuster would lead to "chaos" and, once Republicans were in the majority, they would retaliate by passing "all kinds of conservative policies" including anti-worker so-called "right-to-work" legislation and a "Massive hardening of security on our southern border."

Manchin, meanwhile, has not backed elimination of the filibuster but said this month support a return to the talking filibuster because the tool "really should be painful and we've made it more comfortable over the years," because minority senators can obstruct legislation by simply filing their objections.

President Joe Biden has also indicated his support for bringing back the talking filibuster during an interview with ABC News' George Stephanopoulos last week.

"I don't think that you have to eliminate the filibuster, you have to do it what it used to be when I first got to the Senate back in the old days," Biden said. "You had to stand up and command the floor, you had to keep talking."

The introduction in the Senate last week of the For the People Act further catalyzed progressives' demand for getting rid of the archaic tool.

"While GOP lawmakers across the country propose legislation that would strip millions of Americans of their right to vote, Senate Democrats have introduced sweeping legislation that would protect voting rights, reduce the impact of big money in our elections, and add tens of millions of eligible Americans to the voter rolls," Stand Up America president Sean Eldridge said in a statement last week.

He said that there's "too much is at stake to delay a vote on this critical legislation or to allow archaic Senate rules to kill the bill."

"The only path forward now for Democrats to stop Republicans from suppressing the vote," added Eldridge, "is to swiftly end the filibuster and pass the For the People Act now."