Are Madison Cawthorn's lies finally catching up with him? 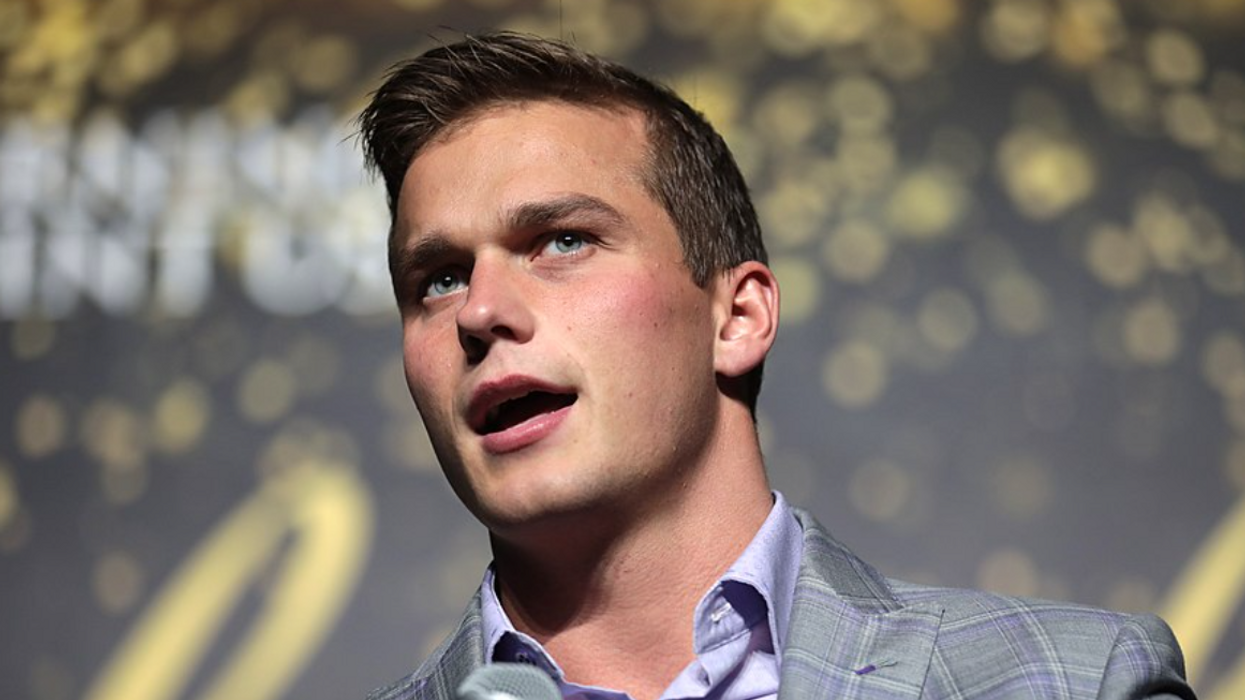 U.S. Congressman-elect Madison Cawthorn speaking with attendees at the 2020 Student Action Summit hosted by Turning Point USA at the Palm Beach County Convention Center in West Palm Beach, Florida, photo via Gage Skidmore.
Jon Skolnik
and
Raw Story
March 03, 2021
Republican Rep. Madison Cawthorn of North Carolina is suddenly facing a cascade of bad news that threatens to undermine the rising GOP star just as he begins to troll his way to the top. Amid a string of sexual misconduct allegations that resurfaced last week, Cawthorn has been accused of lying about the car crash that left him partially paralyzed years ago.

On Saturday, Buzzfeed News published a report interviewing over three dozen people from Cawthorn's past who corroborated accounts that the now freshman Republican congressman has a history cornering women with sexual advances. According to the report, Cawthorn would take women on "fun drives" during his time at Patrick Henry College where he would allegedly take women on back roads routes around campus and attempt to kiss or touch them inappropriately. Cawthorn is accused of pressuring one woman to sit on his lap, and when she resisted his attempts to kiss her, he allegedly held her face in place so she couldn't get away.

Over 150 of Cawthorn's former classmates signed a letter confirming the veracity of the allegations made against him. "During his brief time at the college," it read. "Cawthorn established a reputation for predatory behavior. His modus operandi was to invite unsuspecting women on 'joy rides' in his white Dodge Challenger. Cawthorn would take young women to secluded areas, lock the doors, and proceed to make unwanted sexual advances."

Although it's not the first time these allegations have surfaced, many of the details are new. Cawthorn, for his part, has vehemently denied them. Back in September of 2020, Cawthorn told CNN, "I have never done anything sexually inappropriate in my life."

On Saturday, the Washington Post brought forward a new claim made against Cawthorn: He lied about the car crash which left him partially paralyzed. According to the report, Cawthorn's account both exaggerates key details of the story, which he recounted in 2017 during a chapel address at Patrick Henry College:

"He was my brother, my best friend. And he leaves me in a car to die in a fiery tomb. He runs to safety deep in the woods and just leaves me in a burning car as the flames start to lick my legs and curl up and burn my left side. Fortunately, there was several bystanders who come by and they break the window open that they pulled me out to safety and they sat me down. The paramedics arrive and decided that I'm gone and I have no pulse, I have no breath. And I was, I was declared dead on the scene. For whatever reason, may it be adrenaline or divine intervention, I definitely believe it's the latter, I had a deep inhale of breath."

The friend detailed in Cawthorn's story, however, gave the Post a very different account of what transpired.

"That statement he made was false," said his friend, Bradley Ledford. "It hurt very badly that he would say something as false as that. That is not at all what happened. I pulled him out of the car the second that I was able to get out of the car." Ledford also alleged that Cawthorn was not "declared dead," but rather, incapacitated.

During his recovery, Cawthorn reportedly told doctors that he would "be at the Naval Academy by Christmas," even though Cawthorn himself later admitted in a lawsuit that he had been rejected by the academy prior to the crash. In a deposition conducted for the lawsuit, Cawthorn claimed to have "no memory from the accident." As Salon reported, Cawthorn's family enlisted the help of family friend and Trump's former chief of staff Mark Meadows, whose son found a top Florida attorney to add firepower to Cawthorn's case. Cawthorn was awarded a $3 million payout and is still seeking $30 million.

In the past, Cawthorn has also lied about the success of his business.

His campaign ads repeatedly made the claim that the Representative was a successful business owner. However, his real estate investment firm, SQR Holdings, recently reported zero income, with Cawthorn as the sole employee.

Cawthorn also alleged during the campaign trail that, prior to casting his bid, he was training for the 2020 Paralympics Games, intending to compete in the 400-meter dash. "I had an opportunity for the Paralympics for track and field," he told Christian podcast The Heal. However, no such "opportunity" materially existed. Cawthorn has no record of competing in any qualifying races and was not included in the registry of athletes considered by the The International Paralympic Committee –– list which is publicly available.

On Tuesday, Rep. Cawthorn was brought onto Fox & Friends First for an interview about the purported cancellation of Dr. Seuss. Although Cawthorn is currently embroiled in all kinds of allegations of lying and misconduct, the hosts failed to ask him anything about such concerns.