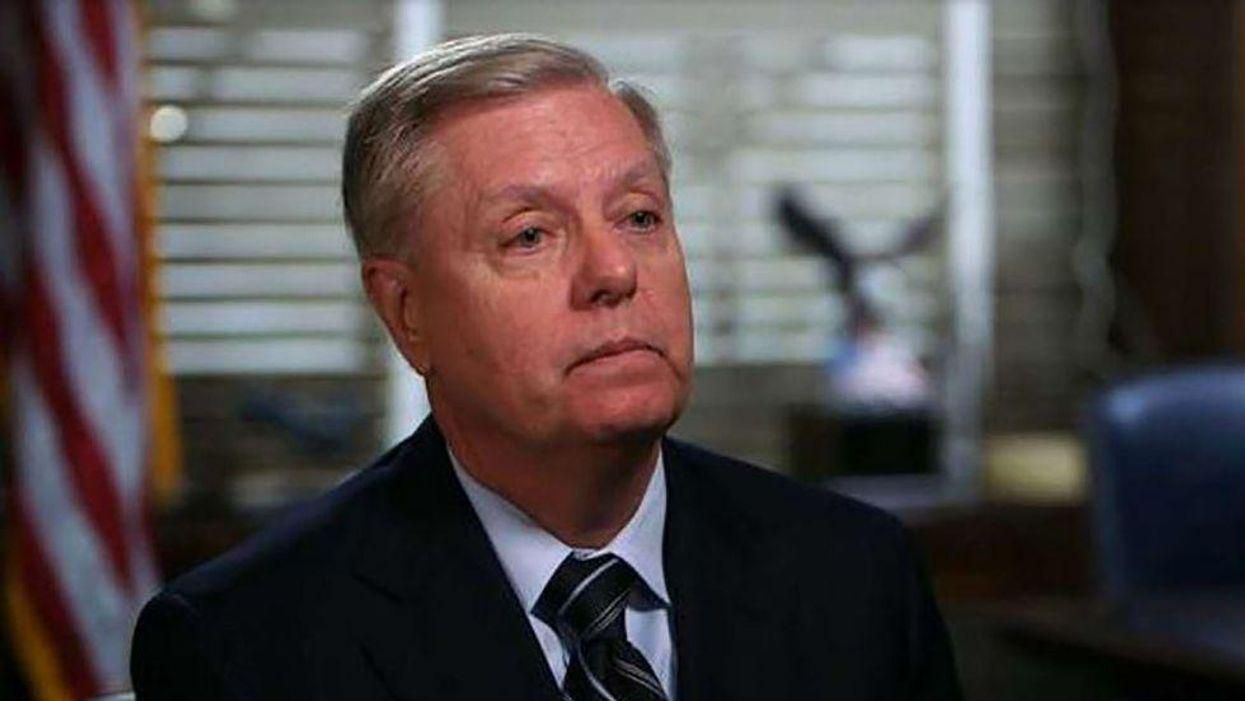 In a Fox News interview, Sen. Lindsey Graham, R-S.C., admitted on Wednesday that Georgia's new GOP-backed voting law––which, among other things, makes it illegal to give food and water to Georgia voters waiting in line––doesn't "make a whole lot of sense."

On Sunday, Fox News anchor Chris Wallace took aim at the sheer absurdity of the last measure, asking Graham, "Senator, why on earth if Americans are willing to wait for hours to vote, would you make it a crime for people to come and give them a bottle of water?"

"Well, all I can say is that doesn't make a whole lot of sense to me," Graham responded. "I agree with you there."

Section 33 of SB202, Georgia's voting law, states the following: "No person shall solicit votes in any manner or by any means or method, nor shall any person distribute or display any campaign material, nor shall any person give, offer to give, or participate in the giving of any money or gifts, including, but not limited to, food and drink, to an elector, nor shall any person solicit signatures for any petition, nor shall any person, other than election officials discharging their duties, establish or set up any tables or booths on any day in which ballots are being cast."

The law, which follows President Joe Biden's win in the state as well as the defeat of the state's two incumbent GOP senators, is part of a broader GOP push to heighten voting restrictions throughout the nation. According to the Brennan Center for Justice, 43 states have introduced over 250 Republican-backed bills that intend to restrict voting. Last week, Biden condemned the recent wave of voter-suppression bills as "sick and "un-American," specifically calling the new law in Georgia "Jim Crow in the 21st Century."

"Any time a Republican does anything, you're a racist, if you're a white conservative, you're a racist," Graham complained to Wallace. "If you're a Black Republican, you are either pop or Uncle Tom. They use the racism card to advance the liberalism agenda. H.R. 1 is sick, not what they're doing in Georgia."

The South Carolina Republican also criticized Biden's recent claim that the filibuster is rooted in racism of the Civil Rights era, a conclusion shared by former President Barack Obama. "You know what's sick is that the President of the United States played the race card continuously in such a hypocritical way," Graham noted.

Voting rights activists have called upon Georgia's corporate sector to raise awareness of the Republican electoral attack. Companies like Coca-Cola and Delta Airlines have been targets of "intense criticism" for not coming out against the new law. Some activists have called for a boycott of any business that does not explicitly oppose the law.

Last Thursday, three groups –– New Georgia Project, the Black Voters Matter Fund, and Rise –– announced a lawsuit intended to block the bill, arguing that it puts "unconstitutional burdens on the right to vote."

"None of the bill's burdensome and discriminatory changes to Georgia's election code will increase the public's confidence in the state's election administration or ensure election integrity," the groups argued. "Rather, the grab bag of voting restrictions that populate SB 202 make clear that the Bill was animated by an impermissible goal of restricting voting."