Arizona Sen. Kyrsten Sinema was the first Democrat elected to the Senate in her state in 30 years. The birthplace of the modern conservative movement, her 2018 victory was considered a massive coup for Democrats.

Yet two years later, Democrats comfortably won the other Senate seat while Joe Biden narrowly won its presidential electoral votes. This isn't Barry Goldwater's Arizona. Yet Sinema doesn't seem to have realized that, acting as if her state is akin to Joe Manchin's West Virginia. She has gleefully courted coverage like this: "Kyrsten Sinema's defense of the Senate's age-old rules is likely to frustrate progressives eager to use every tool at their disposal to advance their priorities." She didn't just oppose a minimum wage hike, she did so with utter glee, with the thumbs-down heard around the world.

As a result, we have one Arizona Democrat who is a solid and safe Democratic vote, and the other one who is a pain in the ass. And now we have polling that conclusively shows that Sinema's popularity is being pummeled by her obstinance. 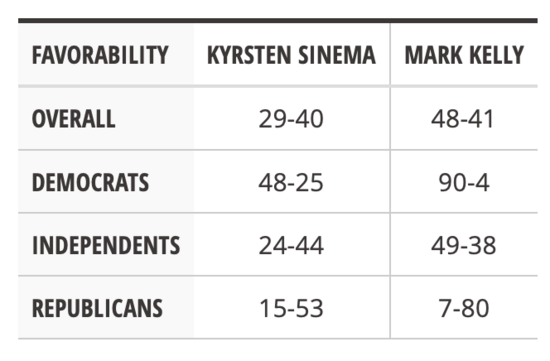 Look at Sinema's trendline in the two years she's been in the Senate:

She went from 41% favorable, 35% unfavorable at the start of February, to 29% favorable, 40% unfavorable—a dramatic overnight 17-point net drop. As you might imagine, her numbers among Democrats have dropped precipitously:

That's a +23 net favorability rating, down from +53. Now if you were to ask Sinema, she'd likely laugh this off. She thinks Arizona is a bunch of Republicans, hence no need to keep Democrats happy. But here's her problem—her antics aren't just pissing off Democrats. She's also losing ground among Independents.

She is now deeply underwater among independents, going from a +6 net favorable rating, to -20 today. As for Republicans? They never liked her and still don't, she's gone from 16% favorable, 57% unfavorable, to 15-53 today. No wonder her overall numbers have cratered to that extent!

So how does freshman Sen. Mark Kelly compare? Note, he's been a reliable Democratic vote, hasn't caused any waves, isn't creating any problems. Voted for the $15 minimum wage. So what does Arizona think of him?

It's even better among independents!

Kelly is at 49-38 among independents, while Sinema is at 24-44. And this is after establishing a reliably liberal voting track record, including that fateful minimum wage hike.

Sinema appears oblivious to her state's changes. We're no longer talking about the Arizona that birthed the modern conservative movement. Rather, it's the Arizona with rapidly growing and politically engaged Latino and American Indian communities, as well as shifting educated suburbs.

About the only good news for Sinema is that she doesn't face reelection for another four years. But at this current trajectory, her reelection is nowhere near assured, much less surviving what should be an inevitable primary.