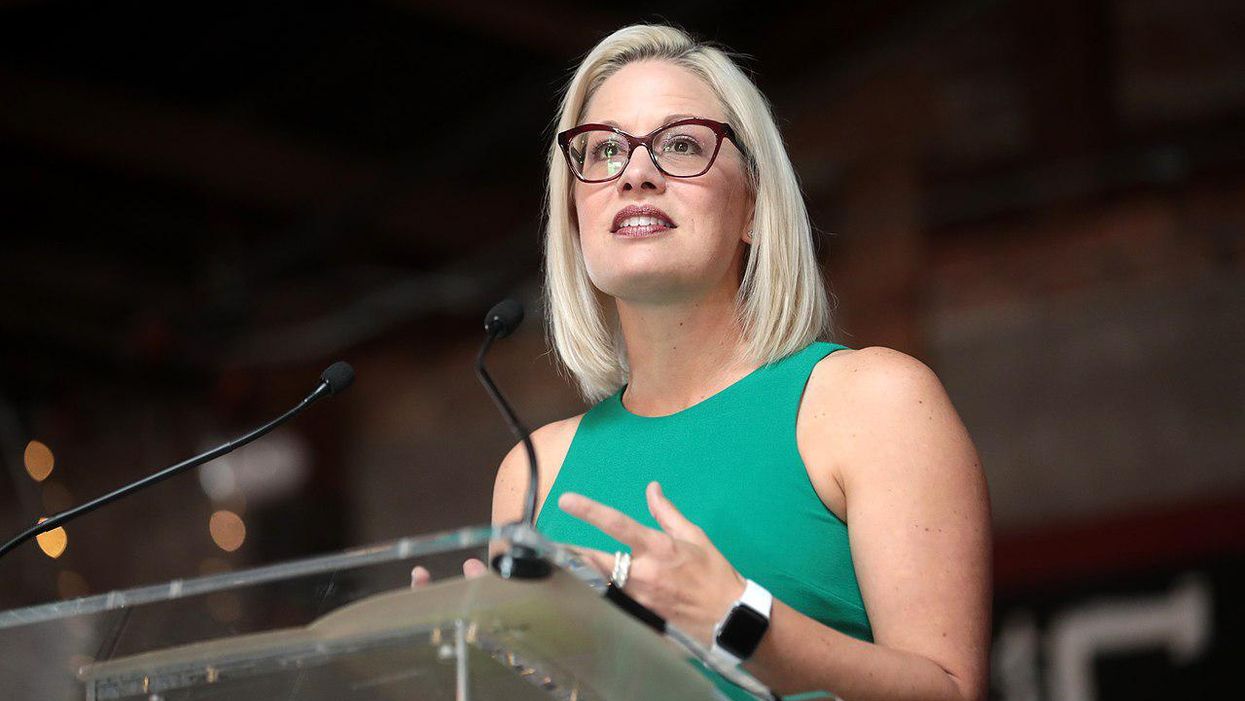 Standing in stark contrast to Sen. Kyrsten Sinema's dramatic thumbs-down vote against including a $15 federal minimum wage in the American Rescue Plan, an analysis of survey results published Monday by Data for Progress and MoveOn found that a majority of voters represented by the Arizona Democrat favor such a raise, support that is nationwide in scope and could portend re-election peril for Democrats who continue to stand against the popular poverty-reducing move.

The survey (pdf) found broad support for raising the minimum wage to $15, with 61% of all respondents in favor compared to 37% against. The "strongly support" option was the most popular overall response, at 36%. Support for $15 is, unsurprisingly, strongest among Democrats, at 89%. However, 54% of independents and 39% of Republicans also favor the raise.

The polling for the new survey, which took place last month, preceded President Joe Biden signing the American Rescue Plan earlier this month. When asked if they support a $15 federal minimum wage as part of the $1.9 trillion coronavirus relief and recovery law, a similar percentage (60%) of all respondents answered affirmatively, with support ranging from 87% among Democrats to 55% of indpendents and 38% of Republicans.

The survey found that Sinema's opposition to raising the minimum wage could threaten her 2024 re-election prospects. Respondents were asked what they would do if she opposed or weakened the stimulus bill over disagreement with provisions including a $15 minimum wage. Forty-seven percent overall said they were less likely to vote for Sinema, with the figure rising to 60% for Democrats and 52% for independents.

With Sinema having won her Senate seat by just over two percentage points in 2018, and with the survey finding that only 42% of respondents view her favorably, proponents of a minimum wage are hoping political expediency will change the senator's mind.

"The verdict is clear," concluded Data for Progress senior writer Lew Blank, "in Arizona, voting to raise the minimum wage is the smartest political move."

"To better represent Arizona voters and maximize her chances of winning reelection, Sen. Sinema should embrace the $15 minimum wage and push for more stimulus," he added.

Proponents of a $15 minimum wage say the Arizona survey, and others like it across the nation, are cautionary tales for Democratic lawmakers who continue to resist the growing majority consensus in favor of the raise. A recent Ipsos poll conducted in concert with Amazon—which despite its many worker-averse policies and actions pays at least $15 an hour—found that two-thirds of Americans with an opinion on the matter favor a $15 minimum wage.

Senators who back a $15 minimum wage will likely lean on this broad public backing as they meet Tuesday in an attempt to find a way to make the raise a reality despite the setback of its exclusion from the pandemic stimulus bill. Senate Majority Leader Chuck Schumer (D-N.Y.) and Sens. Bernie Sanders (I-Vt.), Patty Murray (D-Wash.), and Ron Wyden (D-Ore.) will sit down with the eight members of the Democratic caucus who voted against Sanders' proposal for including the raise in the legislation. In addition to Sinema and Angus King, the Independent from Maine, the other Democrats are: Sens. Tom Carper (Del.), Chris Coons (Del.), Maggie Hassan (N.H.), Joe Manchin (W.Va.), Jeanne Shaheen (N.H.), and Jon Tester (Mt.).

According to the nonpartisan Congressional Budget Office, Sanders' bill would have raised the pay of 27 million U.S. workers over the next four years and lifted 1.3 million people out of poverty.

Currently, 29 states plus Washington, D.C. have minimum wages exceeding the $7.25 hourly floor enacted in 2009, including Arizona at $12.15. At $15, Washington, D.C. now has the nation's highest non-local minimum wage, while California, Connecticut, Illinois, Maryland, Massachusetts, New Jersey, and New York all have a graduated minimum wage that will hit $15 within the next two years. Last year, Florida voters approved a gradual minimum wage increase to $15 by 2026.

EPI says implementing a $15 minimum wage by 2025 as proposed by the Raise the Wage Act would lift 3.7 million people in the U.S. out of poverty—figures with which even Wall Street titan Morgan Stanley concurs.

According to the progressive Center for Economic and Policy Research, if the minimum wage had kept pace with growth in inflation and productivity since 1968, it would be over $24 today.