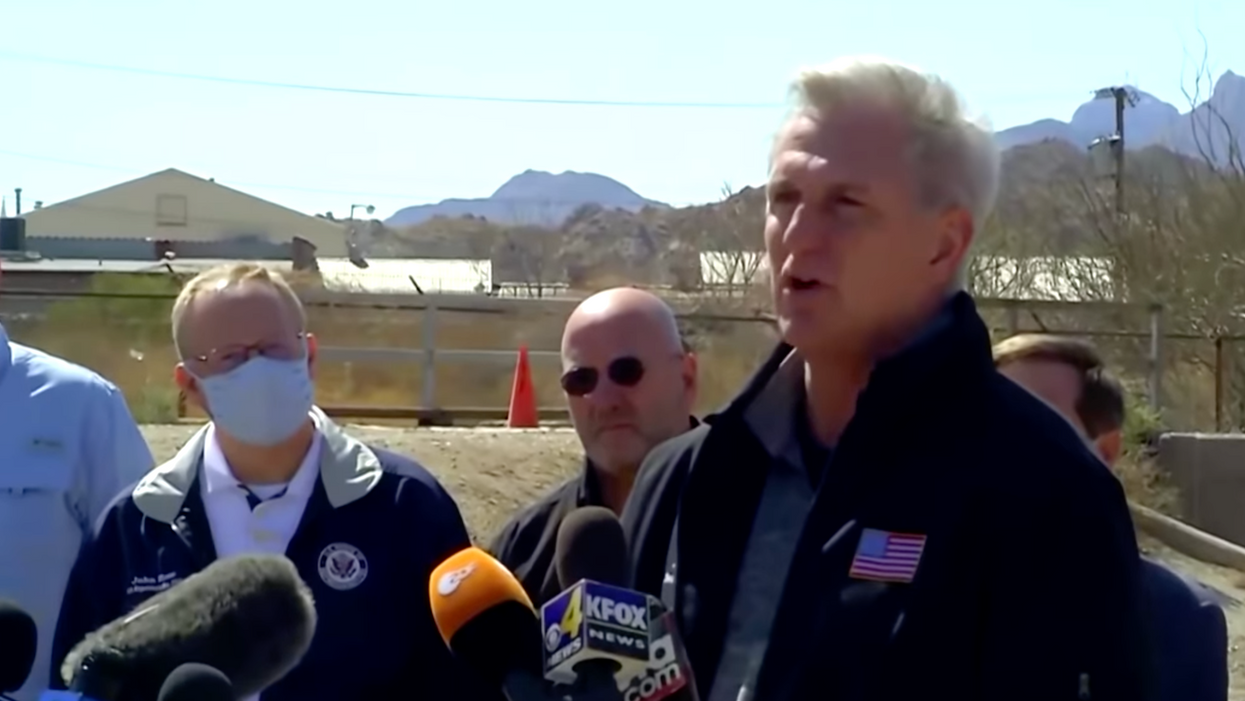 The Republicans have failed so far to land any punches on the new president or the Democrats newly in control of the United States Congress. They tried "cancel culture." They tried Dr. Seuss. They tried Mr. Potato Head. They tried lying (obviously). But nothing so far has breached the membrane of Fox News and other right-wing media. This is why many of them seem downright relieved to discover a "crisis" on the border.

Let's be clear. There is a real crisis, but it's not the fake crisis the Republicans want you to believe. For the last year or so, teenagers and children have been attempting to cross the southern border without any adults by their sides. Where there was at first a trickle, there is now a steady stream. As many as 500 minors are crossing over daily.

Joe Biden reversed the former president's policy of turning them away, leaving them to fend for themselves in Mexico. The current president deployed the Federal Emergency Management Agency over the weekend to bring them in, take care of them, reconnect them with family or find them foster homes. This is a massive undertaking. Mistakes will be made. Someone's going to fall through the cracks. But the policy is a good one.

The Republicans don't want you to see the need for humanitarian aid, though. They want you to see it as a crisis—an emergency the president must do something about. So far, the press corps has been obliging the Republicans, framing the story as one of politics instead of logistics, with vague questions about how Biden is going to "handle" the situation before asking Congress to reform the immigration system. Unsaid in reporting thus far is that the Republicans have not offered any solutions.

That's because solutions are hardly the point. On Monday, House Majority Leader Kevin McCarthy led a delegation of Republicans to the southern border. He gave voice to that faction of the Border Patrol still loyal to the former president and his dream of sealing off the country to Black and brown people. These fascists told McCarthy, "You saw it in their eyes. They're on the list," which is to say, the terrorist watch list. "We asked [agents] what countries are people coming from," McCarthy said. "Yemen, Iran, Sri Lanka, that's what's coming across. They even talked about Chinese, as well."

Yeah, no. First, because that fascist faction of the Border Patrol I told you about was scaring people with tall tales of terrorism long before the current president arrived. Second, because what kind of Nazi do you have to be to characterize teens and children as terrorists? Third, because McCarthy's Democratic colleagues, some representing border districts who know what they are talking about and some sitting on intelligence committees that are regularly briefed by national security agencies, have wondered aloud whether McCarthy is wrong or lying. Hmm, that's a hard one.

What the Republicans are doing should be familiar. They are creating conditions so their conventional propaganda is plausible enough to be repeated in the mainstream press. Breaching the right-wing media membrane is important to persuading white voters in the suburbs to give the Republicans a second chance. As for the propaganda, it is as follows: the Democrats care about immigrants more than they care about (white) Americans. The Democrats are trying to take something away from deserving (white) people and giving it to undeserving (non-white) people. This is the goal. Solving the crisis isn't. This is all prelude to the midterms in less than two years.

I'm not sure how GOP propaganda is plausible anymore. The Republicans claim to be concerned about immigrants bringing the new coronavirus with them. But these are the same Republicans most responsible for more than half a million deaths by covid in the last year. These are the same people most hostile to the inconvenience of wearing a mask. (Fox's Tucker Carlson is now the unofficial leader of the anti-vaccine movement.) I'm not sure why anyone would give the Republicans credit for being worried about teenagers and kids worsening the pandemic when they haven't done anything about it.

The Republicans claim to stand against terrorism. That's rich. On the same day Kevin McCarthy voted to object to the certification of the Electoral College votes, a mob of armed insurgents, incited by the former president, sacked and looted the United States Capitol in an attempt to bring down the American republic itself. Among them were domestic terrorists the likes of whom the FBI says are a singular security threat. The greatest risk to law and order isn't undocumented immigrants. It's other (white) Americans, people whom GOP Senator Ron Johnson has said "love this country."