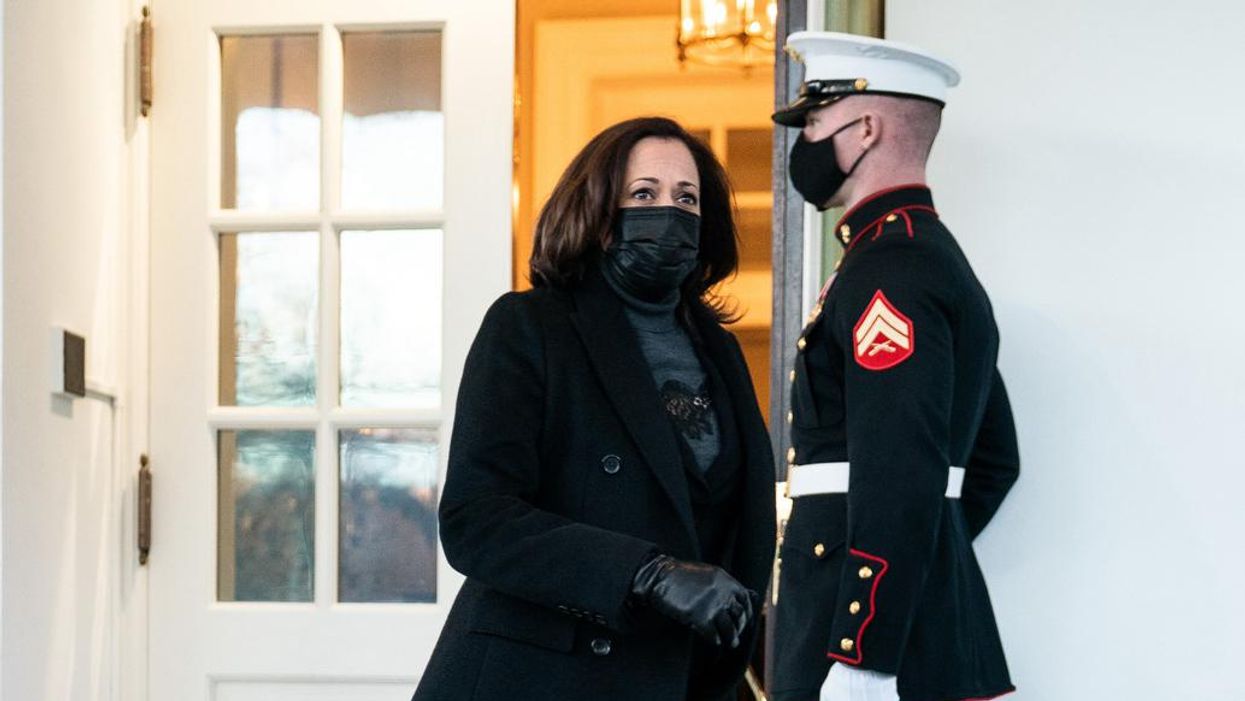 The vice president was the subject of brief but tempestuous scandal-mongering earlier this week. High-profile cranks and authoritarians accused Kamala Harris of disrespecting members of the armed forces when she did not return a salute Monday.

Bernie Kerik, the former commissioner of the New York Police Department, said it was "DISGRACEFUL." "Kamala Harris refuses to salute the honor guard at the steps of the aircraft. It is a clear demonstration of her dislike for those in uniform, both law enforcement and military." Charlie Kirk, a handsomely paid liar, added a little more context: "Kamala Harris doesn't salute members of the military as she gets on Air Force Two, breaking with a customary tradition of respect. Remember when she and Joe Biden tried to sell the lie that Trump was the one who didn't respect the troops?"

The vice president does not have to do much to outrage fools like Kirk1 and Kerik.2 That's because their outrage has nothing to do with Harris' conduct, good or bad. They will say virtually anything about her, and a large portion of the population will believe them, because, you know, there's just something about her that's different. As Editorial Board member Issac J. Bailey3 put it, with respect to Barack Obama, lies work due to "the undercurrent in their messaging—that that Black dude in the White House had something up his sleeve, that there were sinister motives behind every decision."

But in Kirk and Kerik's outrage there's more going on than racism and laughable attempts at undermining trust in the first woman, and first woman of color, to be a heartbeat away from the presidency. They are saying, without saying, her identity as a woman is disgraceful (because who ever heard of a woman being in charge of anything, amirite?). They are saying, without saying, that her republicanism4 is disgraceful to the point of illegitimacy. This is demonstrated by their particularly intense focus on the salute, and what that military gesture means to the hierarchy of authority in a republic.

Most presidents did not return salutes to members of the armed forces, because most presidents had reverence for a feature that makes the United States very different from most of world history's forms of government—the civilians are in charge. Indeed, some presidents did return salutes (and anyway, who's going to stop them?), but the military salute did not become a "customary tradition of respect" until Ronald Reagan. Every president since the 1980s has habitually returned salutes to men and women in uniform, mostly because if they did not, they'd get hell from the Washington press.

That's what happened to Bill Clinton. His experience with the press corps may have deepened the "customary tradition" more than anything Reagan did. The former president was already under a cloud of suspicion as a draft-dodger, which he was, so it's probable that his sloppy saluting was of legitimate concern. But by the time his aides realized he didn't have to salute, as the press corps was saying, he'd gotten so good as it, he didn't stop. But in conceding the point, Bill Clinton ceded one of the founding principles. We don't live in a military regime. We live in a democratic republic. A young Chris Matthews, known back then as Christopher, said it well:

The ritualized salute inaugurated by the Reagan reign fuzzes the line between the country's civilian leader, the president, and the armed forces whose duty lies in serving him. … We have had some extremely patriotic presidents—I can think of Franklin Roosevelt, John F. Kennedy, Lyndon Johnson—who managed to lead the country without greeting sailors, soldiers and Marines as if our elected president was one other office in uniform. He's not. The president of the United States does not wear a uniform, and for a reason. He did not rise through the military ranks, nor does he, in any imaginable way, owe his office as commander-in-chief to the military forces. He represents a republican form of government dependent on regular election by the people. He is a civilian and he should act like one. He no more need adopt the military form of greeting than the military form of dress.5

In this sense, not saluting is the proper military gesture. (The commander-in-chief sits atop the chain of military authority.) Not saluting is also the proper republican gesture. (The president is the representative of the ultimate sovereigns, the people, and is not beholden to military power.) That some presidents choose to salute is, I think, their business. That some people insist on it as a matter of "customary tradition" suggests more about them than it does about the president (or the vice president, as the case may be). "Disgraceful" to Kerik wasn't Harris "failing" to salute. Disgraceful was the vice president, a product of democracy, failing to respect their fetish for a martial order. They don't want a president to govern equitably. They want a commander-in-chief to rule imperiously. And, of course, that commander can never be a woman.