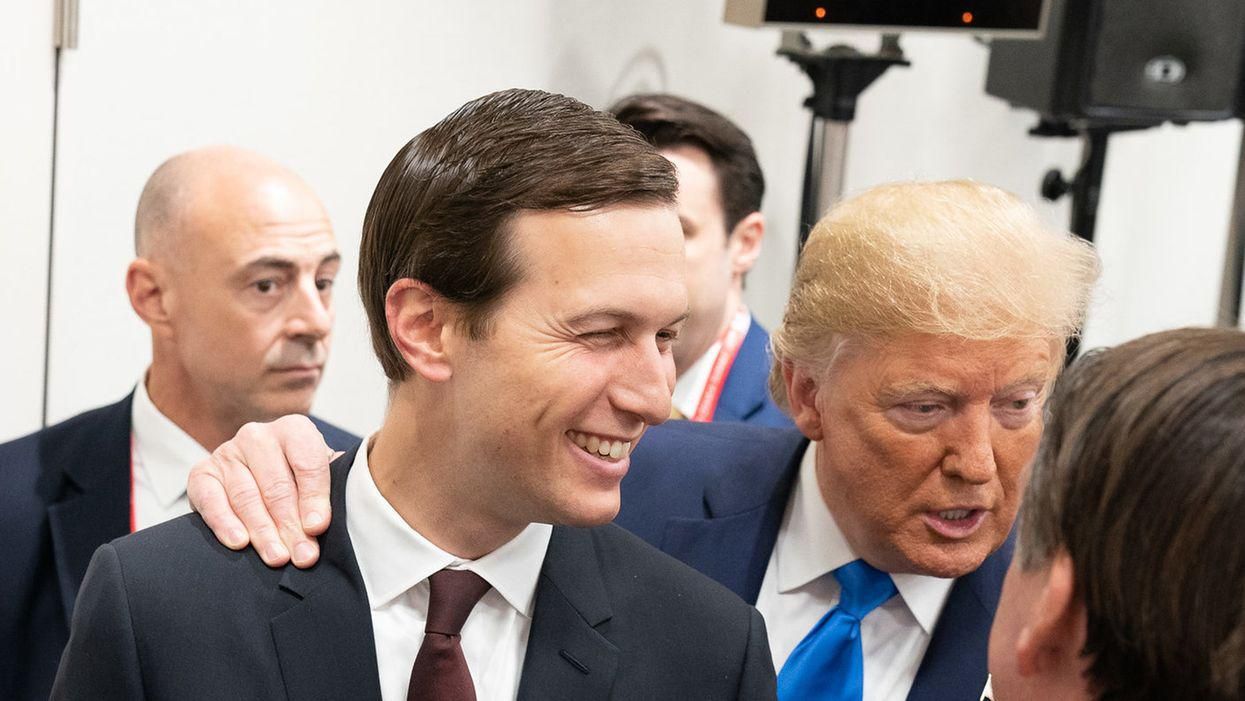 Former President Donald Trump's son-in-law Jared Kushner left taxpayers with a hotel bill for more than $24,000 on his way out of the White House, according to a new federal filing.

Kushner met with Israeli Prime Minister Benjamin Netanyahu, who last month pleaded not guilty to three corruption charges, and visited the U.S. embassy that Trump had relocated from Tel Aviv to Jerusalem. Shortly after the trip, Kushner Companies sought to raise more than $100 million in Israel.

During the visit, Kushner touted Trump's controversial embassy relocation for leading to an "explosion of peace" in the Middle East, even though the decision has been widely condemned by Arab countries, as was Kushner's failed attempt at a peace deal between Israel and the Palestinians.

Kushner praised Trump's role in striking new diplomatic agreements between Israel and the United Arab Emirates, Bahrain, Sudan and Morocco, which Trump and Netanyahu touted as "historic," though some Middle East observers worry that the administration's sweeteners to coax the majority-Muslim nations into the accords could risk escalating conflict in the region. The administration agreed to sell fighter jets to the UAE, recognized Morocco's sovereignty over a long-disputed Western Sahara region, and granted Sudan immunity in American courts from terrorism lawsuits as part of Trump's pre-election diplomatic effort.

The trip came after Kushner and his wife, Ivanka Trump, racked up big taxpayer bills with vacations to Charlottesville, Aspen, the Dominican Republic and Canada while forcing Secret Service to pay thousands per month to rent an apartment near their Washington home for the use of a bathroom after agents were instructed not to use theirs.

"Jared Kushner was there to cement his 5th peace deal for Israel in 4 months," he told the Daily Beast. "How much did John Kerry's trips cost where he accomplished nothing?"

Ric Grenell, Trump's former director of national intelligence, argued on Twitter that it was an "incredibly small price to pay for multiple Historic peace deals."

Kushner's trip came under scrutiny weeks later when the Wall Street Journal reported that Kushner Companies, his family's business, sought to raise at least $100 million by selling bonds in Israel, its first such effort. The move, which came shortly after Trump pardoned Kushner's father Charles for his 2005 conviction on tax evasion and witness tampering charges, quickly sparked concerns about a conflict of interest even though Jared Kushner sold off his stake in the company when he joined the White House.

Kushner sought to separate himself from his family's business, but he and Ivanka Trump continued to earn millions while at the White House. An analysis by the government watchdog group Citizens for Ethics and Responsibility in Washington (CREW) found that the couple reported earning between $172 million and $640 million in outside income while working in the administration.

The couple did not take a salary while working in White House positions that immediately raised questions about conflicts of interest and security clearances. But Kushner held onto his stake in a company called Cadre, which sold investment vehicles under the Opportunity Zones program created by the 2017 Trump tax cuts. Kushner's stake in the company — which he initially failed to disclose — was valued at $5 million to $25 million before growing to $25 million to $50 million, according to his financial disclosures. The top White House ethics official determined that it was "reasonably necessary" for Kushner to sell his stake, which he never did. Ivanka Trump also drew millions in income, including from her stake in Trump's Washington hotel, which was frequented by Republican allies and officials seeking to do business with the government.

"Apparently accountable to no one, Kushner and Trump acted as if the normal rules did not apply to them — because, in fact, they didn't," Jordan Libowitz, the executive director of CREW, wrote in an NBC News op-ed. "If there was ever a reason for Congress to pass stronger anti-nepotism laws, Kushner and Trump are it."