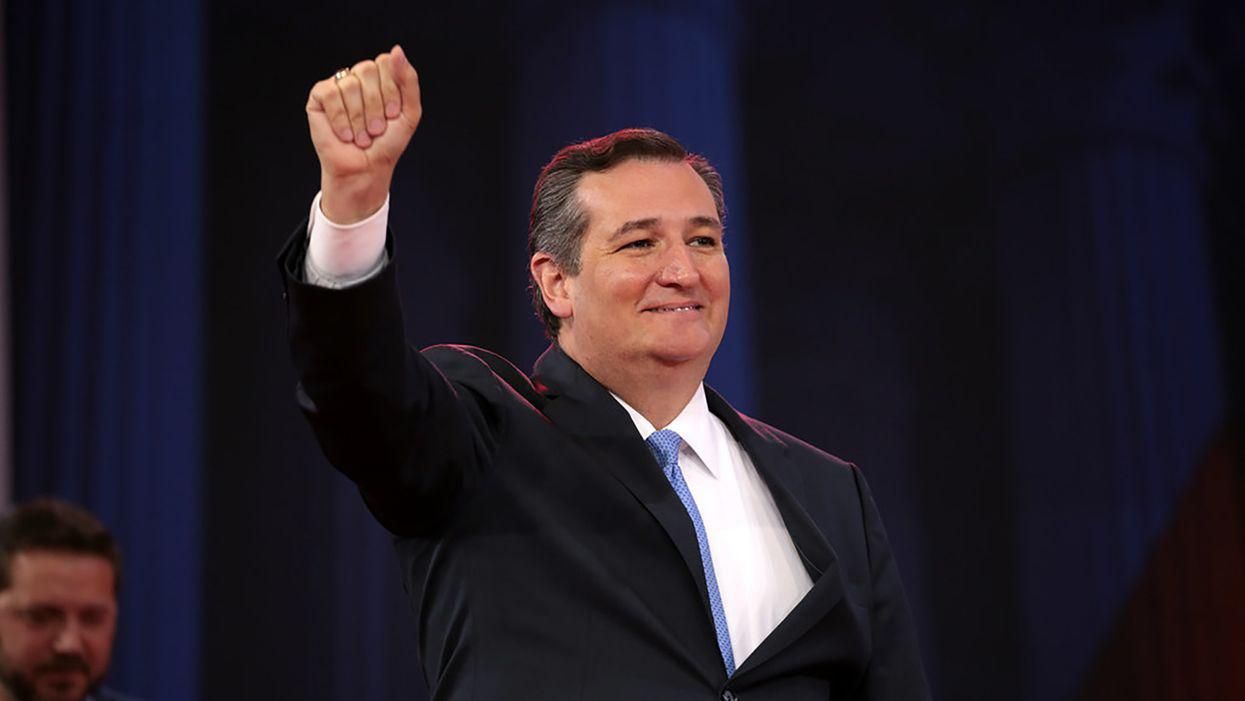 As Republicans attempt to portray the arrival of unaccompanied asylum-seeking minors at the U.S.-Mexico border as a threatening crisis caused by the Biden administration's supposedly lenient policies, immigrant rights advocates are warning that this right-wing framing of the situation is a "trap" designed to score political points while dehumanizing migrants.

"The GOP's framing of migrant children arriving at the border as a 'crisis' is nothing but a divide and distract tactic," America's Voice, an immigrant rights organization, said Saturday in a video statement. "Their focus on the border is a cynical and strategic racist play for political gain."

America's voice pointed to what Stephen Miller, a white nationalist and top adviser to former President Donald Trump, said last month: "From a purely political standpoint, [immigration] is a recipe for Democrats to have a historic drubbing in the midterms if we can make it even as big an issue or bigger than Obamacare."

The GOP calling migrant children who are arriving at the border a "crisis" is nothing but a divide and distract tac… https://t.co/jLEYuUuQpB
— America's Voice (@America's Voice)1616861040.0

As America's Voice noted, many in the GOP are "fully embracing" Miller's strategy. The National Republican Senatorial Committee "has already started running xenophobic dog-whistle ads" against President Joe Biden and congressional Democrats, and more than 32 GOP lawmakers have "used the hashtag 'BidensBorderCrisis' alongside hate groups and far-right media personalities."

The most high-profile stunt came Friday when more than a dozen congressional Republicans traveled to Texas, where they engaged in a "fear-mongering photo op," as America's Voice described the lawmakers' tour of the Rio Grande aboard machine gun-equipped boats.

If GOP senators are looking for a way to stop the unacceptable overcrowding of unaccompanied asylum-seeking minors… https://t.co/ZjAyliH149
— Jacob Soboroff (@Jacob Soboroff)1616799602.0

"For the GOP, the border is all about politics and cruelty, not policy," said America's Voice. The organization alluded to a tweet shared last week by Sen. John Cornyn (R-Texas) that criticizes Biden for "emphasiz[ing] the humane treatment of immigrants, regardless of their legal status," rather than following in the footsteps of former President Bill Clinton, a Democrat who cracked down on immigrants in the 1990s.

Congressional Democrats also sent a delegation to the border on Friday.

In sharp contrast to the GOP—which is "terroriz[ing] the children who are coming here to seek asylum," as journalist Jacob Soboroff put it—Rep. Joaquin Castro (D-Texas) said the purpose of their visit was to ensure that unaccompanied minors being detained in Texas are "treated humanely."

"This isn't about politics and it isn't about playing games," Rep. Ilhan Omar (D-Minn.) said Friday from the Carrizo Springs detention facility. "It's about the humanity of these children. It's about respecting their dignity and it's about empathizing on what it means to be in their situation."

Every child being detained deserves dignity and empathy. We have a chance to restore hope for the little girls an… https://t.co/u0N7K9rmH1
— Rep. Ilhan Omar (@Rep. Ilhan Omar)1616784845.0

America's Voice argued that "the GOP's coordinated efforts are meant as a tactical political distraction."

As the Washington Post reported Thursday, there has not been an uncharacteristic "surge" in migrants entering the U.S. at the southern border, but rather a predictable bump in border crossings that typically happens at this time of year, augmented by the arrival of people who would have come in 2020 but could not due to the clampdown on immigration during the Covid-19 pandemic.

The Los Angeles Times reported last week that "since March 20, 2020, when the Centers for Disease Control and Prevention issued its order invoking Title 42, U.S. border officials have claimed unchecked, unilateral authority to summarily expel from the country hundreds of thousands of" undocumented immigrants—including single adults, families, and even unaccompanied children and mothers with infant U.S. citizens—"without due process or access to asylum."

While Biden has kept the Trump-era policy in place for single adults and families, the White House last month reversed the previous administration's xenophobic "Remain in Mexico" policy for asylum-seekers and announced that it would not deport unaccompanied minors.

Thousands of migrant children are now being held in overcrowded facilities run by Customs and Border Protection (CBP), which falls under the Department of Homeland Security (DHS). Although DHS is supposed to transfer minors to the Office of Refugee Resettlement within 72 hours—after which children are housed in Department of Health and Human Services-approved shelters until they can be placed with a family member or another suitable sponsor—thousands have been stuck for far longer than legally allowed in squalid conditions.

The Post emphasized that the changes enacted by Biden are not responsible for the rise in border crossings: "We analyzed monthly U.S. Customs and Border Protection data from 2012 through February and found no clear evidence that the overall increase in border crossings in 2021 can be attributed to Biden administration policies. Rather, the current increase fits a pattern of seasonal changes in undocumented immigration combined with a backlog of demand because of 2020's coronavirus border closure."

"CBP has recorded a 28% increase in migrants apprehended from January to February 2021," the Post noted. "During fiscal year 2019, under the Trump administration, total apprehensions increased 31% during the same period."

"Migrants still came to the U.S. under the cruelty and chaos approach the GOP employed under Trump," America's Voice pointed out, which negates the claims of Republican lawmakers and right-wing media outlets that the recent uptick in apprehensions—part of a seasonal pattern—is a reflection of the Biden administration's deviation from the Trump administration's maximally cruel response to immigrants arriving at the U.S.-Mexico border.

According to America's Voice, "The new administration is fixing an intentionally broken mess and trying to build a safe, humane, and timely system to process asylum claims."

Biden has come under fire, however, for restricting media access to CBP's detention facilities, which some have described as "border jails."

Progressives, such as Denise Bell, Amnesty International USA's researcher for refugee and migrant rights, have acknowledged that unaccompanied minors need a safe place to stay "while the government identifies and reunites them with appropriate sponsors," but insist that detaining them for long periods of time in ill-suited facilities "cannot become status quo."

"Kids need a place to call home," Bell said. "That's why they should be with their families, friends, and community members; this in the child's best interests."

Meanwhile, in a Boston Globe column published Saturday, Marcela García criticized Politico for validating Stephen Miller—"the architect of family separation"—by seeking his input on the Biden administration's handling of migrants at the border.

Even though "Trump banned reporters and members of Congress from child detention centers in the summer of 2019," Politico allowed Miller to "gasligh[t] the public" with his opportunistic critique of Biden's lack of media transparency, García wrote.

Miller's appearance not only reflects media amnesia, but also the new obsession with the border, which is rife with falsehoods and phony narratives. It bears repeating: Foreigners who show up at our borders to request asylum are following American and international law. But some of the journalists at Biden's first press availability Thursday framed their border questions using the Republican, right-wing lens. As Washington Post columnist Greg Sargent noted, that's a deeply flawed exercise because it assumes that not letting migrant children into the United States is an acceptable option.
And yet, the false framing of calling what's happening at the border a "crisis" can be traced back to—wait for it—Miller himself. And some in the mainstream media were happy to follow suit.

America's Voice said that the GOP "hopes to fear-monger at the border to distract from their failures," which the organization listed: "Zero Republicans voted for the relief bill that gave Americans stimulus checks, extended unemployment, and helped reduce child poverty. They helped stoke a terrorist attack on the Capitol and refused to confront those responsible."

"Instead," the group added, Republicans "blame children seeking refuge," as Sen. Lindsey Graham (R-S.C.) did earlier this month when he said that "they are children today, but they could easily be terrorists tomorrow."

The framing of border crossings as a "crisis" is a "trap," argued America's Voice—one that "only helps dehumanize migrants... and perpetuates the GOP's strategic racism." The group implored people to not be deceived by right-wing lawmakers and media personalities who are "dividing Americans and distracting from the work of providing real solutions."

America's Voice added that if the GOP actually wants to reform the country's immigration system and improve migrant welfare rather than engage in photo ops at the border, there are several bills that have been introduced in Congress this year that Republican lawmakers could help pass.

If Republicans *really* want to help immigrants and do something on immigration, they can help pass these bills ⬇️ https://t.co/5MRLYcHe8o
— America's Voice (@America's Voice)1616887800.0