The filibuster is not some sacred institution 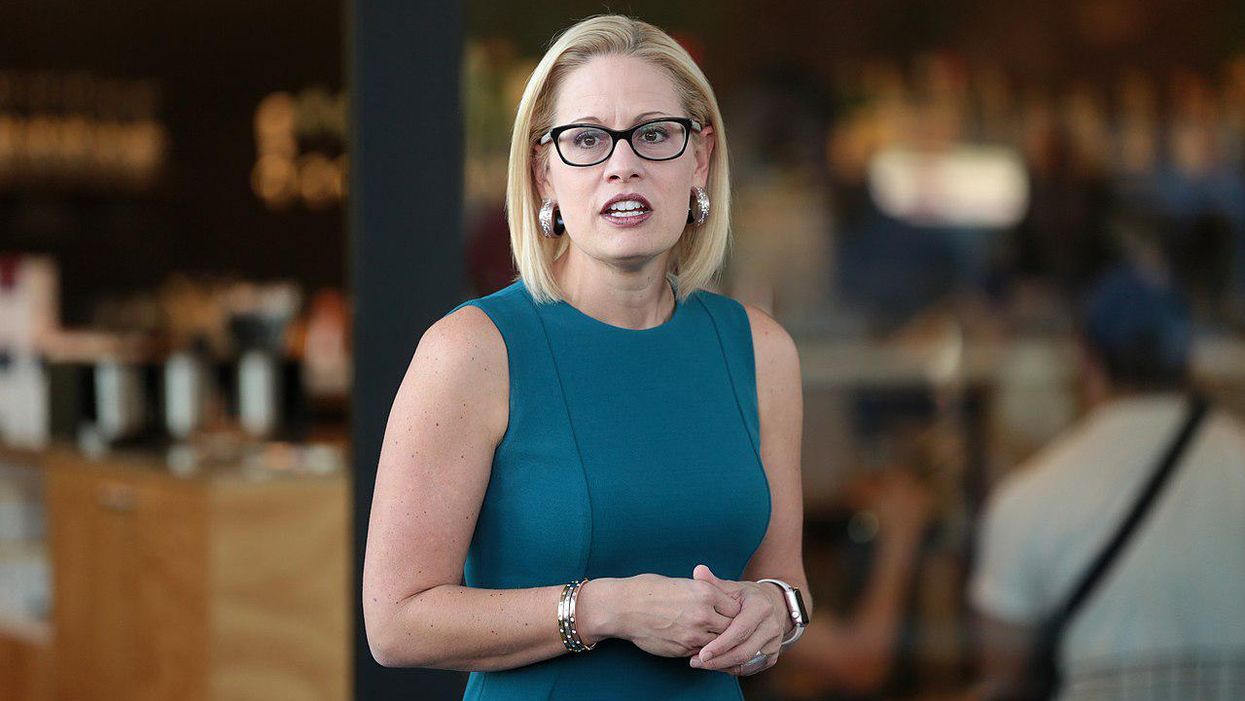 It's hard to imagine literally talking for an entire day, but that is what happened during the longest filibuster in Senate history. The year was 1957 and Strom Thurmond, a South Carolina white supremacist best known for running as a third-party presidential candidate nine years earlier, talked for 24 hours and 18 minutes to stall a major civil rights bill. It was the first major civil rights legislation since the 19th century, so Thurmond droned on and on and on. Nothing he said was particularly memorable, but he was determined to stop even the modest voting reforms contained in the proposed legislation.

On two occasions, however, Thurmond hit a snag: He had to go to the bathroom.

Fortunately for Thurmond, an Arizona senator named Barry Goldwater stepped in on those occasions to talk about a military pay bill so the staunch segregationist could relieve himself. (Goldwater later transformed the Republican Party into the far-right organization it is today through his 1964 presidential campaign.) Fortunately for America, the Civil Rights Act of 1957 wound up passing despite Thurmond's obstructionism, laying the foundation for voting rights and creating both the U.S. Commission on Civil Rights and the Department of Justice Civil Rights Division.

Unfortunately for America, the filibuster still exists — and may still be used to strip people of their voting rights. In fact, the filibuster itself could be fairly described as the single worst feature of U.S. Senate procedure. It exists because of a thoughtless error and has only infrequently been used for positive ends.

It's not an exaggeration to say that our Senate's version of the filibuster was basically created by mistake. As Brookings Institution senior fellow Sarah A. Binder explained when testifying before the Senate in 2010, both the Senate and House of Representatives used rule books tracing back to 1789 that were virtually identical. These included a "previous question" motion that is today interpreted in the House as meaning a simple majority can cut off debate. The Senate no longer has that rule, however, because Vice President Aaron Burr suggested in 1805 that the Senate's rulebook needed to be streamlined. It had not occurred to either chamber of Congress at the time that the rule could be used to cut off debate, so the Senate followed through on Burr's suggestion in 1806. (All of this happened after Burr's 1805 indictment for murdering Alexander Hamilton.)

Even so, it didn't occur to senators to abuse this oversight by filibustering bills to death until 1837. After that, the filibuster was rarely used until the mid-19th century, when the Senate became more polarized and issues (often involving voting rights) heightened partisan passions. By the 1880s filibusters were common, frustrating presidents and politicians on both sides who found that a single senator could destroy legislation supported by overwhelming majorities if they were willing to be shamelessly voluble. In 1917, when a group of senators filibustered a bill to arm merchant ships during World War I, President Woodrow Wilson decided enough was enough. With his prodding, the Senate adopted Rule 22, which said that two-thirds of senators could forcibly end a filibuster and bring a bill to vote (a process known as cloture). That threshold was later reduced to three-fifths in 1975, meaning that today you need 60 senators to shut up a filibusterer.

Since the 1970s senators have been able to filibuster without even talking; all they have to do is say that they plan on launching a filibuster against a given bill or motion to grind the Senate to a screeching halt. While some senators still seize the opportunity to grandstand (Ted Cruz memorably did this when opposing the Affordable Care Act in 2013, speaking for more than 21 hours and at one point reciting Dr. Seuss' "Green Eggs and Ham"), it isn't required or essential. This made it easier for Mitch McConnell to obstruct much of Barack Obama's agenda, even as minority leader in the Senate.

That brings us to the present. Even though President Biden's COVID-19 stimulus relief package is wildly popular, not a single Republican senator voted for it. McConnell, it is obvious, plans on trying to thwart Biden's agenda in the same way that he made life miserable for Democrats during the Obama era. While Democrats were able to push Biden's bill through via the budget reconciliation process, they won't be able to do so for most of the new president's agenda. Their only option, if they hope to get anything meaningful done, is to repeal the filibuster entirely, much as Republicans repealed it in 2017 relating to the confirmation of Supreme Court justices.

But in a 50-50 Senate, with Vice President Kamala Harris serving as the tiebreaker, Democrats can only repeal the filibuster if every single Democratic senator votes to do so.

That is where a specific faction of the Democratic Party — let's call them the "delusional centrists" — comes into play. That group mainly comprises two senators, West Virginia's Joe Manchin and Arizona's Kyrsten Sinema, who have repeatedly said that they love the filibuster and will never vote to ditch it. (Manchin suggested last weekend that he might be open to returning to a talking filibuster, then walked that back.) They claim that this is because they believe in the importance of bipartisanship and debate. It also seems likely that they say this because it further cements their status as swing votes in the Senate, forcing leaders from both parties to curry their favor.

Either way, by pretending that the filibuster serves some noble purpose, Manchin and Sinema ignore that its most conspicuous uses have been for evil causes.

American University historian Allan Lichtman provided Salon with a list of "harmful filibusters" by email. In 1946, "Southern Democrats successfully filibustered to stop consideration of a bill to create legislation to combat racial discrimination in employment," he wrote, and that certainly wasn't the beginning:

In 1846, Southern Senators successfully filibustered against an amendment to a bill for purchasing land from Mexico that prohibited slavery. Southern senators also used filibusters to stop anti-lynching bills in 1922, 1935, 1938, 1948 and 1949. Two filibusters during the Obama Administration blocked legislation to establish the DREAM Act for undocumented immigrants brought to the U.S. as children.

Eric Schickler, co-director of the Institute of Governmental Studies, wrote by email that "a lot of important legislation has been killed by the filibuster." He cited as one example "a bill protecting voting rights for southern Black voters" that was defeated by filibuster in 1891, and a legendary 1935 filibuster by Huey Long of Louisiana, who spoke for more than 15 hours to stop Franklin D. Roosevelt from removing a provision that would require Senate approval of senior employees in the National Recovery Administration. Long's goal was to stop his political enemies in Louisiana from obtaining powerful government jobs — to do so, Long even resorted to reciting his mother's recipe for pot liquor.

It's not true that the filibuster has always been used for bad causes, although the overall trend is certainly in that direction.

"While the most prominent and important uses for much of its history was to uphold Jim Crow and white supremacy in the South," Schickler said, "it has been used for other purposes as well — and now is used routinely by both parties. One of the early cases of it being used by liberals was to kill the Supersonic Transport plane project in 1970."

Yet while these examples suggest that the filibuster can occasionally be beneficial, its origins as a freakish mistake and its more common use as a tool for reactionary obstructionism — particularly to maintain white supremacy and stop voting rights — make it clear that it needs the old heave-ho. For one thing, Republicans are using Trump's Big Lie about the 2020 election as an excuse to pass new voter suppression laws, with 253 restrictive bills already being considered in 43 states. Between that and the anticipated wave of Republican gerrymandering, the GOP is clearly hoping to distort and undermine future elections such that it holds national and state power for the foreseeable future, regardless of the people's will. Democrats are trying to pass the For the People Act, which would ban partisan gerrymandering, establish automatic and same-day voter registration, allow people without voter ID to cast ballots as long as they swear on an affidavit and permit formerly incarcerated citizens to vote.

If this bill passes, elections will be much fairer and Republicans will have to win by actually earning more votes than their opponents (well, save in presidential elections, where the Electoral College still reigns). Naturally Republicans will filibuster this bill to death — and it boggles the mind that Manchin and Sinema, who would be just as vulnerable as every other Democrats to the erosion of democracy, appear ready to go along.

These are not the only important aspects of Biden's agenda that are at stake. Raising the minimum wage, fighting climate change, combating racism, protecting women's and LGBTQ rights, rebuilding infrastructure and enacting meaningful economic reform all depend on dumping the filibuster. Otherwise Republicans will make sure none of that happens.

If the filibuster were actually some venerable bulwark of democracy, enshrined in the Constitution and protecting good government, maybe a case for it could be made. None of that's true: It was born of absent-mindedness and has mostly been used as a tool of oppression. To preserve democracy — and basic human decency — the filibuster has got to go.