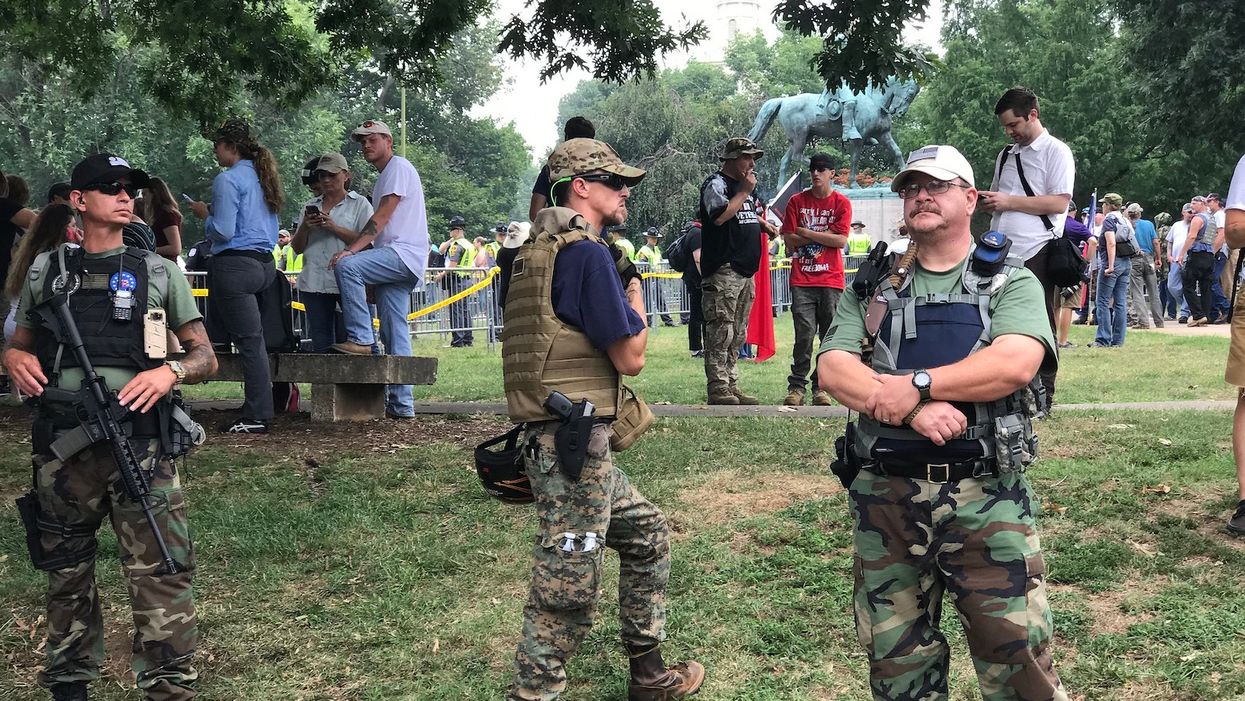 It became clear in the aftermath of the Jan. 6 Capitol insurrection—which included the participation of dozens of off-duty officers from around the country—that any effort to confront the right-wing extremism that fueled it would need to include police reforms that rooted such extremists out of the ranks of law enforcement. Now it appears that the FBI is turning its attention to the reality of such infiltration.

ABC News' Josh Margolin reports that a confidential intelligence assessment by the FBI's San Antonio division concludes that white supremacists and other far-right extremists would "very likely seek affiliation with military and law enforcement entities in furtherance of" their ideologies. The report also outlines the extraordinary threat that this infiltration poses both to those authorities and to the public generally.

The document, which was based on investigations between 2016 and 2020, was distributed to law-enforcement agencies in Texas and around the nation. It particularly focuses on neo-Nazis inspired by the white supremacist tract Siege, written by an associate of Charles Manson named James Mason, which advocates for the destruction of American democracy through "race war" and its replacement with a white ethnostate. These include the domestic terrorism organization Atomwaffen Division, whose members have been the subject of multiple FBI arrests in the past couple of years.

Titled "Siege-Inspired Actors Very Likely Seek Military and Law Enforcement Affiliation, Increasing Risk of Tradecraft Proliferation and Color of Law Offenses in the FBI San Antonio Area of Responsibility," the report's authors wrote that their assessment is "based on evidence [extremists] expressed a desire to join the military and law enforcement primarily to obtain tradecraft to prepare for and initiate a collapse of society, specifically by engaging in violence against the US government and specified racial and ethnic groups. Online peers encouraged them to seek these careers and [extremists] built relationships with associates seeking military employment, focusing on the associates' current and future martial skills."

The assessment also says extremists are "likely to seek to exploit familial and social connections when pursuing military and law enforcement employment, reducing obstacles and increasing opportunities ... to acquire tradecraft."

"When we asked the FBI last year to testify about white supremacists executing plans to infiltrate law enforcement entities across America, the bureau refused and told us it had no evidence that racist infiltration was a problem," Democratic Congressman Jamie Raskin of Maryland told ABC News in a statement. "Now, the January insurrection—and the growing evidence of off-duty law enforcement officers being involved in the attack on Congress—and this newly leaked report confirm in my mind that the FBI's failure to level with the American people about organized racist infiltration of law enforcement is having dangerous and deadly consequences."

The problem was evident well before Jan. 6. Police participation in the QAnon conspiracy theory became an issue over the summer as increasing numbers of law enforcement officers started showing up in support of the Trumpian conspiracy cult. An August 2020 report by the Brennan Center for Justice's Michael German examined far-right infiltration of law enforcement and concluded that authorities' efforts at preventing it and rooting it out were lackluster at best.

"Efforts to address systemic and implicit biases in law enforcement are unlikely to be effective in reducing the racial disparities in the criminal justice system as long as explicit racism in law enforcement continues to endure. There is ample evidence to demonstrate that it does," German wrote. He also noted that the Justice Department has no national strategy designed to identify extremist officers or to protect the communities they are assigned to serve.

The presence of ideologically sympathetic extremists within law enforcement also poses a security threat to any agency dealing with their criminal activities, particularly officers who keep any fascist affiliations secret and work to implement a far-right agenda from within the force.

"Police officers have access to sensitive information," explains associate Georgetown Law professor Vida Johnson. "For example, they might know if they're looking into the Proud Boys or the Three Percenters or the Oath Keepers, so they can tip them off. That's one reason why careers in law enforcement are so appealing to people who hold far-right belief systems. They get this opportunity to not only police people of color, to control their goings and comings and how they live their lives, but also they get this inside information about whether [far-right groups] are in fact being investigated."

American law enforcement has never systematically addressed the problem of extremism within its ranks, which historically speaking is not a new phenomenon at all, but has worsened dramatically in the past few decades. "It's clear that extremist groups on the right and white supremacists have been agents of chaos, of violence in our community, and the fact that police are just now interested in training on this, I find more than disturbing," Johnson told the Los Angeles Times.

Johnson, in a 2019 academic paper titled "KKK in the PD: White Supremacist Police and What to Do About It," found that police departments across the country exhibited evidence of white supremacist ideology, citing "scandals in over 100 different police departments, in over 40 different states, in which individual police officers have sent overtly racist emails, texts or made racist comments via social media."

"We are continuing to press the FBI for information about how it plans to counteract the contagion of white supremacist infiltration of law enforcement bodies," Raskin said after learning of the new FBI report. "The FBI must answer specifically for what it is doing to combat white supremacist infiltration of law enforcement. It must work to root out officers who seek state power to terrorize our communities under color of law."

As German wrote in the Brennan Center report:

The failure of federal, state, and local law enforcement agencies to aggressively respond to evidence of explicit racism among police officers undermines public confidence in fair and impartial law enforcement. Worse, it signals to white supremacists and far-right militants that their illegal acts enjoy government approval and authorization, making them all the more brazen and dangerous. Winning back public trust requires transparent and equal enforcement of the law, effective oversight, and public accountability that prioritizes targeted communities' interests.