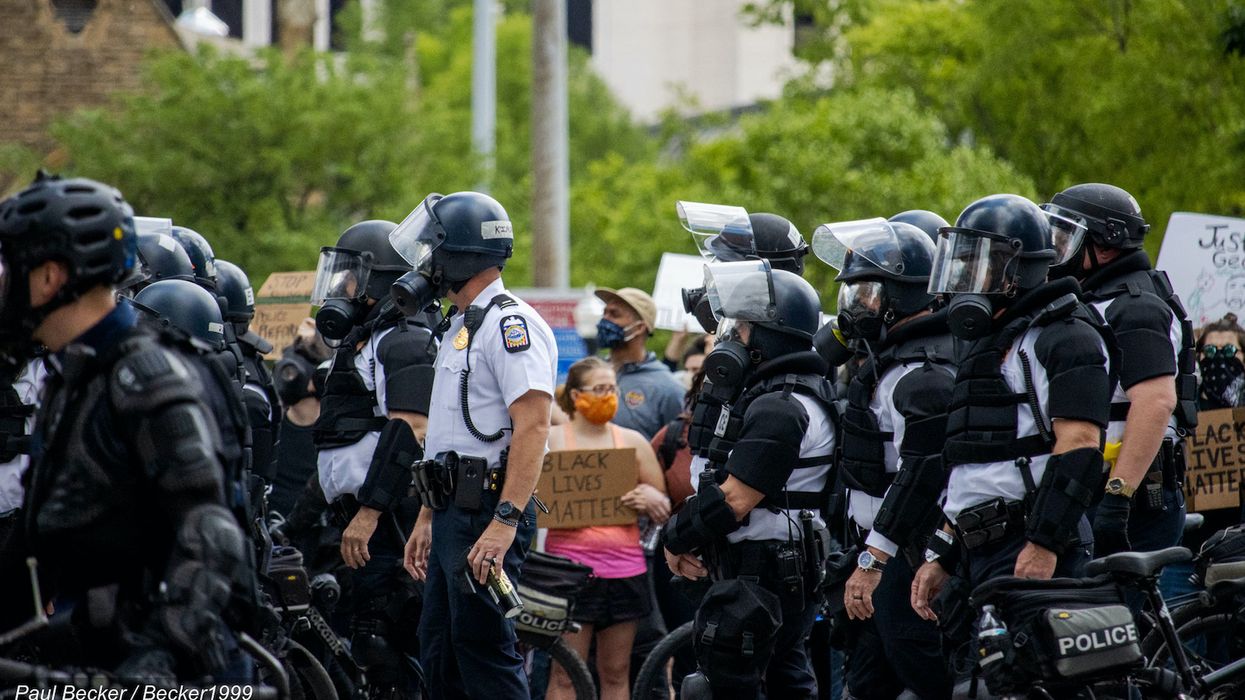 My columns this week have been a variation on a theme of violence and the 20-year militarization of civil society and police services. I have implicated the Republicans, from President George W. Bush allowing the assault weapons ban to expire in 2004 to Mitch McConnell sabotaging the democratic process, both conspiring to result in our current era of blood, trauma and death. Today, I'm going to implicate the Democrats.

Specifically, Democrats on the state and local level. National Republicans have worked hard over two decades to militarize cop shops across the country—via the sale of surplus military equipment and armaments, or courts siding with police officers, shielding them legally. They have done this, because the national Republicans believe militarized violence is the appropriate response to the problems of a free republic.

No Democrat believes that, but those at the state and local levels have enabled the national Republicans by looking the other way. Specifically, I'm talking about city governments under Democratic control. Most cities in this country are run by Democratic mayors or have governing bodies dominated by Democrats. Yet virtually none of them has managed to control militarized police departments that are out of control. They fail not because they can't succeed. They fail because they won't.

The predicament is bigger than most realize. It isn't only about racism and injustice, though those are obviously the primary focal points. It's one of freedom and democracy—not just for people like George Floyd, who was murdered last spring by a white Minneapolis police officer. It's a predicament of freedom and democracy for everyone. In a very real sense, the Minneapolis police department forces the city's government to extract wealth from residents to pay for the crimes of individual police officers. In a very real sense, the militarized police demand residents pay ransom.

Consider the pattern. Cop kills Black person. Black person's family seeks justice in two ways. First, criminal. Second, civil. Because cops are rarely prosecuted, families usually settle for civil damages.1 Cities don't have the money upfront, so they sell municipal bonds. Bonds are bought by Wall Street bankers. Bankers expect profit. Cities must raise revenues—that is, taxes—not only to pay for civil damages caused by criminal police officers, but pay the bankers who are profiting from the damage they caused. You might complain, but that might incur the wrath of police unions, who then threaten to stop enforcing the law if you don't permit them free reign to do whatever they want.

Another pattern. We saw it last spring during demonstrations protesting Floyd's murder. Crowds gather peaceably. Cops instigate reactions from crowds.2 Reactions trigger police responses. Police responses result in arrest, injury or worse. They result in wholesale violations of constitutional rights and liberties. According to a survey of after-action reports published by the Times Sunday, police responses were uniform across the country. "In city after city, the reports are a damning indictment of police forces that were poorly trained, heavily militarized and stunningly unprepared for the possibility that large numbers of people would surge into the streets, moved by the graphic images of Mr. Floyd's death under a police officer's knee," the Times reported.

Cops made things worse because they were militarized. They treated peaceful crowds like violent mobs, according to the Times. Their helmets, body armor and weaponry made them look "as if they were on the front lines of a war." Police acted like it. They had "warrior" attitudes that more often than not escalated conflict. They used non-lethal weapons indiscriminately, such as pepper-spray, tear gas and "foam projectiles." The rights to assembly and association are enshrined in the US Constitution, yet police officers in cities nationwide turned those rights into crimes looking for punishment.

The Times report confirms this is a national predicament. The president promised during his campaign to demilitarize cop shops. But police are local matters, first and last. There's only so much Joe Biden can, or should, do. City governments must do their part, for instance, by outlawing pepper-spray, tear gas and other "non-lethal" weapons. Pepper-spray alone costs cities hundreds of thousands, because some cops know they can use it whenever they want to and never face legal accountability.

Democrats at the state and local levels can act, but they won't. They fear police unions, for one thing. They fear white residents, for another. Property owners in predominantly white neighborhoods tend to approve of police while believing police misconduct isn't their problem. (After all, most people brutalized or killed by police are not white.) If white property owners understood that the problem is systemic, as one of freedom and democracy as well as racism and injustice, then perhaps they would not tolerate being forced to pay ransom for services they have a right to.