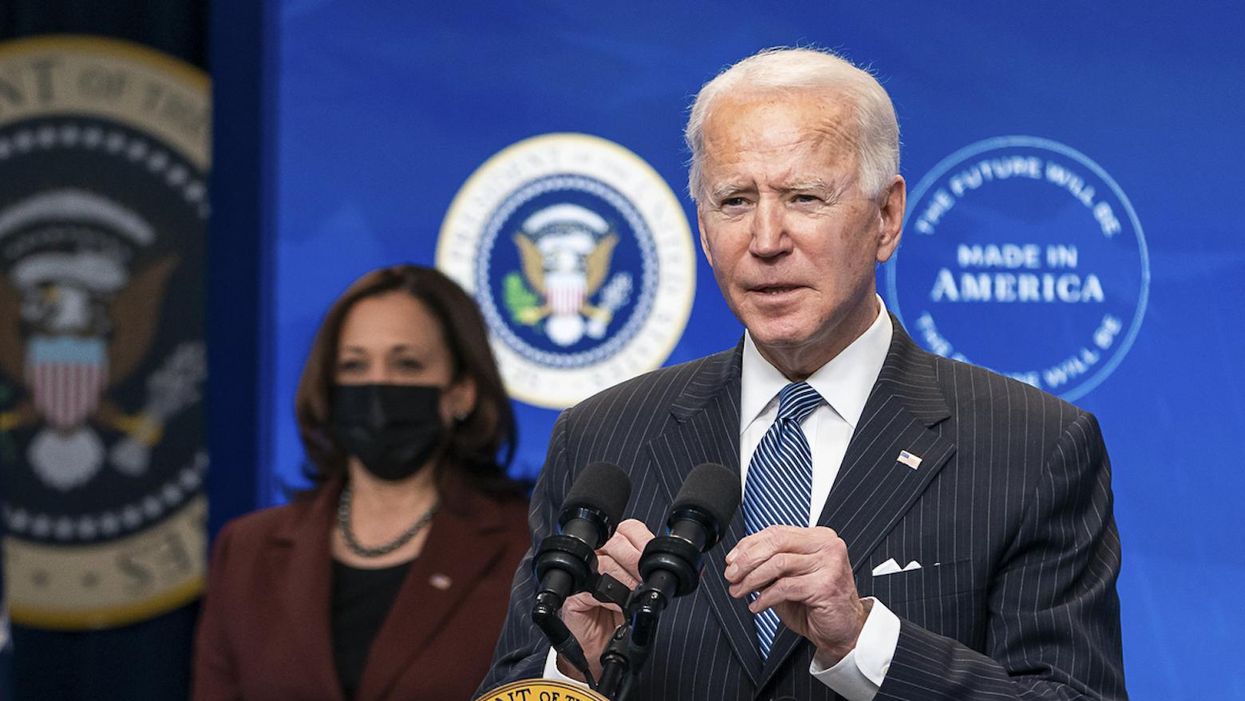 On Wednesday, I said US Senators Joe Manchin and Kyrsten Sinema, perhaps the most conservative Democrats in the United States Congress, didn't have much incentive to support raising the minimum hourly wage from $7.50 to $15. Their states already have minimum rates higher than the federal rate. Whatever incentive they did have pretty much vanished after the Senate parliamentarian ruled the provision for raising the minimum did not meet its requirement for passing legislation by way of "budget reconciliation"—a simple majority rather than a 60-vote supermajority.

This we understand. We also understand that once the parliamentarian announced her ruling, none of the Democrats made a stink or cried out for Kamala Harris to overrule the adjudicator or called on Manchin and others to get the hell out of the way so Joe Biden could live up to his promise or this is me totally lying all of this happened. US Representative Alexandria Ocasio-Cortez was the loudest but not the only voice of dissent: "As a representative of a community that is very deeply impacted by this issue, I know that going back to my family's community in the Bronx and in Queens, we can't tell them that this didn't get done because of an unelected parliamentarian," she said.

You often hear it said by pundits who are impatient with Democratic dithering that they are sick and tired of the Democrats playing by the Republicans' rules. You can count me among that number. I think it's important, however, to pay attention to the results of our incessant complaining. That Ocasio-Cortez and a goodly number of Senate Democrats are making noise about an "unelected parliamentarian"; that they are demanding a change to the "Byrd rule," which is so far preventing a minimum wage provision from being included in the larger $1.9 trillion covid relief package; that they are invoking the vice president's power as the president of the Senate to overrule the adjudicator; that they are calling for zapping the filibuster, which requires a 60-vote supermajority; that all of this is happening suggests the Democrats are no longer playing by the GOP's rules. They are in the process of creating their own rules now that they have the power. Indeed, they seem to have given their last full and final fuck.

I don't typically use salty language in the pages of the Editorial Board. I'm dropping an f-bomb for a reason: to shock us all into recognizing what's going on. It's no accident that while Ocasio-Cortez and the left-most flank of the Democratic Party continue raising hell, the right-most flank of the party, in the person of Manchin and Sinema and others, are not even bothering to see what the Republicans think about the current bill under consideration, the covid relief package. Neither is Joe Biden. In the past, Democratic presidents bent over backwards to give the Republicans something, anything, for the sake of the appearance of bipartisanship. Not this time. It's as if Gerry Connolly, the representative from Virginia, was speaking for the entire party when he said last week in a totally different context: "I didn't vote to overturn an election. And I will not be lectured [about partisanship] by people who did."

Indeed, the sacking of the United States Capitol seems to have been the straw that broke the camel's back. Straws began accumulating after the election of the first Black president. Even the most conservative Democrat in the current Congress might have suspected that the Republicans would mount all-out resistance to Biden the way they did to Barack Obama, but before January 6, it was still possible to give them a small benefit of the doubt. It was still taboo to think of them as untrustworthy traitors. Then came January 6—snap!—the camel's back broke. And there's probably no going back.

Good. As I said Monday, you can't get anything done when fascists sit at the table of democratic politics. Asking the Republicans in either chamber to get involved in the president's legislative agenda is asking them to sabotage it. We can't afford that. The relief bill, though imperfect, must get out the door. Next up is a police reform bill. Then comes a big one, a new voting rights act that would outlaw voter ID laws, among other things. Both have already passed the House. The voting rights bill must pass the Senate in order to counteract movement in the states to suppress voting even more. The Big Lie that Donald Trump was robbed of victory on account of voter fraud is powering legislatures nationally to mount "extraordinary efforts to change the rules of voting and representation—and enhance their political clout," reported the Times.