Did Joe Biden really just get 'lucky' in the 2020 election? 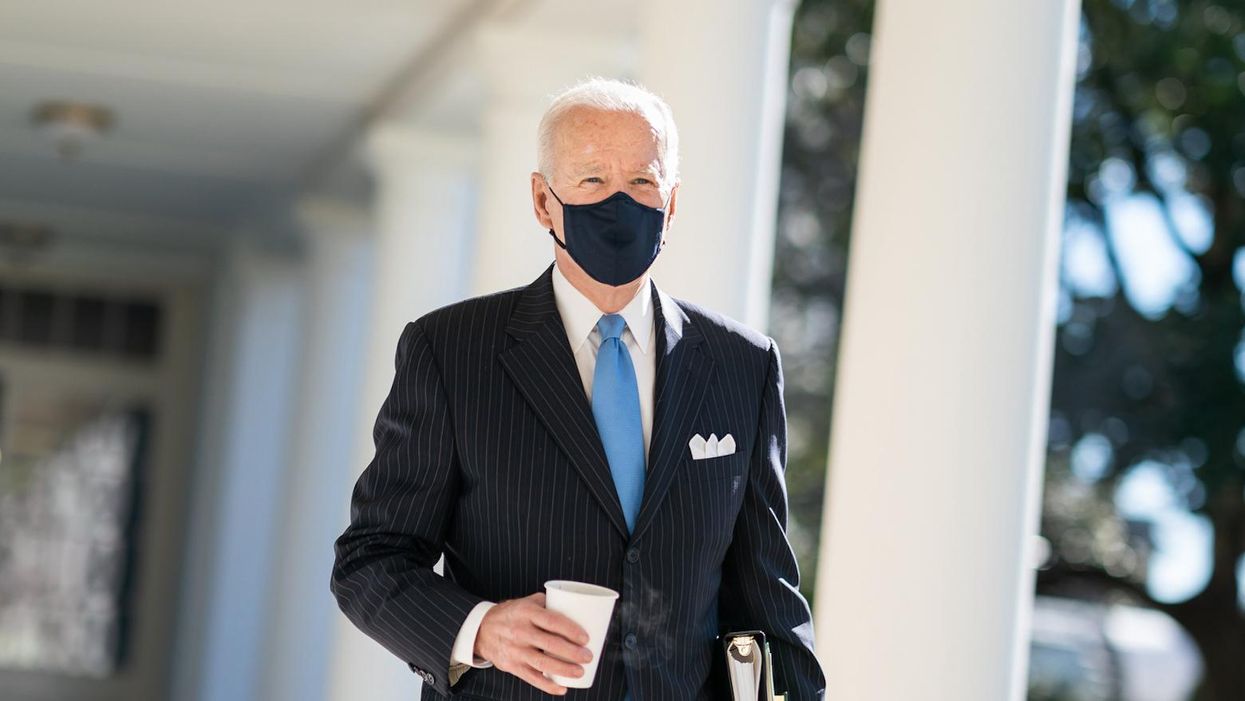 President Joe Biden walks with a cup of coffee Tuesday, March 2, 2021, along the Colonnade of the White House to the Oval Office. (Official White House Photo by Adam Schultz)
Cody Fenwick
March 30, 2021

In their recently published book, journalists Jonathan Allen and Amie Parnes argue that their main takeaway from Joe Biden's win in 2020 is that he got lucky.

Indeed, they choose that word as their title: "Lucky: How Joe Biden Barely Won the Presidency."

Is this really the right way to think about Biden's win? The concept of "luck" is actually surprisingly slippery — someone can be called both lucky and unlucky for the same event. If I get hit by a car while crossing the road but walk away uninjured, you might say I got lucky that it wasn't much worse. But I might fairly say that if I were really lucky, I wouldn't have gotten hit at all.

Allen and Parnes' subtitle gives a clue at what they mean by "lucky." They say Biden "barely" won the presidency, by which they mean he came very close to losing to Donald Trump in 2020. I made a very similar point, but to very different ends, in a piece arguing that American democracy is lurching from crisis to crisis with no clear path out.

Throughout the narrative, Allen and Parnes suggest that at the crucial moments, certain factors had to go just right for Biden to win, and they did. For example, just ahead of the Iowa caucuses, Pete Buttigieg's campaign was able to get a poll spiked on thin grounds that would have shown Biden likely to finish miserably in the state (Buttigieg's performance in the poll was also below expectations.) That fortunate event prevented Biden from going into the caucuses after a news cycle about how he looked surprisingly weak. And then again on the caucus night itself, a technological failure meant the results of the full caucus couldn't be readily ascertained. Suddenly, the national story was about the caucus's technical disaster, not Biden's poor showing in the state. Another lucky break for Biden, according to Allen and Parnes.

They point to other trends being broadly fortunate for Biden as well. The pandemic, they say, exposed Trump's weaknesses and gave Biden an excuse to stay out of the spotlight. Hunkered down in his basement, his approval ratings were able to stay high while the country went to hell on Trump's watch. Initially, too, they suggest that the George Floyd protests put Trump in a negative light — another unpredictable event that went Biden's way.

However, they later argue that the issue of police conduct put Biden in a bind (they don't address how this affects their thesis that he was "lucky.") Trump could hit Biden from both sides — attacking him on not doing enough to stand up for police and against rioters, while also dredging up his history with the 1990s crime bill to paint Biden as too harsh on crime.

The effects of the 2020 summer protests on the election remain hotly debated, and I won't get into most of that here. But I should note that there's not much reason to buy that Trump's attempt to come at Biden from both sides really made much sense. Biden presented himself with a clear, measured, coherent position — he wanted more funding for the police, not less, while enacting significant reforms to prevent abusive conduct from cops. He also repeatedly said he was against any violence in protests. Trump's positioning was much less coherent. He wanted to be the "tough-on-crime" president even while decrying the country as a crime-riddled mess and attacking his opponent as overly punitive of criminals.

Finally, the authors argue that, given that Biden only won the election with a slim cumulative margin of about 50,000 votes in the key swing states, his final victory was his last lucky break.

The narrative overall may seem compelling at first glance. But under scrutiny, it's far less persuasive. While acknowledging, as I have, that the concept of luck is fuzzy, it's more reasonable to describe Biden's position in the 2020 campaign as resilient rather than lucky. Despite significant obstacles in his way, Biden's candidacy was just strong enough on its own merits to succeed.

I don't mean to tell a heroic or hagiographic tale about Biden's victory. But the fact is that from the very start, looking at the 2020 primary polls, and the national head-to-head polls with Trump, Biden looked like the favorite nearly the entire time. You might say he was "lucky," then, in the sense of coming in some sense from a place of advantage privilege. He started with high name recognition and trust because he was Barack Obama's well-liked vice president for eight years, and he was a known quantity in troubled times. But this isn't the sense of "lucky" that Allen and Parnes seem to mean.

They frequently describe Biden's campaign as shambolic and dysfunctional, suggesting that he's lucky he was able to win despite this poor operation. This perspective, though, seems to reflect the preoccupations of campaign reporters more than Biden's objective standing in the race. Whatever flaws we might say Biden's campaign might have had, they don't seem to have affected his ability to win very much, because he succeeded regardless. That's because he entered the race strong due to his standing with public, and his network of formidable allies, and he stayed that way until the end. That wasn't a fluke — that's just who Biden is.

Take the case of the Iowa caucuses, which Allen and Parnes discuss at great length. They suggest Biden was lucky that other incidents distracted from his poor showing in the first contest of the primary. But another way to look at the situation is to say that Biden was unlucky to have the primary start in a state where his support was so minimal, given the fact that he had the largest base of support of all the candidates. That was a structural disadvantage for a campaign that on the merits looked to have most support among the Democratic Party voters — and appeared most likely to win in the general election. Biden was able to survive a poor showing in Iowa, New Hampshire, and Nevada not because he lucked out — but because his national standing was so robust that even with three embarrassing losses, he could still turn it around.

After his initial losses, his polling dropped sharply, and it looked for a spell that Sanders was most likely to win. But it turned out his former voters didn't stray from, and they would soon be back. His apparent weakness at this time was more of a mirage than a veritable shift in the sentiment of the electorate.

Two of his closest opponents, Buttigeg and Amy Klobubchar, dropped out after Biden's definitive win in South Carolina, the primary that marked the start of his resurgence. But Klobuchar and Buttigieg did drop out because Biden got a lucky break — they dropped out because they realized they never had a chance to win. Biden always did, and they were convinced he was the right person to lead the party forward. Again, that's not a fluke — that's what happens when you're a strong candidate in an election.

Once the race came down to just Bernie Sanders and Joe Biden, Biden won handily. He blew Sanders out even in states where he didn't try to compete. And in his one-on-one debate with Sanders, he showed himself to be much more competent than he had appeared in the multi-candidate debates that had occurred early on in the primary, when he consistently struggled. Again, this suggests that Biden was unlucky to face such a large field to start, even though he was able to overcome this disadvantage.

You might argue, as Allen and Parnes did, that it was "lucky" in a narrow sense for Biden's campaign that the coronavirus started dominating the entire world of politics by the spring of 2020, directing the spotlight away from the Democratic nominee. But the truth is that Biden led Trump in the polls in the fall of 2019, often by more than he did in the summer of 2020, so it's hard to say Biden needed the crisis to outshine his opponent.

As we learned, of course, the polls were misleading. Biden's final lead over Trump in the national popular vote was 4.4 points, but the polls had suggested it could easily have been double that. That was, actually, another disadvantage for Biden: the polling gave his side false confidence and a misleading sense of the nature of the race, which makes it difficult to find the right strategy.

Nevertheless, Biden won. And he won despite the fact that the Electoral College was heavily biased in Trump's favor. But once again, it's a little odd to describe this as Biden being lucky — this is Biden winning despite a systematic disadvantage against him. Biden was politically strong enough to win even though circumstances weren't all falling his way.

Allen and Parnes certainly don't try to claim that luck was the only factor in Biden's win — they admit he had to have genuine skill to end up occupying the Oval Office. But these are caveats to their central thesis and the title of their book. As a way of understanding the nature of the 2020 campaign, "Lucky" falls flat. The decision to frame an entire narrative around Biden's ascension as a series of flukes is fundamentally misguided. The American people might have gotten lucky not to end up with a second term of Trump — but Biden appears to have known what he was doing all along.