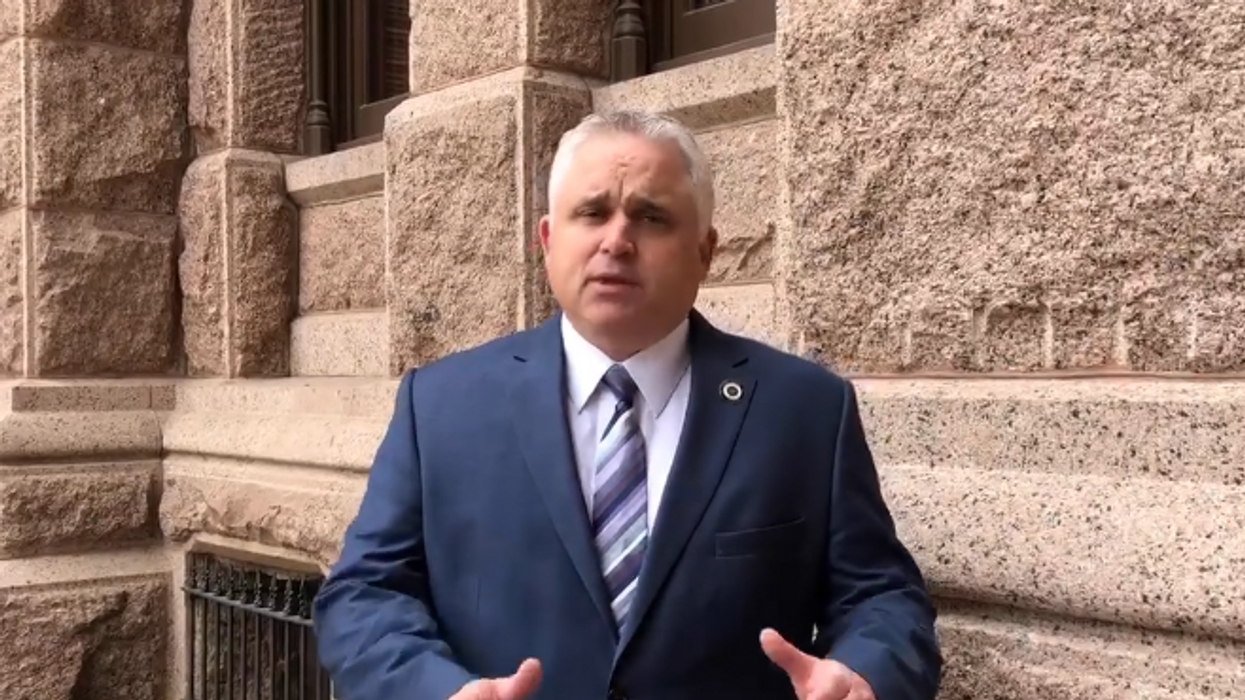 Image via Screengrab.
Shannon Najmabadi
and
The Texas Tribune
March 10, 2021

By Shannon Najmabadi, The Texas Tribune

"Another Texas GOP lawmaker is attempting to make abortion punishable by the death penalty" was first published by The Texas Tribune, a nonprofit, nonpartisan media organization that informs Texans — and engages with them — about public policy, politics, government and statewide issues.

A Texas lawmaker has filed a bill that would abolish and criminalize abortions, leaving women and physicians who perform the procedure to face criminal charges that could carry the death penalty.

The legislation, filed Tuesday by state Rep. Bryan Slaton, does not include exceptions for rape or incest. It does exempt ectopic pregnancies that seriously threaten the life of the woman “when a reasonable alternative to save the lives of both the mother and the unborn child is unavailable."

“It is time for Texas to protect the natural right to life for the tiniest and most innocent Texans, and this bill does just that," Slaton said. “It's time Republicans make it clear that we actually think abortion is murder. … Unborn children are dying at a faster rate in Texas than COVID patients, but Texas isn't taking the abortion crisis seriously."

Similar measures have in the past been filed by state Rep. Tony Tinderholt, R-Arlington, who received death threats and was placed under the protection of the Texas Department of Public Safety after he introduced the bill in 2017. The legislation did not receive a hearing.

In 2019, a related bill from Tinderholt drew nearly eight hours of public testimony. State Rep. Jeff Leach, R-Plano, faced “security concerns" that year after he said the bill would not move out of the committee he chaired for a vote of the full House. The bill died in the committee.

Under the bill filed Tuesday, women who receive an abortion and physicians who perform the procedure could be charged with assault or homicide, which is punishable by death in Texas, confirmed Shannon Edmonds, a staff attorney with the Texas District and County Attorneys Association. The association does not have a position on the bill.

The bill could require people to give evidence or testify about offenses involving the death of or “bodily injury to an unborn child," and would offer immunity to those who do.

It also instructs the state attorney general to monitor and to “direct a state agency to enforce those laws, regardless of any contrary federal statute, regulation, treaty, order or court decision."

The bill bans abortions starting at fertilization; most abortions in Texas are currently prohibited after 20 weeks. The bill's language cites one justice's opinion in a recent Supreme Court case, June Medical Services L.L.C. v. Russo, that says the Constitution "does not constrain the states' ability to regulate or even prohibit abortion."

Slaton, a freshman Republican from Royse City, previously tried to stop the House from naming bridges or streets without first voting to abolish abortion. The amendment failed, but was supported by more than 40 lawmakers, about half of the Republicans in the House.

Asked about the bill's language and effect, Slaton said, without further explanation, that he does not think his bill would "put a single person in jail. All my bill does, is say that an unborn child is the same as a born child and should be treated the same by the laws."

Lt. Gov. Dan Patrick has identified two abortion bills that will be priority items during the legislative session that started in January. One would ban nearly all abortions if the Supreme Court overturned the Roe v. Wade decision or otherwise altered abortion laws. The other has not been filed, but is expected to be a “heartbeat bill" that could bar abortions before many women know they are pregnant.

This article originally appeared in The Texas Tribune at https://www.texastribune.org/2021/03/09/texas-legislature-abortion-criminalize-death-penalty/.