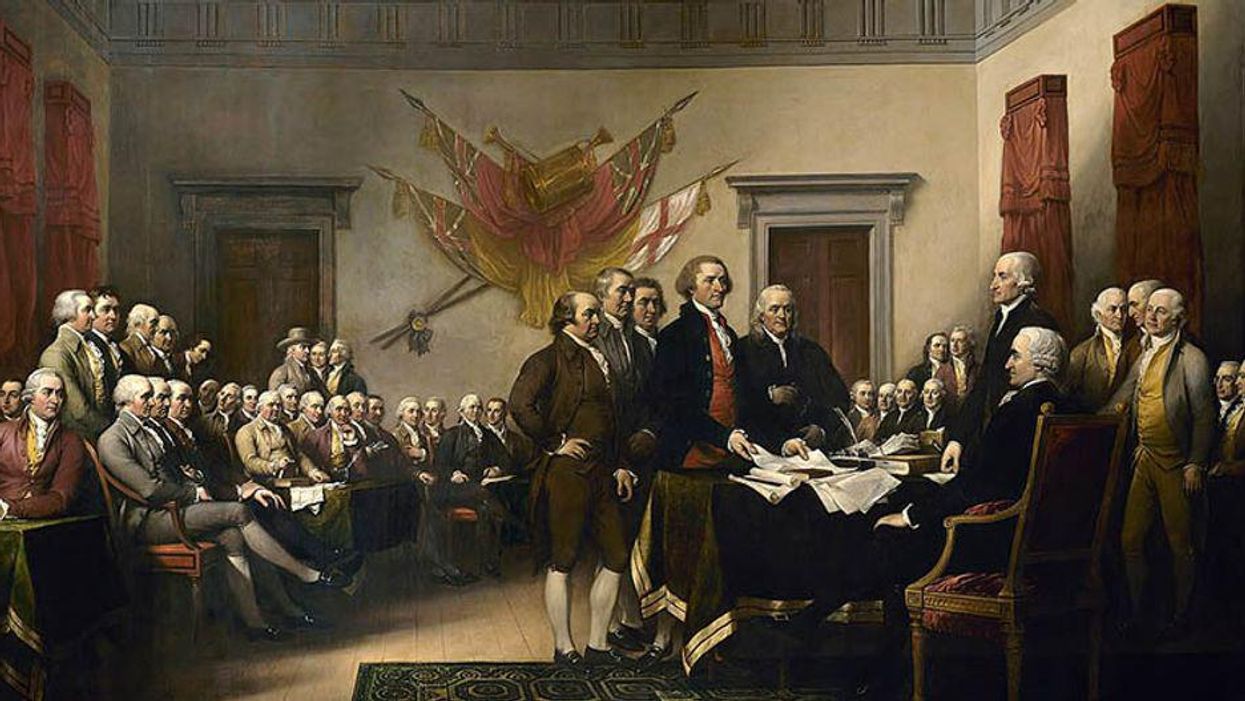 Here's what the feud and reconciliation between John Adams and ...
www.alternet.org
Mia Brett
March 27, 2021

According to the Mass Shooting Tracker, there have already been 124 mass shootings in the United States in 2021. Most mass shootings are domestic violence incidents that never make the news. Unfortunately, the past two weeks have seen two tragic public mass shootings. Last week eight people, including six Asian women, were shot in Atlanta and this week a man killed 10 people in a grocery store in Boulder, Colorado.

A week before the shooting in Boulder, a judge ruled that Boulder could not enforce its citywide ban on assault rifles that would have included the rifle used in the deadly shooting. An AR-15 style rifle was also used in the Las Vegas shooting, the Tree of Life shooting, Sandy Hook, Parkland, the Orlando nightclub shooting and more.

The judge's ruling in Boulder is particularly upsetting when you consider that 82 percent of mass shootings are committed using legally obtained weapons. Additionally, evidence shows that cities and states with stronger gun-control laws have fewer mass shootings and that the 1994 assault weapons ban curbed mass shootings as well as the number of deaths that occurred in mass shootings.

In reality, gun regulations were common among the British colonies before the American Revolution and well after the ratification of the US Constitution and Bill of Rights.

It is clear that the best defense we have against mass shootings and gun violence are gun control measures. Despite the fact that commonsense gun reform has wide support among Americans, the National Rifle Association is still able to block a lot of gun reform measures through lobbying and propaganda. One of their most successful media narratives has been to ahistorically change the purpose and meaning of the Second Amendment. We have hundreds of years of gun regulations and plain text readings of the Second Amendment, a "well-regulated militia," to support reasonable gun control. But the NRA has been so successful that many on both sides of the aisle believe the Second Amendment makes many gun regulations unconstitutional.

In reality, gun regulations were common among the British colonies before the American Revolution and well after the ratification of the US Constitution and Bill of Rights. Unsurprisingly, the first firearm regulations in the British colonies were racist and meant to keep guns out of the hands of Indigenous people. In 1619, the Virginia General Assembly passed a law that allowed colonists to be put to death if they provided Indigenous people with "any piece, shot, or powder, or any other arms offensive or defensive." It was also common for colonies, and later states, to pass laws that made it illegal for enslaved Black people to own guns for fear of slave rebellions.

Most North American colonies continued the common law tradition of restricting traveling with firearms, or as we might call it, "open carry." It wasn't until an 1846 case, Nunn v. State, in Georgia that the "open carrying" of weapons was a protected right, but not the concealed carrying of weapons. While this case has been used as important precedent for contemporary gun rights, there is important context in the antebellum Southern concern over policing enslaved people and their possible rebellions. The case was a stark example of expanding gun rights to uphold slavery.

There were also gun regulations for practical safety concerns around the storage of firearms. Many states stipulated how gunpowder could be stored and transported as well as how much a person could own or possess. Cities like Boston also prohibited storing loaded guns in your home. Instead, guns had to be stored safely and unloaded. Some states passed laws about where a person could shoot a gun in order to protect population centers. Additionally, gun registration was a common part of gun ownership. Many states required that you register your weapon with the local militia.

During the American Revolution, there were gun regulations that many today would find extreme. Several states passed laws requiring people take loyalty oaths or risk confiscation of their weapons. Many were concerned with those still loyal to Great Britain posing an armed threat to the Continental Army and its cause. Even after the Revolution, states had provisions for disarmament of threatening citizens. After Shay's Rebellion, the Massachusetts governor offered pardons to those who participated but only if they swore an allegiance oath and offered their arms to the state.

One of the most controversial discussions about the Second Amendment is if its language guarantees an individual right to own a gun or if it only guarantees the right to those who are part of a militia group. It wasn't until 2008 that the Supreme Court ruled that Americans did have an individual right in District of Columbia v. Heller. However, even in this win for gun rights advocates, the court still acknowledged the right was not unlimited. In his majority opinion Justice Scalia emphasized the decision should not be used to cast doubt on longstanding gun regulations like concealed weapons bans or laws restricting those with felony convictions from owning a gun.

We have a long fight to pass reasonable gun control measures in this country like universal background checks, red flag laws, and assault weapons bans. But we should remember that the founders probably would have supported many of these laws.