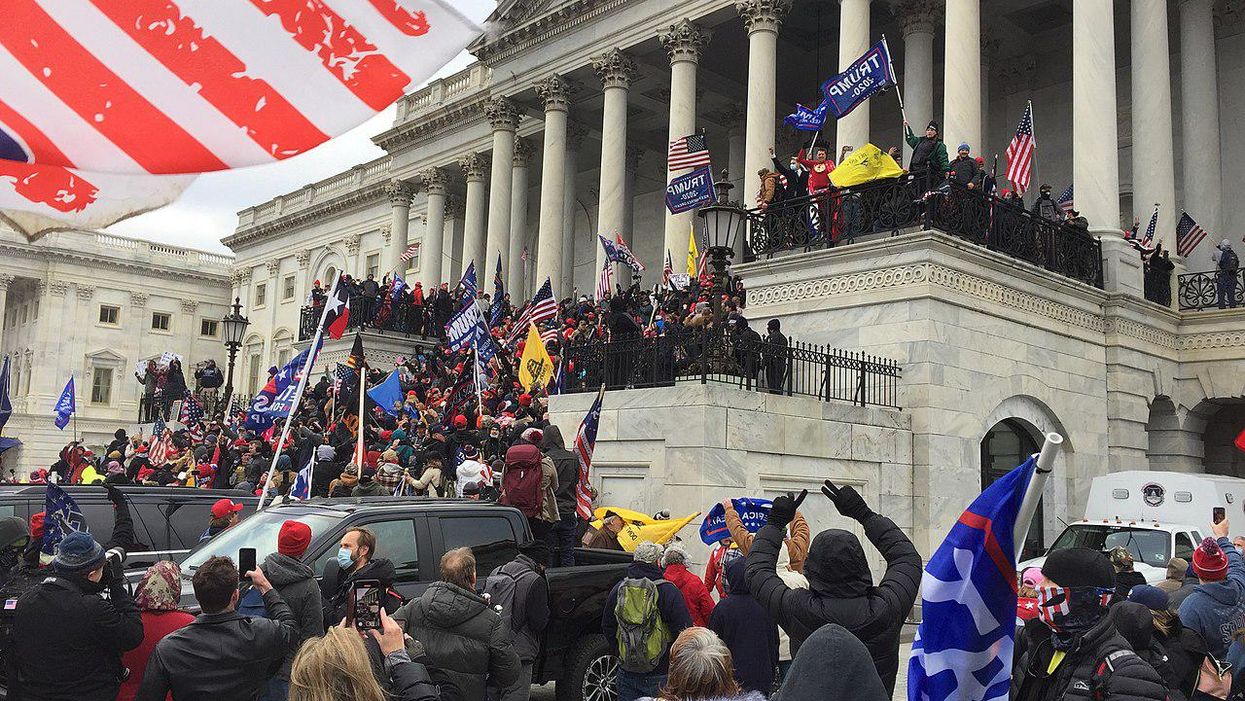 A new political spending analysis released Wednesday shows that former President Donald Trump's 2020 campaign and its joint fundraising committees paid more than $3.5 million to the individuals and firms involved in organizing the January 6 "Stop the Steal" rally that presaged the deadly attack on the U.S. Capitol.

The findings come in the midst of the Senate impeachment trial that will determine whether or not Trump will be convicted for inciting the violent insurrection carried out by a mob of his supporters.

Anna Massoglia, one of the campaign finance researchers who unearthed more than $3.5 million in direct payments from the then-president's political operation to the January 6 organizers, wrote that there are "unanswered questions about the full extent of [Trump's] ties" to the incendiary demonstration that preceded the pro-Trump mob's invasion of the halls of Congress.

"Recent FEC filings show at least three individuals listed on permit records for the Washington, D.C. demonstration were on the Trump campaign's payroll through November 30, 2020," Massoglia noted. "The Trump campaign paid Event Strategies Inc., a firm named in a permit for the rally that also employed two individuals involved in the demonstration, as recently as December 15, just three weeks before the attacks on the U.S. Capitol."

And yet, "because the campaign used an opaque payment scheme that concealed details of hundreds of millions of dollars in spending by routing payments through shell companies where the ultimate payee is hidden," Massoglia wrote, "the American public may never know the full extent of the Trump campaign's payments to organizers involved in the protests."

The permit for the so-called "Save America Rally," hosted by a pro-Trump nonprofit group called Women for America First, "did not explicitly allow for a march from the rally location, which was near the White House to the Capitol," Truthout reported Wednesday. "But it does say that 'some participants may leave to attend rallies at the United States Capitol.'"

Despite their attempts "to distance themselves from the rally," the Associated Press reported last month that members of the Trump campaign "played key roles in orchestrating the Washington rally that spawned a deadly assault on the U.S. Capitol... undercutting claims the event was the brainchild of the president's grassroots supporters."

In a statement shared with AP, Trump's failed reelection campaign claimed that it "did not organize, operate, or finance the event," and that if any former employees or independent contractors participated, "they did not do so at the direction of the Trump campaign."

The AP's review of records, however, found evidence to the contrary. Megan Powers, whose LinkedIn profile said she was still the Trump campaign's director of operations into January 2021, "was listed as one of the two operations managers for the January 6 event." And "at least three of the Trump campaign aides named on the permit rushed to obscure their connections to the demonstration."

According to Massoglia, demonstrating the full extent of the Trump campaign's involvement in the conspiratorial demonstration that preceded the deadly attack on the Capitol is made more difficult by "the rise of shell companies and politically active nonprofits channeling money from untraceable sources."

Trump's 2020 campaign and joint fundraising committee, the Trump Make America Great Again Committee, spent more than $771 million through American Made Media Consultants LLC, according to new data analyzed by OpenSecrets. The secretive limited-liability company was created by campaign aides and members of Trump's inner circle to act as a "clearinghouse" to pay vendors, concealing the campaign's transactions with those vendors.
The FEC generally does not require campaigns to detail payments vendors make to subcontractors so long as the campaign does not have undue influence over the vendor and the subcontractor does not work under the direction or control of the campaign. But the role individuals in Trump's inner circle played in creating the limited-liability company through which the campaign routed millions of dollars raises the question of whether the company is truly separate from the campaign. The former president's son-in-law and White House advisor, Jared Kushner, reportedly helped create the limited-liability company and his daughter-in-law, Lara Trump, reportedly sat on its board.

The nonpartisan Campaign Legal Center filed an FEC complaint alleging that the Trump campaign and its joint fundraising committee may have violated federal election reporting rules by "laundering" those funds and concealing details of the campaign's financial dealings...
The role of nonprofit "dark money" groups that do not disclose their donors in organizing the demonstrations on January 6 only adds to the opacity.

"Politically active nonprofits are only required to report limited information about their financial dealings in tax filings more than a year after activities take place—and may be able to keep their funders secret forever," Massoglia added. "The lack of transparency required of such groups means many details of who they pay and who bankrolls their activities can remain hidden."

Despite those limitations, the recent findings by OpenSecrets of explicit financial connections between the Trump campaign and the organizers of the January 6 rally that culminated in a coup attempt corroborate the case for Trump's conviction being made by the House impeachment managers.

As the House Democrats have shown, Trump told his followers for months that "their victory was stolen, the election was rigged," and then as Congress prepared to certify President Joe Biden's victory on January 6, Trump told a well-armed crowd "their patriotic duty was to fight to stop the steal," as Rep. Eric Swalwell (D-Calif.) said.

The political spending data unearthed by OpenSecrets further substantiates, as Truthout noted, the arguments of Rep. Jamie Raskin (D-Md.), Rep. Joe Neguse (D-Colo.), Del. Stacey Plaskett (D-Virgin Islands), and others that "many of the events surrounding the attack on the Capitol were premeditated, and that Trump and his team knew this and egged it on."

Regarding the FEC, "the sole federal agency tasked with enforcing campaign finance law," Massoglia pointed out that it "was largely powerless throughout the 2020 election cycle" due to a lack of commissioners. "With its quorum restored, the FEC can again vote on enforcement matters addressing a backlog of complaints alleging campaign finance violations."

"The possibility that a failed presidential candidate's campaign may have continued bankrolling operatives behind a rally that escalated to violent insurrection raises the question of how this could have been hidden from the American public," she wrote, "and raises the stakes for campaign finance transparency to a new level."