The monstrous predicament Trump left behind 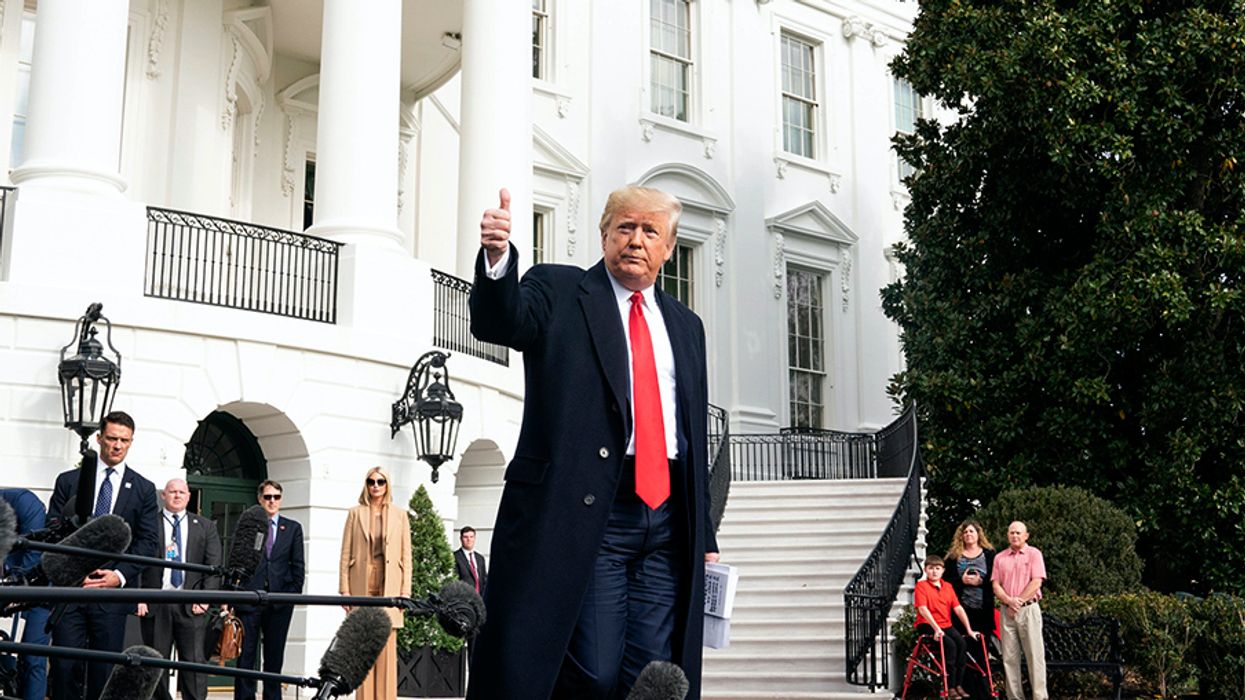 President Donald J. Trump gives a thumbs-up as he walks to board Marine One after speaking to reporters outside the South Portico of the White House Wednesday, Nov. 20, 2019, to begin his trip to Austin, Texas. (Official White House Photo by Joyce N. Boghosian)
Robert Reich
and
RobertReich.org
February 09, 2021

This week's Senate trial is unlikely to convict Donald Trump of inciting sedition against the United States. At least 17 Republican senators are needed for conviction, but only five have signaled they'll go along.

Why won't Republican senators convict him? After all, it's an open and shut case. As summarized in the brief submitted by House impeachment managers, Trump spent months before the election telling his followers that the only way he could lose was through "a dangerous, wide-ranging conspiracy against them that threatened America itself."

Immediately after the election, he lied that he had won by a "landslide," and later urged his followers to stop the counting of electoral ballots by making plans to "fight like hell" and "fight to the death" against this "act of war" perpetrated by "Radical Left Democrats" and the "weak and ineffective RINO section of the Republican Party."

A shocking three out of four Republican voters don't think Joe Biden won legitimately. About 45 percent even support the storming of the Capitol.

The crux of the problem is Americans now occupy two separate worlds – a fact-based pro-democracy world and a Trump-based authoritarian one.

Trump spent the last four years seducing voters into his world, turning the GOP from a political party into a grotesque projection of his pathological narcissism.

Regardless of whether he is convicted, America must now deal with the monstrous predicament he left behind: One of the nation's two major political parties has abandoned reality and democracy.

What to do? Four things.

First, prevent Trump from running for president in 2024. The mere possibility energizes his followers.

An impeachment conviction is not the only way to prevent him. Under Section 3 of the 14th Amendment to the Constitution, anyone who has taken an oath to protect the Constitution is barred from holding public office if they "have engaged in insurrection" against the United States. As constitutional expert and former Yale Law professor Bruce Ackerman has noted, a majority vote that Trump engaged in insurrection against the United States is sufficient to trigger this clause.

Second, give Republicans and independents every incentive to abandon the Trump cult.

White working-class voters without college degrees who now comprise a large portion of it need good jobs and better futures. Many are understandably angry after being left behind in vast enclaves of unemployment and despair. They should not have to depend on Trump's fact-free fanaticism in order to feel visible and respected.

A jobs program on the scale necessary to bring many of them around will be expensive but worth the cost, especially when democracy hangs in the balance.

Big business, which used to have a home in the GOP, will need a third party. Democrats should not try to court them; the Democratic Party should aim to represent the interests of the bottom 90 percent.

Third, disempower the giant media empires that amplified Trump's lies for four years – Facebook, Twitter, and Rupert Murdoch's Fox News and its imitators. The goal is not to "cancel" the political right but to refocus public deliberation on facts, truth, and logic. Democracy cannot thrive where big lies are systematically and repeatedly exploited for commercial gain.

The solution is antitrust enforcement and stricter regulation of social media, accompanied by countervailing financial pressure. Consumers should boycott products advertised on these lie factories and advertisers should shun them. Large tech platforms should lose legal immunity for violence-inciting content. Broadcasters such as Fox News and Newsmax should be liable for knowingly spreading lies (they are now being sued by producers of voting machinery and software which they accused of having been rigged for Biden).

Fourth, safeguard the democratic form of government. This requires barring corporations and the very wealthy from buying off politicians, ending so-called "dark money" political groups that don't disclose their donors, defending the right to vote, and ensuring more citizens are heard, not fewer.

Let's be clear about the real challenge ahead. The major goal is not to convict Trump of inciting insurrection. It is to move a vast swath of America back into a fact-based pro-democracy society and away from the Trump-based authoritarian one.

Regardless of whether he is convicted, the end of his presidency has given the nation a reprieve. Unless America uses it to end Trumpism's hold over tens of millions of Americans, that reprieve may be temporary.