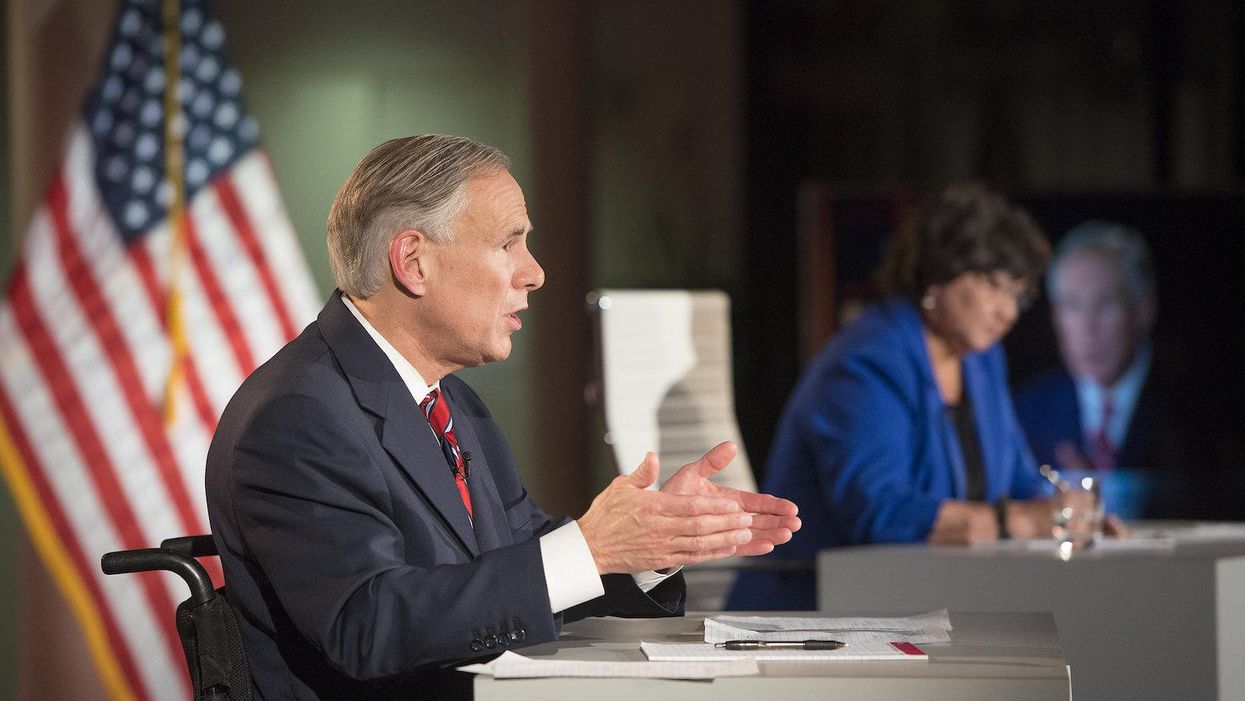 Donald Trump may be gone, having left behind a pandemic that has killed nearly 500,000 Americans, due to his malicious incompetence. Still, his spirit lives on in the Republican Party and its propaganda apparatus, Fox News. It's the spirit of governing the people like you hate them and want them to die. Just take a look at the GOP response to the crisis in Texas, which has been buried under blizzards so bad that "unseasonable" is a comical understatement. The ice and snow has caused the power grid in the state to collapse, leaving millions of Texans without power and heat in deadly conditions. Rather than deal with the problems with maturity and grace, however, Texas's Republican Gov. Greg Abbott and his allies are taking a page directly from Trump's coronavirus response playbook by abandoning people while exploiting the situation to push a far-right, authoritarian agenda that will only make the problems much worse.

Just as Trump's response to the pandemic suggested he was rooting for the coronavirus, Abbott and company are using this natural disaster to fight for a future with more natural disasters.

"This shows how the Green New Deal would be a deadly deal for the United States of America," Abbott sneered on Fox News Tuesday night, blaming "[o]ur wind and our solar" and insisting that it "just shows that fossil fuel is necessary." This is, of course, the opposite of true.

While scientists always hesitate to blame any single bad weather event on climate change, the reality is that its effects are felt in these kinds of extreme weather conditions experienced by Texas and much of the South right now. "But as climate change accelerates, many electric grids will face extreme weather events that go far beyond the historical conditions those systems were designed for, putting them at risk of catastrophic failure," Brad Plumer writes in the New York Times, adding, "unless grid planners start planning for increasingly wild and unpredictable climate conditions, grid failures will happen again and again."

"The infrastructure failures in Texas are quite literally what happens when you *don't* pursue a Green New Deal," Rep. Alexandria Ocasio-Cortez, D.-N.Y., tweeted in response to Abbott, noting that a huge part of the plan is updating the electrical grid so it doesn't have these problems.

But Abbott doesn't want to admit that climate change is real, even as his state gets buried under weather that was unthinkable even a decade ago. Worse, in a very Trumpian style, Abbott's instinct in the face of catastrophe is to do whatever it takes to make things worse. In this case, that means doubling down on the very fossil fuels that are driving the problem of climate change.

And why not? Modern conservatism long ago abandoned any idea of good governance or a coherent ideology. Instead, the guiding principle is trolling liberals. As Trump discovered during the pandemic, when he convinced his followers to reject masks and social distancing, very few things trigger the liberals as reliably as deliberately causing mass death from wholly preventable causes. And as Adam Serwer, staff writer for the Atlantic and Texas resident, said on Twitter: "What's going on in Texas is what happens in a one party state where every single statewide politician has no professional skills beyond stoking culture war bullshit every day so they didn't winterize its generation sources the last time this happened."

Not only is Abbott's trolling response to this crisis only going to make the problem worse, but it's also flat-out lying.

As the Electric Reliability Council of Texas pointed out, frozen turbines were the smallest contributor to the Texas blackout problem. Instead, the problems are largely due to Republican governance and the conservative philosophy of letting government services rot instead of keeping them updated and working. Indeed, it's the natural gas system — one of the fuels Abbott was hyping with his troll-the-liberals approach — that has been the primary source of the blackout problem in Texas.

It's not a surprise Abbott is going about this in the most destructive way possible. Like his role model Trump, Abbott is taking all his cues from Fox News.

"Fox News' answer is to blame the state's reliance on wind energy," report Allison Fisher and Evlondo Cooper of Media Matters, pointing at multiple segments in which the network is exploiting the disaster "to feed fears about clean energy and the Green New Deal that it has long nurtured."

Part of what is feeding this is no doubt money from fossil fuel industries, who handsomely fund the campaigns of Abbott and other Texas Republicans. But Fox News and their right-wing audience that eats this crap up are not really driven as much by oil and gas money. Ultimately, that flavor of anti-environmentalism is pure tribalistic hatred. Reflexively hating anything liberals like is what defines modern conservatism. After all, Texas Lt. Gov. Dan Patrick turned to Fox News to publicly suggest America's elderly sacrifice themselves to save American capitalism in the face of coronavirus shutdowns. So Republicans will let people in their own communities freeze to death rather than admit liberals might be right about this climate change thing.

The sadism undergirding modern conservatism was illuminated by Tim Boyd, the mayor of Colorado City, Texas, who — in perfect troll style — kicked off a Facebook rant on Tuesday by declaring, "Let me hurt some feelings while I have a minute!!"

Boyd then went on to declare that "City and County, along with power providers or any other service owes you NOTHING!" and people who wanted the power turned back on were "lazy" and "looking for a damn hand out!" He recommended that people who want electricity and water stop looking to utility companies and instead "step up and come up with a game plan to keep your family warm and safe" and that people are "capable of doing it themselves!"

He never bothered to explain how ordinary people should generate electricity and water for themselves, of course, but insisted on the justice of his approach by declaring, "Only the strong will survive and the weak will parish[sic]."

Boyd ended up resigning after the public outcry, but really, his rant is merely a blunter version of the general GOP ethos that has, in recent months, morphed into an outright death cul. It's the same mentality fueling those who refuse to wear masks or socially distance, believing that any kind of concern or care for others is weak liberal thinking. That's how ridiculous the American right has become, that they will invite objectively terrible outcomes into their own lives just to own the liberals. You might even say they're freezing off their noses to spite their faces.