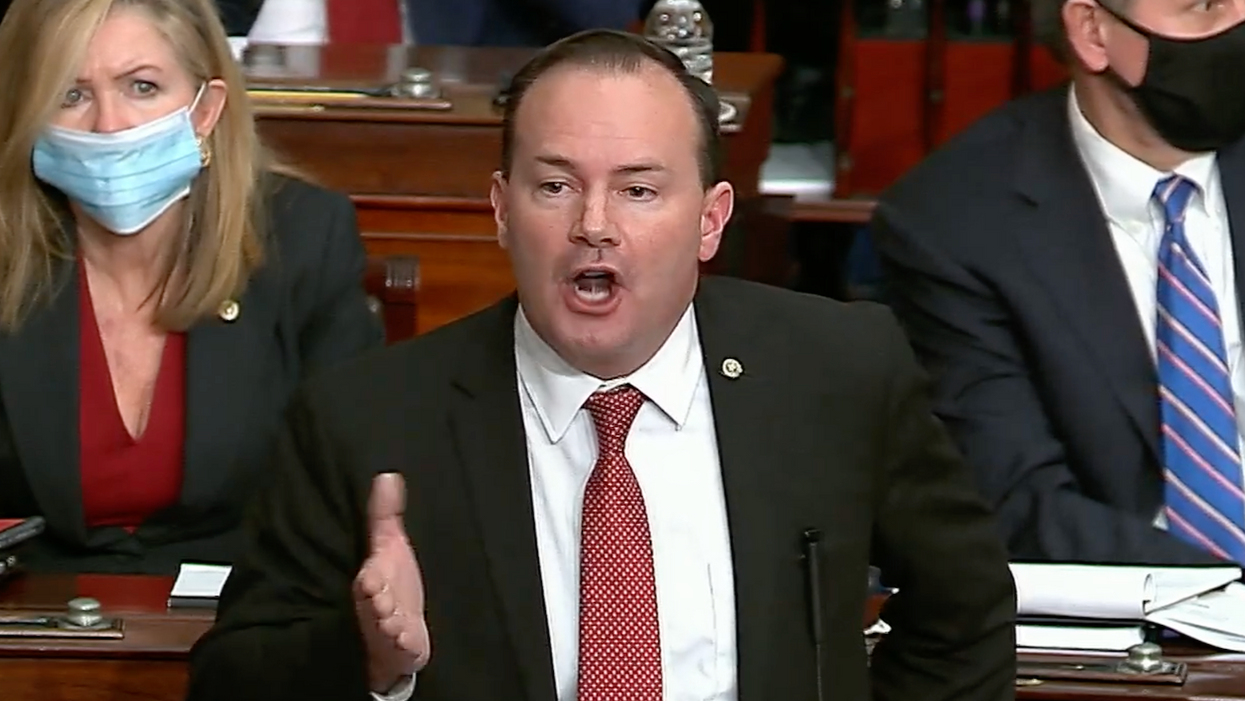 On the second day of former President Trump's impeachment trial, emotions ran high on the Senate floor as lawmakers across both aisles watched aghast at security footage that had never before been seen, revealing just how close the rioters were to breaching the Senate chamber while members of Congress were still inside.

Democrats serving as the House impeachment managers showed clips of Sens. Mitt Romney, R-UT, and Chuck Schumer, D-NY, and former Vice President Mike Pence narrowly escaping the violent mob of marauders as they spread throughout the Capitol building on Jan. 6. Impeachment managers methodically recounted a timeline of the events leading up to the insurrection, citing various instances during the many months prior in which Trump sowed the seeds of violence in his followers.

One of the more expected moments in the trial occurred when House manager Rep. David Cicilline, D-RI, cited a call Trump had mistakenly made to Sen. Mike Lee, R-UT, during the insurrection, thinking that he had, in fact, called Sen. Tommy Tuberville, R-AL. Lee claimed that he'd quickly given the phone to Tuberville, who Trump "reportedly" asked to make additional objections to the election certification process over a 10-minute phone call, during which Lee and Tuberville grew increasingly panicked as the riot unfolded.

"Excuse me, Tommy," Lee said he interjected at the time, "We have to evacuate. Can I have my phone?"

On Wednesday, Lee objected to Cicilline's recounting of the report to say that Trump had asked Tuberville to slow down the certification process, ultimately leading Cicilline to withdraw the statement. The House managers did, however, reserve the right to clarify their point on Thursday.

During and after the trial, many GOP senators were relatively forthright about their emotional state following the second day of the impeachment trial — a tense scene in which, as Sen. Susan Collins, R-ME, described, "you could hear a pin drop."

Sen. Rob Portman, R-OH, expressed that it was "not easy" to watch the footage and admitted he and his colleagues were "not as protected as [they] thought [they] were."

Sen. Romney, one of the six senators who has expressed his support of the trial, said that he felt "very fortunate" for Capitol police officer Eugene Goodman, who rushed him away from the Senate chambers with just minutes to spare. The "violence that our Capitol Police and others were subjected to," Romney said, "tears at your heart and brings tears to your eyes. That was overwhelmingly distressing and emotional."

"I just can't believe that we could lose the Capitol like that," Sen. Lindsey Graham, R-S.C., told reporters, "I got mad. I mean these police officers had every right to use deadly force, they should have used it."

Many GOP senators commended on the clarity of the Democrats' case, a quality strikingly absent from Trump's legal team during the first day of the trial.

Senator Lisa Murkowski, R-AK, who had also advocated for the trial in January, said, "I think that the House managers are making a very strong case for a timeline that laid out very clearly the words that were used, when he used them, how he used to really build the anger, the violence that we saw here in this Capitol."

"I think they've done a good job connecting the dots," Sen. John Thune, R-S.D. told reporters, echoing Murkowski's praise, "The president's Twitter feed is a matter of public record, and they've done, like I said, an effective job of going back several months and just showing that public record."

However, Murkowski and Thune were not joined by most of their Republican colleagues, who remained unconvinced that the former president directly incited the violence that broke out on Capitol Hill.

When asked whether Wednesday's presentation would change his vote, Sen. Mike Braun, R-IA, said during a break, "No, because I've seen, I think, most of it," adding, "I think it's good to review it, but I don't know that that's going to make a difference for any one senator just having it on a loop again."

"They spent a great deal of time focusing on the horrific acts of violence that were played out by the criminals," said Senator Ted Cruz, R-TX, one of the dozen or so Senators who openly backed Trump's effort invalidate the election certification, "But the language from the president doesn't come close to meeting the legal standard for incitement."

Despite the visceral reaction elicited by the new footage Democrats had shown, the lack of any independent investigations or any witness testimony will make it unlikely for the impeachment team to sway more Republicans, solidifying Trump's inevitable acquittal.

In fact, many Republican senators continued to deflect blame to Democrats.

Others made a show of not paying attention to the trial.

Sen. Josh Hawley of Missouri sat up in the gallery reading with his feet up a day after Sen. Rand Paul of Kentucky was seen by reporters — but not cameras, as Senate rules require only the speakers on the dais be shown — doodling what appeared to be a drawing of the Capitol. And Ted Cruz was rage tweeting about a UK hospital's decision to drop terms considered to be trans-exclusionary such as "breast milk."