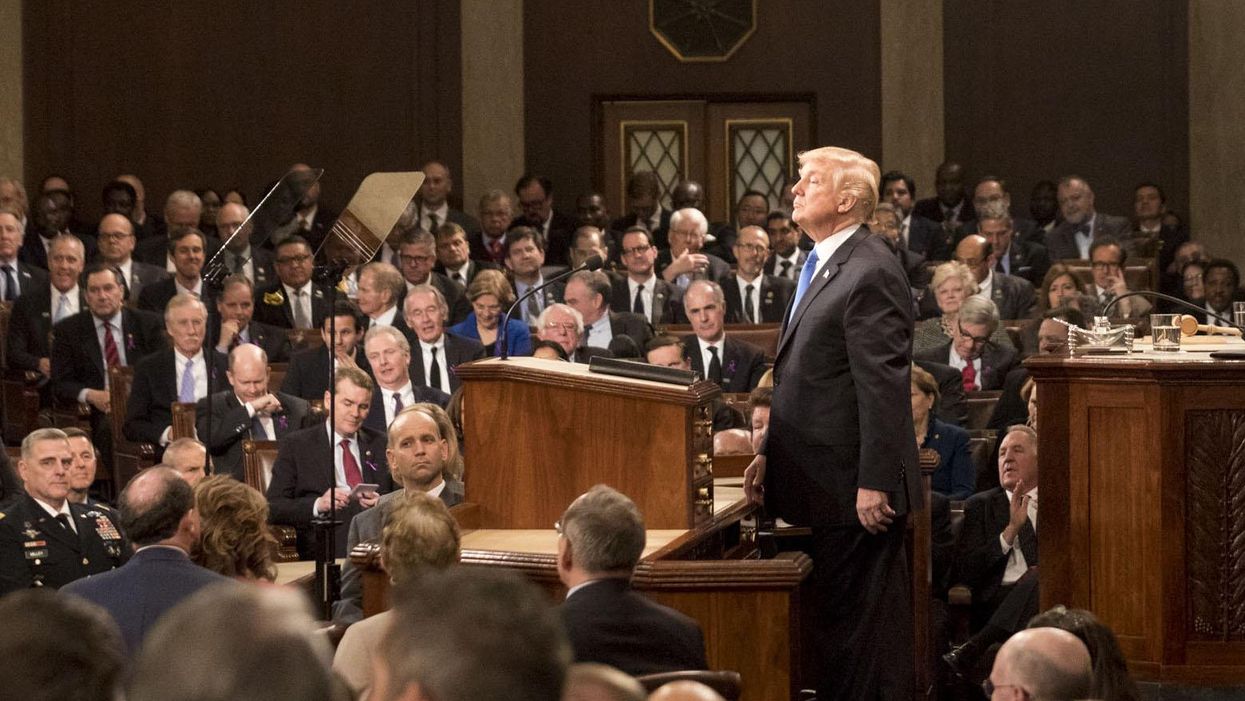 For weeks now, Republicans in Congress have been playing a rhetorical game regarding the impeachment of Donald Trump on charges — for which he is quite obviously guilty — of inciting an insurrection. On one hand, Senate Republicans want very badly to acquit Trump, even though this would allow him to run for office again, believing that the Republican voting base is more loyal to Trump than they are to the GOP or to the nation itself. On the other hand, they don't want to come right out and say that Trump was justified in sending a violent crowd to storm the Capitol on January 6. That sort of overtly fascist stance can hurt one's bookings on cable news shows and cause corporate donors to put you on ice for a cycle.

So Senate Republicans glommed onto what they thought was the perfect strategy to have it both ways: pretend that they are springing Trump on a technicality.

Last week, in a vote called by Sen. Rand Paul of Kentucky, 45 out of 50 Senate Republicans voted affirmatively on the claim that it's unconstitutional to hold an impeachment trial for Trump now that he's out of office. "Impeachment is for removal from office, and the accused here has already left office," Paul argued, clearly imagining himself a true artiste of hair-splitting.

Senate Republicans want to maintain a position as Schrödinger's insurrectionists, neither for or against Trump's attempted coup. But Trump was never a man with a taste for the politically useful equivocacy and has special loathing for Republicans who aren't enthusiastic enough about the terrible and illegal things he likes to do. So it's unsurprising that Trump looks like he's going to make life very difficult for Senate Republicans by leaning away from the technicality arguments and pushing for his lawyers to simply defend his actions in attempting to overthrow the legally elected government.

"According to both the New York Times and the Washington Post, Trump insisted that his lawyers mount a defense focusing on 'his baseless claims about election fraud,'" Heather "Digby" Parton explained Monday morning at Salon. The result is Trump's legal team, afraid of repercussions for lying during trial arguments, has decided to quit his case. Trump's now scraped the bottom of the barrel for new lawyers at the eleventh hour.

All of this means that rather than playing along with the acquit-on-a-made-up-technicality strategy handed to him by Senate Republicans, Trump is likely to run a defense based on the premise that he did nothing wrong by sending a mob to the Capitol in an effort to overturn the election. This puts Senate Republicans in a bind by making it hard to maintain the illusion that they're not endorsing the insurrection while letting Trump off the hook for inciting it.

It's worth remembering that we've been down this road before. In Trump's last impeachment trial, Republicans in the Senate and conservative legal experts both generally felt that the smartest defense was to argue that Trump was wrong to run an extortion scheme against the president of Ukraine, but that it fell short of being an impeachable offense. Trump, however, was attached to the "Trump can do no wrong/Trump is perfect in every way" defense. And that's what he eventually got, as Alan Dershowitz, always ready to be maximally shameless, advanced the claim that anything Trump wants to do to get re-elected should be rendered legal by the grace of Trump's indubitable wisdom as president.

Trump bet during that impeachment that, given a choice between kissing his ass in public and maintaining a sense of dignity, Senate Republicans would all line up behind him, lips a-puckered. It's a bet that paid off. In the end, Trump got all Senate Republicans, except for Sen. Mitt Romney of Utah, to vote to acquit him on the strength of the "Trump can do no wrong" defense.

It's laughable, however, that Republicans in the Senate ever thought there was going to be a way to acquit Trump this time around with their dignity intact. They were always going to have to sign onto his ridiculous claims that the election was stolen from him and to back his use of violence to try to get his way. There have only ever been two options for Republicans: Cut Trump loose or completely subjugate themselves to his massive ego. There is no middle ground.

Even before Trump made this move, it should have been clear to Republicans that impeachment would come down to the stark question of whether they are for or against an authoritarian uprising against democracy. While some Beltway journalists might be snookered by political hedging on this question, voters generally aren't going to be too interested in the fine distinction between "supporting a fascist coup" and "merely opposing consequences for the ringleader of a fascist coup."

Whether Senate Republicans want to admit it or not, the reason Trump has them clutched in his stubby fingers is that most of their voters support Trump's efforts to overturn the election.

The entire reason Republicans in Congress won't convict Trump, even though they know he's guilty, is fear of offending their pro-insurrection base. Whatever excuses they make are frankly beside the point. Republican leadership is complicit with Trump's attempted coup. The only way to not be complicit any longer is to vote to convict Trump.