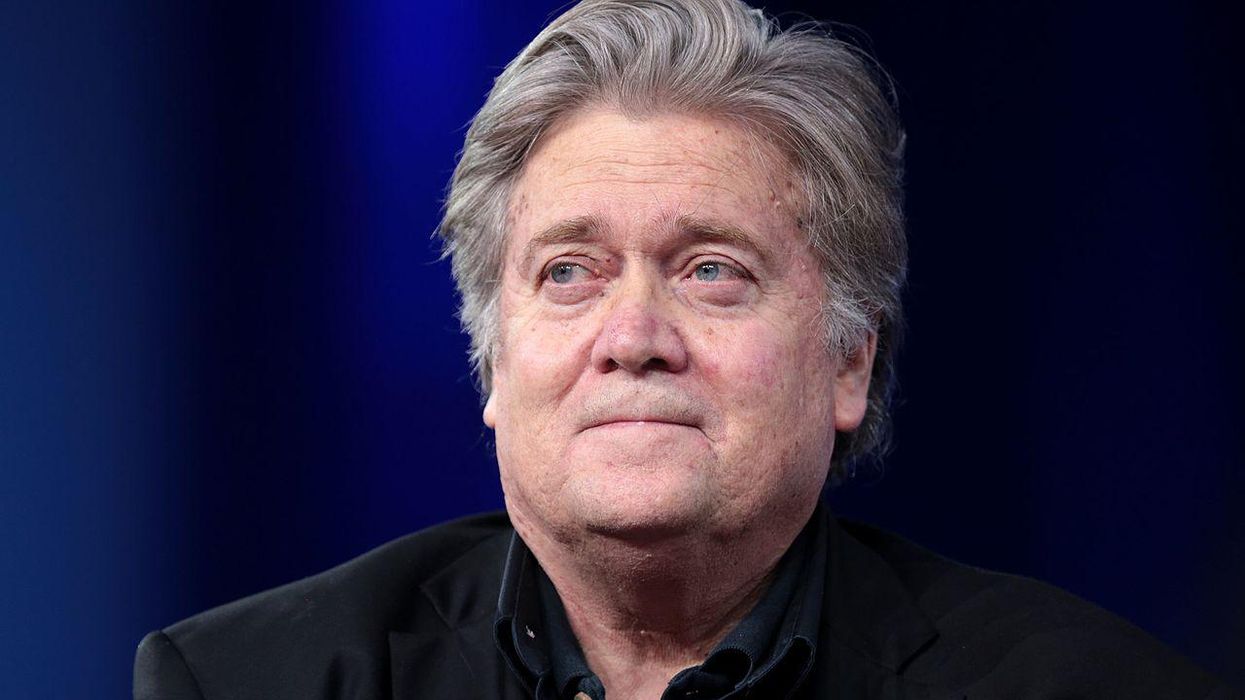 Four years ago, Steve Bannon was the face of Trumpism when he was serving as then-President Donald Trump's White House chief strategist — and although Trump is no longer president, the far-right Bannon is still declaring war on non-Trumpist conservatives. Liberal Washington Post opinion writer Greg Sargent analyzes some of Bannon's recent activities in his column this week, stressing that Bannon hasn't become any less extreme.

"Trump's former adviser is now elevating his profile as spokesman for the pro-Trump wing in a way that usefully illuminates the ugly depths of the GOP's ongoing radicalization," Sargent observes. "But the contours of this radicalization also impose an obligation on Democrats — to ensure that nothing impairs a full accounting into Trump's most recent crime against the country: the effort to incite the violent overthrow of U.S. democracy."

According to Sargent, Bannon has "entered the fray on two fronts": a "GOP civil war" in Pennsylvania and "a looney plot to impeach" President Joe Biden.

During Trump's second impeachment trial, Sen. Pat Toomey of Pennsylvania infuriated Trump loyalists when he voted that the former president was guilty of "incitement to insurrection." Toomey doesn't have to worry about facing a GOP primary challenge in Pennsylvania's 2022 U.S. Senate race, as he has officially announced that he won't be seeking reelection. But Sargent notes that even without Toomey, Bannon wants to make that primary a referendum on the senator's impeachment vote.

"As Politico reports, Toomey's vote against Trump is now the central issue in that primary, which is becoming a proxy battle between Republicans still loyal to Trump and those who think continued devotion to him will damage the party's statewide chances," Sargent notes. "Bannon has moved to put his stamp on the contest."

Bannon told Politico, "Any candidate who wants to win in Pennsylvania in 2022 must be full Trump MAGA." And Sargent explains what "full Trump MAGA" means in Pennsylvania, writing, "It means absolute devotion to the mythology that Trump should not have been held accountable for his effort to incite the violent disruption of the election that was stolen from him."

"The rage of the MAGA forces are pouring down on former (Pennsylvania) Congressman Ryan Costello, who is mulling a run for Senate and who suggested it's a bad idea for county parties to censure Toomey for his vote to convict Trump, as some have already done," Sargent observes. "Costello says the censures 'will hurt Republican candidates.' For this, Bannon scaldingly denounced Costello as 'a sellout to the globalists.' The grand populist nationalist vision that once animated Trumpism has been reduced to little more than a demand for unwavering lickspittlery to Trump despite — or perhaps because of — his effort to incite violent insurrection."

Sargent goes on to say that Bannon's "second threat is even more comically absurd."

The columnist explains, "(Bannon) recently told a Boston audience that he hopes to see Trump run for Congress in 2022, then run for speaker of the House — which Bannon presumes Republicans will win — then preside over the impeachment of President Biden…. This is rank crackpottery, but here again, the singular organizing and motivating principle is the idea that Trump's loss to Biden couldn't possibly have been legitimate, or that there's simply zero obligation on the part of the Trump movement to recognize it as such — and that loyalty to Trump requires unwavering fealty to that idea."

"This radicalization of the GOP against democracy could have a major impact on our political future," Sargent writes. "All of this, I think, imposes an obligation on us to ensure that what happened on Jan. 6 is not memory-holed and gets the full accounting it deserves."