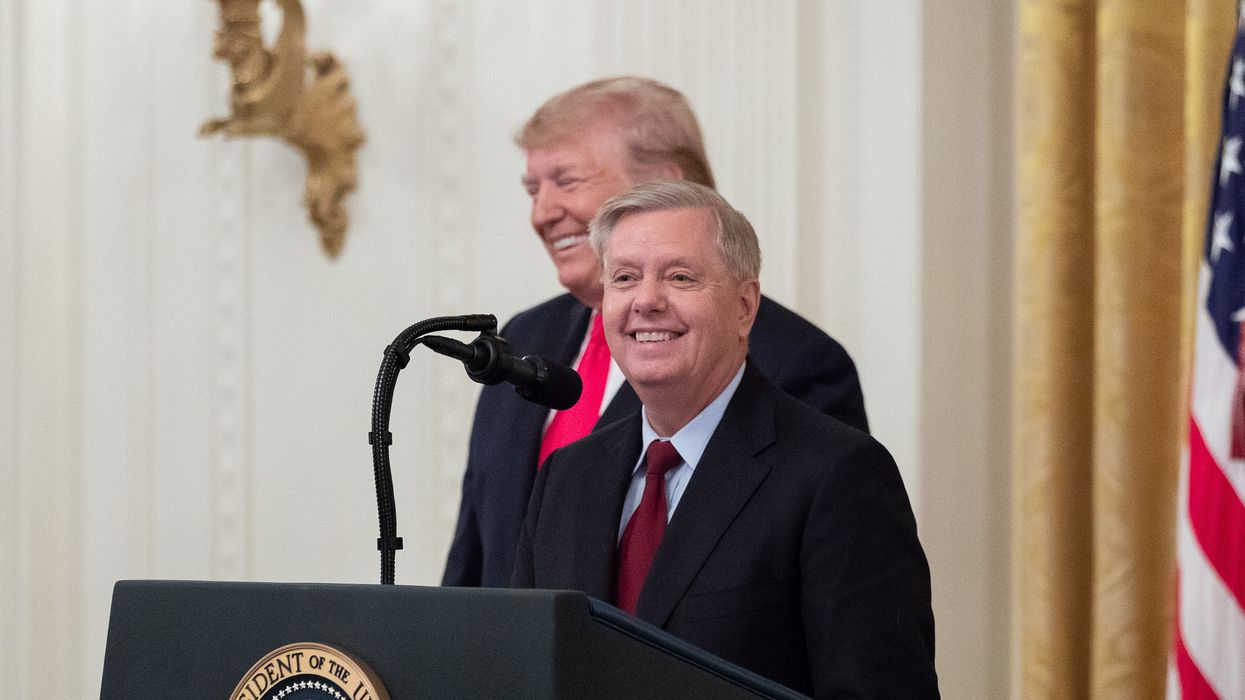 Day three of former President Donald Trump's impeachment trial was not quite as harrowing as day two, with its never before seen security footage of officials and staff being evacuated just steps away from a frothing mob, but it was startling nonetheless. Having meticulously laid out the case that Trump spent months stoking the fury of his voters the day before, Thursday's arguments took a look further back into his long history of violent rhetoric and drove home the point that if Trump is not held accountable and barred from running for office he will do it again.

"Tyranny, like hell, is not easily conquered, yet we have this consolation with us: that the harder the conflict, the more glorious the triumph."

If he was listening, no doubt Trump's ears perked up at the words "glorious" and "triumph" and, in a way, you couldn't blame him. The Impeachment managers delivered an irrefutable argument that proved the former president incited an insurrection which came horrifyingly close to causing death or injury to members of Congress, the Senate and the Vice President — and yet he is almost certain to be acquitted. A glorious triumph indeed.

He will be most pleased with those senators who boldly defend the Big Lie and say that he won the election and everything he did was perfect. There will be a few. There always are. Most, however, will quietly take the proverbial "off-ramp" offered by the discredited constitutional argument that the Senate has no jurisdiction to try a former president. It's an easy way out that Trump will no doubt accept, but he won't be particularly impressed and may require some more overt acts of loyalty if Republicans expect him not to call his Red Hat MAGA mob down on them.

There are also going to be a handful who will echo the defense team's apparent argument that the House managers were "offensive" and divisive by presenting their case with the graphic videos and documents showing the Jan. 6th violence and Trump's participation in it. This is apparently contrary to the need for "healing" which everyone knows is Donald Trump's primary concern. Trump's lead attorney Schoen went on Fox News to explain:

I think we know by now that if there's one thing Trump cannot abide, it's divisiveness.

Schoen's insistence that the manager's case is offensive has been echoed by Trump's most loyal henchman Lindsey Graham, R-SC, and he, along with Sens. Mike Lee, R-Ut, and Ted Cruz, R-Tx, met with the impeachment managers on Thursday night to help them with a strategy in advance of their presentation today. One might think that's a little bit unusual since they took an oath to be impartial, but this is Donald Trump's impeachment trial so oaths are obviously for suckers and losers.

As I write this, it's unknown what their advice might be, but perhaps this is a clue:

That's right. According to Graham, Nancy Pelosi has only herself to blame for the sacking of the Capitol, the mob hunting her down, breaking into her office, terrifying her staff and she really needs to pay for that. "Is this another diversionary operation?" Senator Ron Johnson, R-WI, recently asked about the impeachment trial. "Is this meant to deflect away from potentially what the speaker knew and when she knew it?" Johnson asked on Fox News. "I don't know, but I'm suspicious."

Graham and Schoen have been very derisive toward the House managers in general, but their opinion isn't widely shared, even by the Senate Republicans, most of whom were unable to summon that level of gall and reluctantly had to admit that the case was very compelling.

Texas Senator John Cornyn told CNN's Manu Raju, "I have to compliment the impeachment managers just in terms of their presentation preparation. I thought it was excellent. I don't agree with everything. But I think they set the standard pretty high." Of course he went on to say that the biggest concern he has is the moot constitutional question and "what that means to exact retribution on political opponents." That's pretty rich coming from the man who enthusiastically supported the president who led "lock her up" chants for four years and said "you'd be in jail" to his presidential opponent's face in a televised presidential debate.

Trump's lawyer Bruce Castor actually suggested on Tuesday that while the impeachment was illegitimate, there was no good reason not to have the former president arrested:

"[If you] actually think that Trump committed a criminal offense…you go and arrest him…. The Department of Justice does know what to do with such people, and so far I haven't seen any activity in that direction."

I thought "so far" was a nice touch. Florida Senator Marco Rubio seemed to think it made sense as well, tweeting, "The 6 Jan attack on the Capitol was far more dangerous than most realize and we have a criminal justice system in place to address it." It seems odd for Trump's defenders to take this tack, but I have to say that it is the best idea they've had in a very long time. Lock him up.

Whatever "strategy" they decide to go with, they know that it really doesn't matter because their client has threatened and intimidated the jury and they will vote to acquit regardless of what they say. We already know how this ends and it's profoundly depressing. After all, if what happened on Jan. 6th does not result in any consequences for the man who incited it, then it's hard to imagine what would.

Donald Trump has been impeached twice, both times for gross abuse of power. He was the most corrupt, incompetent, demagogic, radicalizing president in US history. And the Republican party cannot quit him even when he's no longer in power. Slate's Dahlia Lithwick describes watching this trial as "excruciating" and not just because it's painful to watch that rabid crowd descend into bloodlust and violent delusion, which it is. It's excruciating because this terrifying event was real, we watched it happen, and yet it changed nothing. And that's not even the worst of it:

[T]he same people refusing to contend with its factuality were witnesses and victims themselves, and they still don't care. Rep. Eric Swalwell narrating in the second person what happened to United States senators was astounding. This happened. And it happened to you. A recitation of facts that were excruciating one month ago is worse today, as new details come out of colleagues, like Romney and Pence, who were closer to harm than they even realized at the time. None of this will change their minds, a fact that starts a spiral of hopeless despair as the back of one's mind asks: What else will we have to live through before the Republican Party finds its way back to fact-based decision-making?

Watching these GOP senators flounce around like a gang of sullen teenagers, making excuses for Trump's shameless attempt to overturn the election, it's clear that we have a very long way to go before that happens. I don't even want to think about what we will have to live through before we get there.