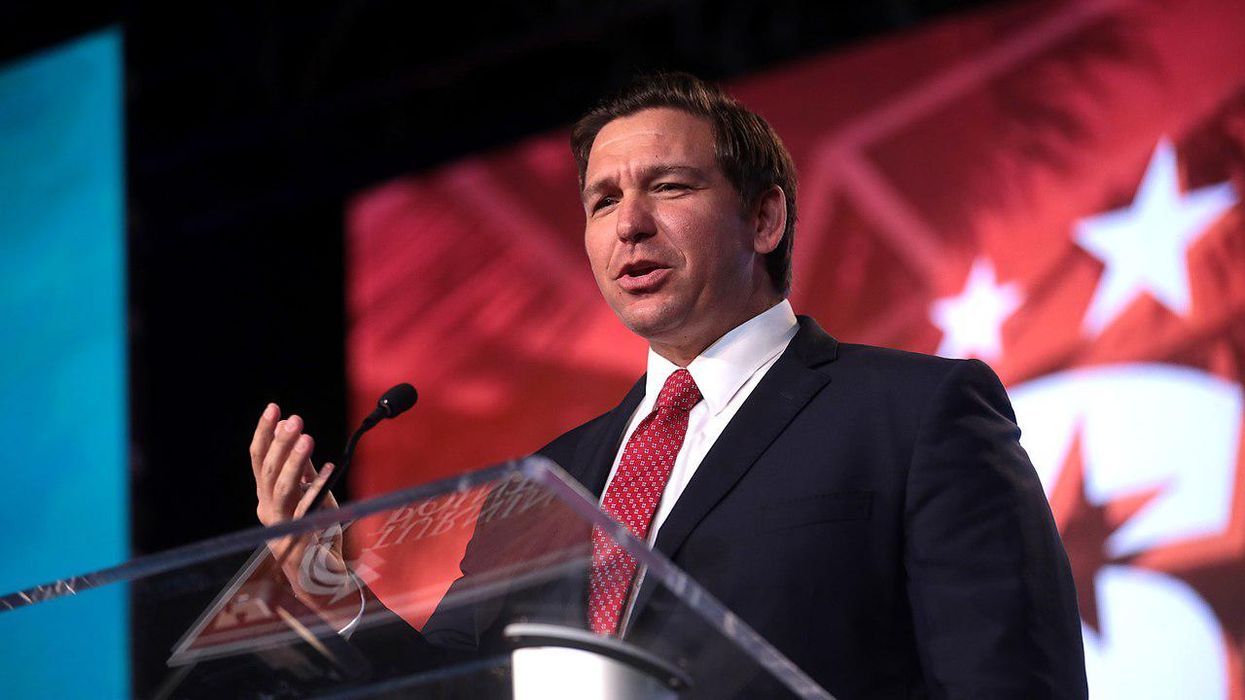 All over the United States, there are still many questions about how and when the various COVID-19 vaccines will be distributed — and in Florida, Republican Gov. Ron DeSantis is drawing criticism for threatening to pull vaccine distribution from counties that say unfavorable things about his plans.

According to South Florida Sun Sentinel reporters Skyler Swisher, Steven Lemongello and Richard Tribou, "Gov. Ron DeSantis defended his decision Wednesday to steer COVID-19 vaccine to a planned community with family ties to a Republican power couple, threatening to pull doses if local officials criticize his distribution methods. DeSantis is facing questions over his decision to provide seniors living in two of Manatee County's wealthiest ZIP codes with special access to the vaccine."

The Sun Sentinel reporters note that a "pop-up distribution site" is "serving residents of Lakewood Ranch, a planned community in Southwest Florida with family ties to Liz and Dick Uihlein" — who the New York Times has described as a "powerful conservative couple." Dick Uihlein donated $900,000 to the Friends of DeSantis political committee in 2018, the year he narrowly defeat Democrat and former Tallahassee Mayor Andrew Gillum in Florida's gubernatorial race, and 2019. The Uilheins were major donors to former President Donald Trump's reelection campaign in 2020.

At a February 17 press conference, DeSantis dismissed accusations of political favoritism with COVID-19 vaccine distribution and told reporters, "If Manatee County doesn't like us doing this, we are totally fine with putting this in counties that want it."

Manatee County Commissioner Misty Servia wants to know why the "most affluent" parts of that county are being prioritized with COVID-19 vaccine distribution.

Servia told the Bradenton Herald, "For the life of me, I can't understand why we would vaccinate the most affluent neighborhoods in the county ahead of everyone else, especially the underserved neighborhoods and large number of manufactured home parks in our community."

Liz Uihlein has been highly critical of the stay-at-home orders and social distancing measures that have been enacted in response to the COVID-19 pandemic, which she described as "overhyped" in April 2020. But the global health crisis that Liz Uihlein considers "overhyped" has killed more than 2.4 million people worldwide and over 490,000 people in the United States, according to Johns Hopkins University in Baltimore.

Rep. Debbie Wasserman Schultz is among the among the Florida Democrats who has accused DeSantis of showing political favoritism with COVID-19 vaccine distribution. The Sun Sentinel quotes the congresswoman as saying, "To threaten that he would pull vaccine if people don't like the way the distribution system is working is vile and shows the callous indifference he has had in how the vaccine has been handled."