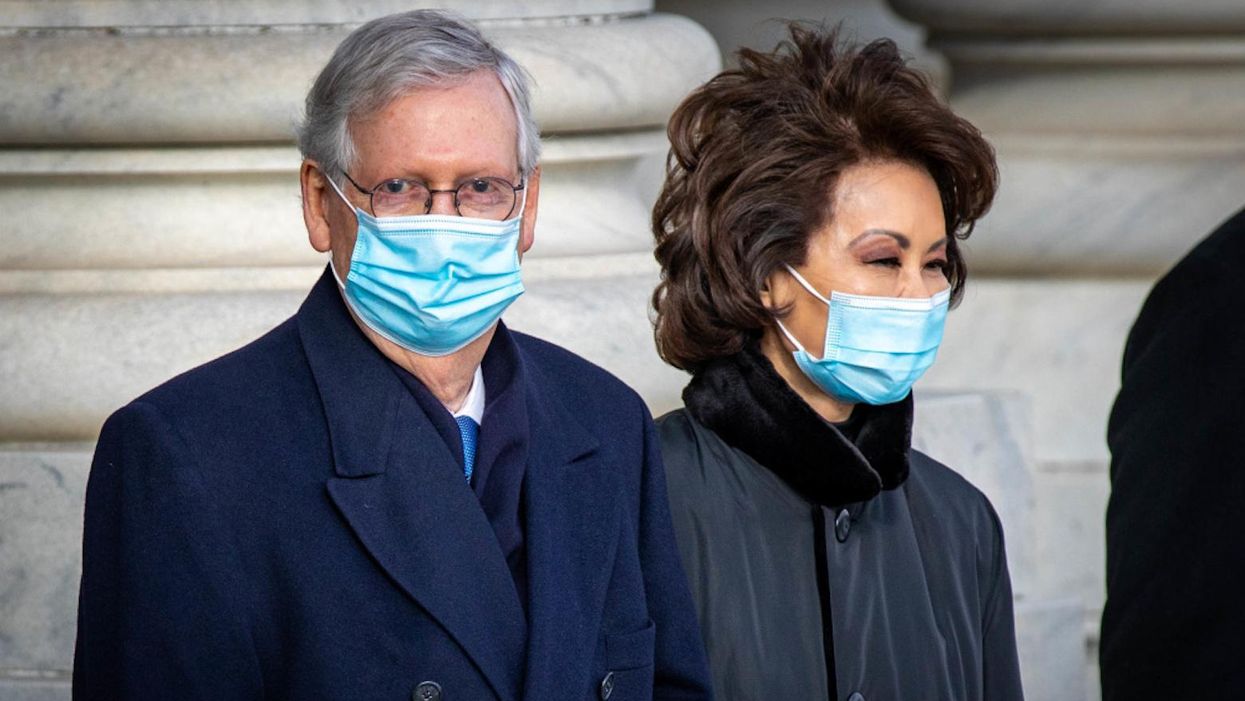 Senate Majority Leader Mitchell McConnell takes his position during the pass in review ceremony as part of the 59th Presidential Inauguration ceremonies at the U.S. Capitol in Washington, D.C., Jan. 20, 2021. Military members from across all branches of the armed forces of the United States, including Reserve and National Guard components, provided ceremonial support during the inaugural period. (DoD photo by U.S. Army Sgt. Gabriel Silva)
John Stoehr
February 10, 2021

I know what Mitch McConnell said, but I'm not a fool. Neither are you. He continues to leak information about "his thinking" to reporters who in turn tell us the Senate minority leader believes a vote for Donald Trump's guilt or innocence is a matter of conscience in his party, not a foregone conclusion anyone with eyes can see coming.

According to Bloomberg, "his thinking" suggests some of the 44 Republicans, who said with their vote Tuesday night that prosecuting a former president is unconstitutional, could be persuaded to convict him on the strength of the evidence against him.

This is hard to square with a couple of things. One, that McConnell has said openly he's not an impartial juror. Two, that he and all but six Republicans said moving forward was unconstitutional. It does not matter how persuasive the Democratic impeachment managers are. It does not matter how much proof they marshal in support of their allegation. The fix is in. Mitch McConnell is pretending it's not.

Kevin Cramer, from North Dakota, said opponents of the impeachment trial won't likely change their minds. "It's going to be a hard mental trick to convince yourself that, on the one hand, this is an unconstitutional exercise and, on the other hand, I should be open to conviction. That's a pretty tough turn for smart people to make."

Yeah, it's not, though. Smart people who are engaging morally and democratically in a republican government predicated on the universal principles of equality and freedom—in that order—ought to be able to subordinate themselves to the will of the majority. A smart person whose mind is truly open to the world should find little, if any, tension between believing in an answer strongly and conceding that the question is settled.

That's what happened yesterday. Let's be very clear about that. Half a dozen Republicans joined all 50 Democrats to declare in bipartisan fashion that the United States Senate has the constitutional right to prosecute a former president who was impeached during his final days. It's settled. There is no higher authority on these matters. The trial will proceed, lasting seven to 10 days. A smart person should be able to accept that in order to move on to judgment based on the power of the arguments.

What is a "pretty tough turn," however, is voting against proceeding with Trump's trial without being able to point to anyone with a good argument against proceeding with Trump's trial. That, too, happened yesterday. Again, let's be very clear. The former president's attorneys, Bruce Castor and David Schoen, were bad. The former was your great uncle telling a story about the glory days of high school football while looking for his car keys, forgetting where he was in the story, and starting over from the beginning. The former was … I'm not sure, really. But he was very, very aggrieved.

A smart person whose mind is truly open to the world could conclude the prosecution was good while the defense was bad, the result being victory for the prosecution. That was Bill Cassidy's thinking. The Republican senator from Louisiana was the only one to break from Senator Rand Paul's previous motion holding that Trump's trial was unconstitutional. Cassidy had voted for it, but after witnessing Bruce Castor and David Schoen's incoherence, he decided evidently it was best to base his vote Tuesday on a coherent argument, which the Democrats provided, rather than an incoherent one.

It's more than dishonesty, though. In refusing to concede to settled questions—whether it's the constitutionality of prosecuting a former president or whether Donald Trump should remain president—the Republicans are being antidemocratic but also disrespectful of things everyone else respects. They don't recognize the authority of a democratic majority, of a democratic process or of empirical reality itself, because they won't. They refuse to. The authority they recognize is theirs. They are hard at work acting like they believe in this thing called a republic. You don't have to believe it.

CORRECTION: Donald Trump's attorney is David Schoen, not Douglas Schoen, as I had originally written. Douglas Schoen is pollster, political adviser and nice guy. I regret the error.