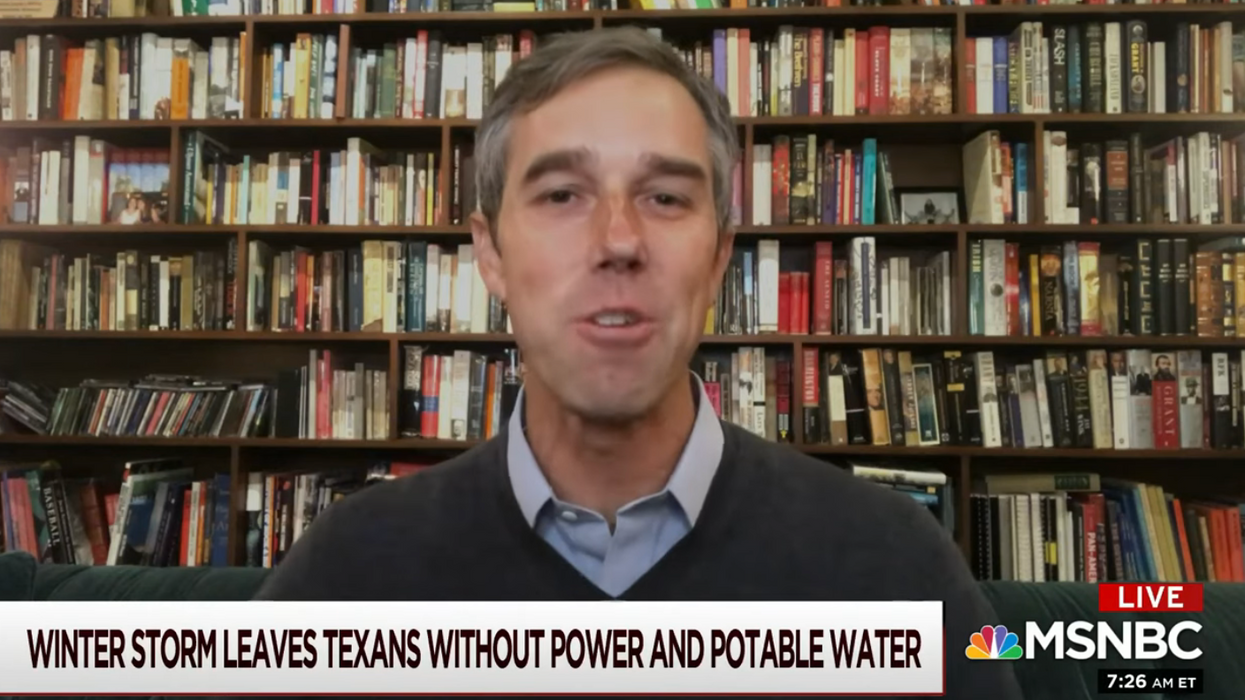 Texas Gov. Greg Abbott, Fox News' Tucker Carlson and Rep. Dan Crenshaw are among the people on the right who have been making the false claim that green energy is to blame for recent energy woes in the Lone Star State, which is facing an unprecedented emergency as millions of people without electricity face life-threatening cold temperatures. El Paso Democrat and former Rep. Beto O'Rourke discussed the crisis during a February 18 appearance on MSNBC's "Morning Joe," debunking those green energy claims and offering several recommendations on things that Texas can do to avoid this type of nightmare in the future.

O'Rourke explained that living in El Paso, he has avoided the worst of Texas' cold snap/energy nightmare, telling "Morning Joe" hosts Joe Scarborough and Mika Brzezinski, "El Paso, where I am, is not part of ERCOT, which is the electricity grid that most of Texas operates under. But in terms of news, Mika, for the rest of Texas, I wish I had better news. It was in the 20s in Dallas, in Fort Worth, in Houston, in San Antonio last night, with many millions without power and millions more under boiled water notices — which begs the question, 'If you don't have power, if you don't have electricity, if you don't have gas, how are you going to boil that water?'.... Many people don't even have water right now. And the utilities are unable to predict, with any certainty, when folks will have power back. People have been going not hours, but days, without electricity or being able to warm their homes."

Brzezinski asked the former congressman to discuss the performance of Texas Republicans like Abbott and Sen. Ted Cruz during the crisis — to which he responded, "In Texas, you have an example of what happens when a state is governed by those who do not believe in governance to begin with."

O'Rourke stressed that Texas' energy woes during the freezing temperatures is not a matter of green energy versus fossil fuels as Abbott has been claiming, but rather, a failure to "weatherize our power generators, whether it's coal or gas or nuclear or wind or solar."

Texas Republicans, O'Rourke noted, have failed to make sure that there is "excess capacity for emergencies like these" — adding, "Now, of course, they're pointing the finger at Congresswoman Ocasio-Cortez, the Green New Deal — everyone and everything except for themselves."

O'Rourke laid out some recommendations for the future, explaining, "I'd incentivize or mandate that the power generators in Texas store additional capacity…. Second, I would connect ERCOT and the rest of Texas to the national grid so that when we have excess power, we can sell it to the rest of the market and plow those profits back into weatherizing and improving the generation and transmission in Texas. And when we're in an emergency like this, we can draw down power from the rest of the country."

O'Rourke continued, "Third, I would require those generators to weatherize those systems….. And the fourth and perhaps the most important thing is: I would take the science and climate change seriously."