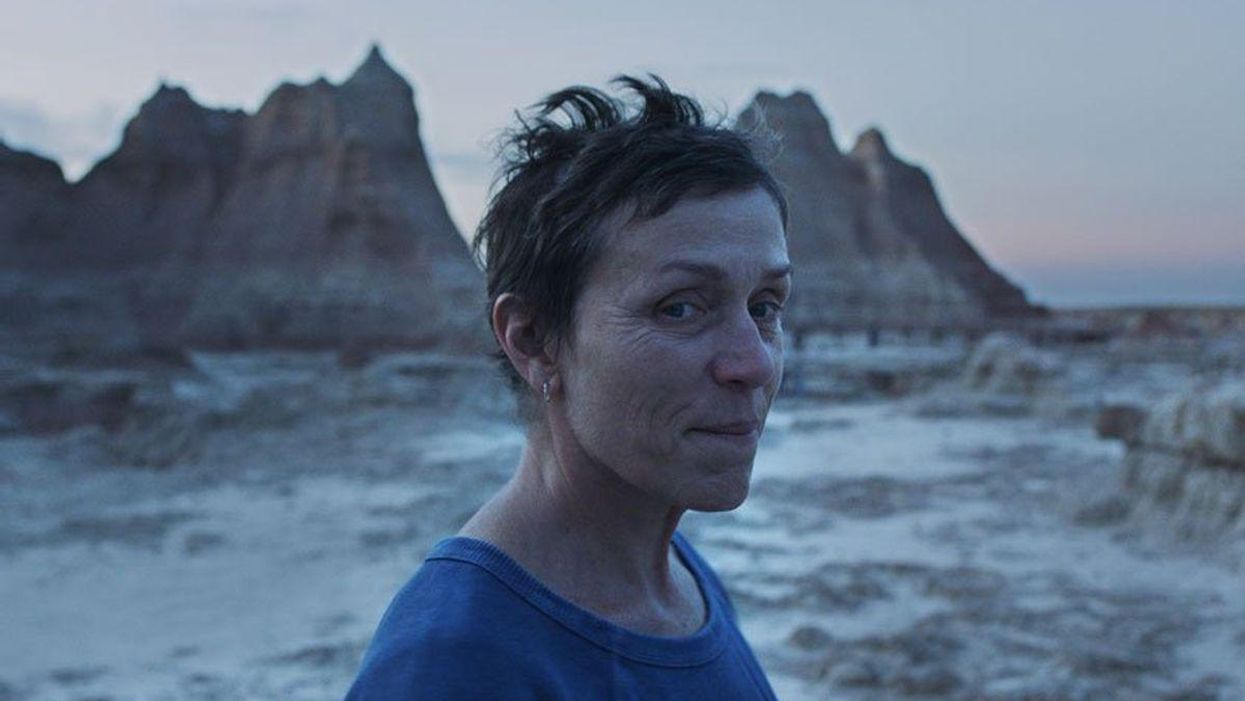 "I'm not homeless, I'm just . . . houseless. Not the same thing," Fern (Frances McDormand) insists early on in "Nomadland," writer/director Chloé Zhao's elegiac drama, based on Jessica Bruder's book. The film (out now on Hulu) had premiered recently at the Toronto Film Festival in tandem with the canceled Telluride Film Festival and in solidarity with the Venice Film Festival (where it just won the Golden Lion). It will also be a centerpiece selection at the upcoming New York Film Festival.

Fern is first seen loading her van, named "Vanguard," and taking seasonal work at Amazon. She parks in an RV community with Linda May (playing herself), another woman who has taken to life on the road. In a heartfelt speech, Linda May describes contemplating suicide, and explains she can't get by on the benefits of early retirement. Fern has her own story of economic hardship; she lived in Empire, Nevada with her late husband until the U.S. Gypsum Corporation plant shut down in 2011 and the zip code was discontinued.

"Nomadland" is certainly about the impact of the Great Recession and there are points made about being in debt, the "tyranny of the dollar," and the freedom of living life on your own terms. Zhao thankfully, never gets too didactic, though the film is best when Fern is in motion. (Oddly, this drama feels like a mashup of "The Lady in the Van," Alan Bennett's memoir about his bond with a transient woman who parked in his driveway for 15 years; "Nickel and Dimed," Barbara Ehrenreich's investigation of unskilled labor in America; and Cheryl Strayed's "Wild.")

When Fern heads to Arizona and a camp run by Bob Wells (as himself), she hears stories from other "nomads": a vet with PTSD; a woman on a "healing journey," after losing both her parents to cancer; and a worker from corporate America who retired early so as not waste a moment of her life. These tales are sad and earnest and explain why some individuals want to eschew social norms, reconnect to nature, and become a part of this "tribe." But the real people playing themselves have conviction. And for some of them — as is the case with Fern — this life is more a necessity than a true desire. Fern's purpose for her nomadic life becomes clear late in the film. It is almost disappointing that this is revealed. It is as if Zhao does not trust the audience to determine the root of her restlessness from what is presented.

"Nomadland" deftly captures the community of these salt-of-the-earth folks who swap items, and value only a few sentimental possessions. (Fern's are a set of dishes). They sit around campfires, sometimes go dancing, and help each other out, as when someone gets a flat tire, wants a cigarette or needs medical assistance.

The drama is kept to a minimum. Zhao takes an almost anthropological approach, much like she did in her previous features, "The Rider," and "Songs My Brothers Taught Me," to show what daily life is like for the characters. They work menial jobs, like cleaning restrooms, and cook in their vans. But then Zhao features shots of Fern driving through a mountainous region, floating naked in a clear river, or walking through a field at sunset, or admiring trees in a forest. Ludovico Einaudi's piano music creates a sense of poignancy during these moments but his score sounds like he has been listening to too much George Winston. Moreover, these glorious images don't quite jibe with the hardscrabble lives. The film falters whenever it slips into sentiment.

At one point Fern has a meet-cute with Dave (David Strathairn) over a can opener and they become friendly, reconnecting later in the Badlands of South Dakota. They have an easygoing friendship, and Dave obviously wants it to become romantic. Fern, however, is fiercely independent, and at times abrupt with him. After they both take jobs working at Wall Drugs, Dave is soon pulled in one direction by his son, which drives Fern to go back on the road.

There is little tension about if Fern ever settles back down because that is not the point. "Nomadland" handles this elegantly and eloquently in what is arguably the film's most moving exchange between Fern and her sister, Dolly (Melissa Smith). But Fern is just as impassioned telling someone that she sees value in how she built out her van, or when she refuses to take a bed in a church on a cold night, and those moments reveal much about her character.

Fern may often be alone, but she never comes across as lonely. She is seen reading in a laundromat, celebrating New Year's Eve with a sparkler, and inexplicably playing a flute in her van. McDormand, who is in every scene, makes Fern as tough at the plant she named for in that she adapts and survives. The actress gives a committed performance that will likely garner her an Oscar nomination. Her weathered face shows her grit and fortitude, and she communicates her emotions in the way she knits her brow or darts her eyes. But Fern is also open and friendly, and she has some lovely scenes with Swankie (playing herself), a fellow nomad.

"Nomadland" is certainly well-crafted. The cinematography by Joshua James Richards is exquisite. But somehow, the film does not quite deliver the emotional impact Zhao is likely striving to achieve. Then again, perhaps the point is that there is no there there.

"Nomadland" is now streaming on Hulu.