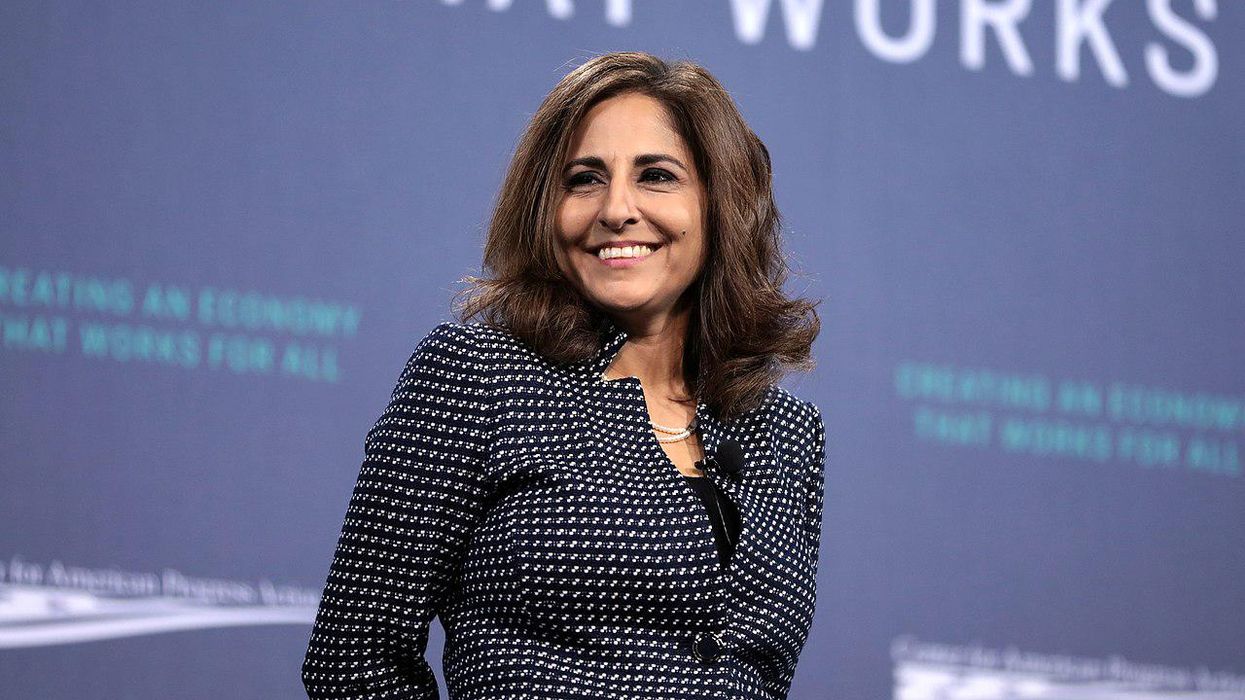 Neera Tanden speaking with attendees at the 2019 National Forum on Wages and Working People, hosted by the Center for the American Progress Action Fund and the SEIU at the Enclave in Las Vegas, Gage Skidmore
Alex Henderson
February 24, 2021

With so many Republicans railing against Neera Tanden — President Joe Biden's nominee to head the Office of Management and Budget — and centrist Democratic Sen. Joe Manchin of West Virginia having announced that he won't vote to confirm her, Tanden's chances of heading the OMB aren't looking good. At issue, Republicans say, are tweets Tanden posted in the past that were highly critical of Republicans. Journalist Jill Filipovic slams Tanden's opponents in an op-ed for the Washington Post, stressing that GOP senators are total hypocrites in light of all the inflammatory tweets that former President Donald Trump posted during his years in the White House.

"By wringing their hands over her supposedly mean tweets," Filipovic argues, "congressional Republicans have attempted to don the mantle of civility while remaining stooges to Donald Trump, the most boorish president in history, on Twitter and off. Their disingenuousness, and their apparent belief that they are very special snowflakes who deserve special deference, is at the heart of the movement to prevent her confirmation. But tweets really aren't what has put her nomination in peril — and it's not just Republicans imperiling her. Tanden, a highly qualified candidate to be Biden's budget director, is being swamped by a perfect storm of bipartisan hypocrisy."

Tanden, Filipovic notes, is the "kind of bootstraps personal story that conservatives usually cheer." She was born to immigrant parents and went on to attend Yale Law School before going on to head the Center for American Progress, a Democratic think tank — and Republicans, according to Filipovic, should admire Tanden's drive and ambition despite their policy differences with her.

"Even a moderate Republican such as Sen. Susan Collins (Maine) says she won't vote to confirm Tanden, based in part on her 'temperament,'" Filipovic laments. "Manchin, the first Democrat to announce that he would withhold support, cited Tanden's 'public statements and tweets' and 'overtly partisan statements'…. Concern about Tanden's tweets is rich, coming from Collins and other Republicans, whose party is in thrall to a former president who was banned from Twitter — and from Manchin, who voted to confirm several of Trump's most acerbic nominees."

"By her own admission," Filipovic writes, "Tanden has let some harsh tweets fly. But she has apologized, while many ill-mannered Republicans haven't. When it comes to civility, Republicans simply raise the floor for Democrats, as they allow members of their own party to sink ever lower. What stands out most from Tanden's confirmation hearings isn't what she's tweeted, but the hypocrisy of Republicans reaching for their smelling salts."

Another factor, the journalist adds, is sexism.

"So far, Biden is sticking with her," Filipovic writes. "But this episode reveals an uncomfortable truth: As long as we expect women to be accommodating while rewarding male leaders who are aggressive and even cantankerous, 'temperament,' exemplified by some impolitic tweets, will remain an embarrassing and transparent justification for keeping women out of power."