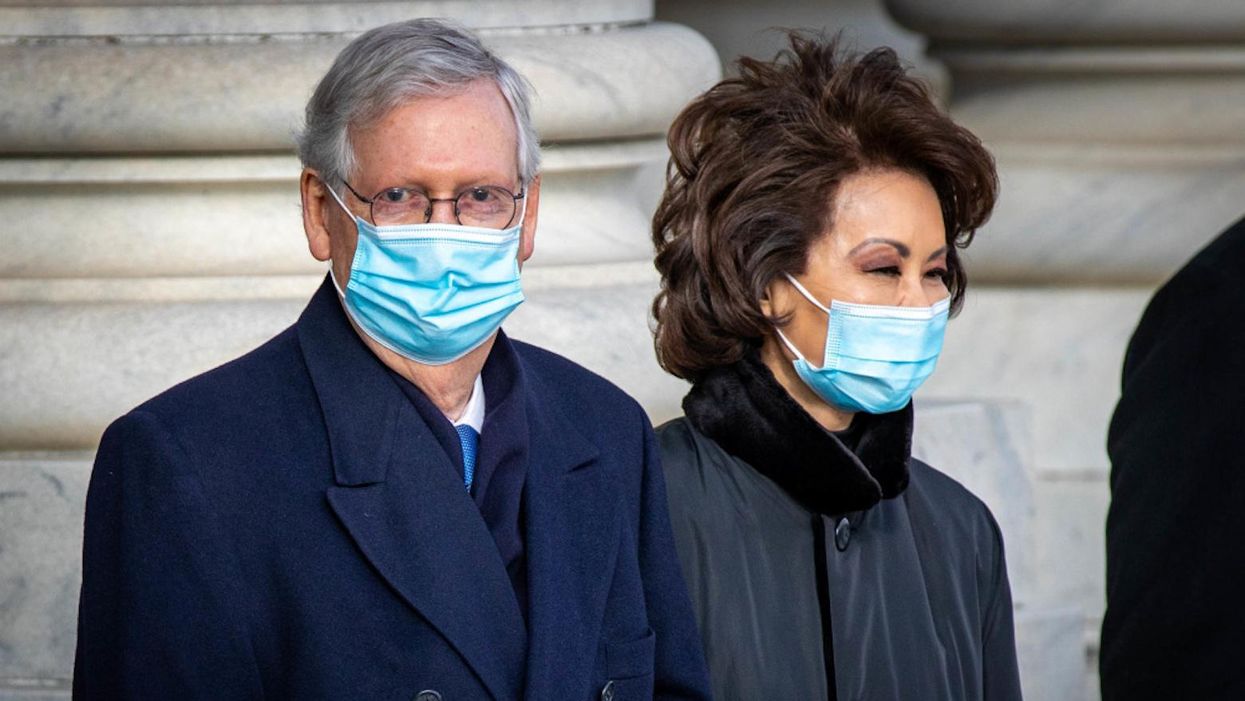 Senate Majority Leader Mitchell McConnell takes his position during the pass in review ceremony as part of the 59th Presidential Inauguration ceremonies at the U.S. Capitol in Washington, D.C., Jan. 20, 2021. Military members from across all branches of the armed forces of the United States, including Reserve and National Guard components, provided ceremonial support during the inaugural period. (DoD photo by U.S. Army Sgt. Gabriel Silva)
Cody Fenwick
February 02, 2021

Senate Minority Leader Mitch McConnell issued a rare scathing attack on a fellow congressional Republican today, deriding Marjorie Taylor Greene's promotion of conspiracy theories a "cancer" on the party Monday in a statement given to The Hill.

McConnell didn't mention Greene by name, who has been under intense scrutiny after a renewed focus on her delusional, dangerous and bigoted beliefs, but his remarks left no doubt who he was talking about: "Somebody who's suggested that perhaps no airplane hit the Pentagon on 9/11, that horrifying school shootings were pre-staged, and that the Clintons crashed JFK Jr.'s airplane is not living in reality," the statement said. "This has nothing to do with the challenges facing American families or the robust debates on substance that can strengthen our party."

The statement suggested that McConnell is more willing to fight the Trumpian forces that threaten to completely overtake the GOP, even after the defeat and disgrace of the former president. Greene is a devoted follower of Donald Trump and recently claimed that he spoke with her on the phone to offer support. Meanwhile, Democrats are pushing for a vote that could force Greene off the House Education and Labor Committee, particularly in light of her comments casting doubts on mass shootings such as the attack that killed 17 people in a Parkland, Florida, high school. She has also endorsed conspiracy theories that include clear anti-Semitic tropes.

Greene lashed out in response to McConnell's statement.

The real cancer for the Republican Party is weak Republicans who only know how to lose gracefully.

This is why we are losing our country.
— Marjorie Taylor Greene 🇺🇸 (@mtgreenee) February 2, 2021

Separately, CNN published a story Monday night showing McConnell taking another swing at the most enthusiastically pro-Trump faction of his party. Republicans such as Rep. Matt Gaetz of Florida have pushed to have Wyoming Rep. Liz Cheney stripped of her leadership position in the House GOP over her vote to impeach Trump for his role in the Capitol insurrection. But McConnell stood up for her.

"Liz Cheney is a leader with deep convictions and the courage to act on them," he said in a CNN statement. "She is an important leader in our party and in our nation. I am grateful for her service and look forward to continuing to work with her on the crucial issues facing our nation."

There's a battle going on over how the GOP will define itself in its post-Trump period. Recent developments have suggested that it's still the Trump party to its core, especially as the vast majority of Senate Republicans appear poised to acquit the former president in his trial. If anything, the House GOP caucus is even more fervently Trump-aligned than the Senate. But McConnell's new remarks suggest he'd at least like to be seen as pushing back against this clear trend in the party, at least for the moment.

This story had been updated to clarify a reference to McConnell's statement about Greene.