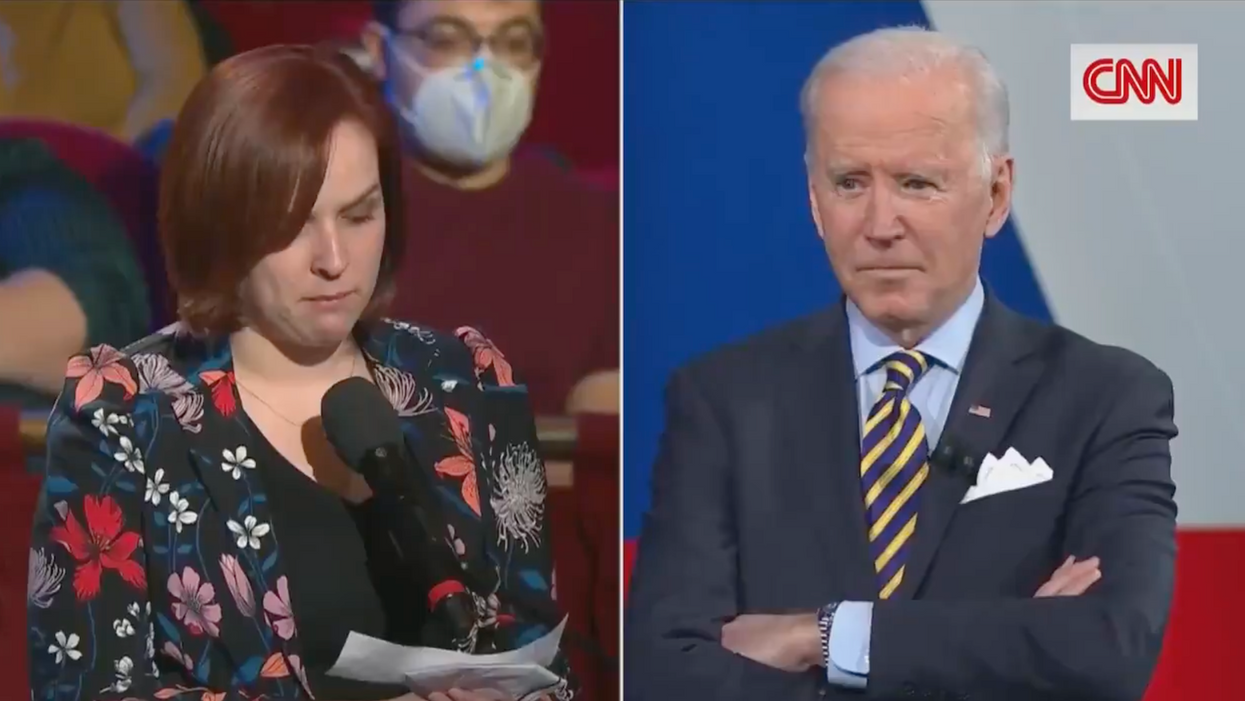 After President Joe Biden told the nation during a CNN town hall Tuesday night that he "will not" cancel $50,000 in student loan debt per borrower, Rep. Alexandria Ocasio-Cortez was among the many progressives who pushed back against the president's false narrative about who would benefit from the move and urged advocates to keep up the pressure.

When a town hall attendee said during Tuesday's event in Milwaukee, Wisconsin student loan debt is "crushing" her family, friends, and millions of Americans and urged Biden to unilaterally forgive a minimum of $50,000 per borrower, Biden responded, "I will not make that happen."

The president went on to say that he doesn't want to forgive "billions of dollars of debt for people who have gone to Harvard and Yale and Penn" instead of using "that money to provide money for early education for young children who... come from disadvantaged circumstances."

But Ocasio-Cortez and others argued there is no reason the wealthiest nation on the planet can't both fund early childhood education and forgive some of the combined $1.8 trillion in student loan debt saddling more than 40 million Americans.

"Nowhere does it say we must trade-off early childhood education for student loan forgiveness," Ocasio-Cortez tweeted late Tuesday. "We can have both."

The New York Democrat also rejected the notion that attendees of Harvard, Yale, and other elite universities should categorically be denied student loan relief, noting that many people from working-class families attended such prestigious schools and are now saddled with debt due to their inability to afford the sky-high costs.

"Who cares what school someone went to? Entire generations of working-class kids were encouraged to go into more debt under the guise of elitism. This is wrong," Ocasio-Cortez said. "The case against student loan forgiveness is looking shakier by the day... Biden's holding back, but many of the arguments against it just don't hold water on close inspection. We can and should do it. Keep pushing!"

In lieu of canceling $50,000 in student loan debt per borrower—a proposal backed by Senate Majority Leader Chuck Schumer (D-N.Y.), Sen. Elizabeth Warren (D-Mass.), and other prominent Democratic lawmakers—Biden said he is "prepared to write off" $10,000 a person, make community college free, and eliminate state school tuition for students whose families earn less than $125,000 a year.

While Biden presented his higher-education proposals as sensible and pragmatic alternatives to unilateral debt cancellation—which he falsely insisted he doesn't have the authority to carry out—racial justice activist Bree Newsome argued that "there's nothing practical about Biden's stance on student loan forgiveness."

"It's just an ideological stance on being moderate that isn't informed by what makes sense from either an economic, gender, or racial justice standpoint," Newsome wrote. "That's why he's out of step with other Dems on this."

"Why do we have to choose between student loan debt forgiveness and funding childhood education?" Newsome asked. "What does the $10K cap have to do with borrowers from elite schools? Why are we excluding elite schools? There are a bunch of first generation students of color at elite schools."

Vanessa A. Bee, an editor at Current Affairs, offered a similar—albeit more sharply worded—critique on Twitter:

Biden's opposition to cancelling $50,000 in student loan debt via executive order is not new. In December, as Common Dreams reported, Biden sparked backlash by saying he'd "be unlikely" to take such a step and questioned whether he could do so legally.

But legal experts have said the president clearly has the authority to direct the secretary of education to cancel $50,000 in student loan debt without congressional approval, a move that a majority of Americans support.

In an analysis (pdf) released last September, Eileen Connor, Deanne Loonin, and Toby Merrill of the Project on Predatory Student Lending wrote that "broad or categorical debt cancellation would be a lawful and permissible exercise of the secretary's authority under existing law."

"Yes, POTUS does have the authority to cancel student debt with the stroke of a pen," Rep. Ayanna Pressley (D-Mass.), the lead House sponsor of a resolution urging Biden to forgive $50,000 in student debt, tweeted late Tuesday. "He can and must use it. The people deserve nothing less."

In a joint statement Wednesday morning, Warren and Schumer said that "an ocean of student loan debt is holding back 43 million borrowers and disproportionately weighing down Black and Brown Americans."

"Presidents Obama and Trump used their executive authority to cancel student loan debt," the senators noted. "Cancelling $50,000 in federal student loan debt will help close the racial wealth gap, benefit the 40% of borrowers who do not have a college degree, and help stimulate the economy. It's time to act. We will keep fighting."