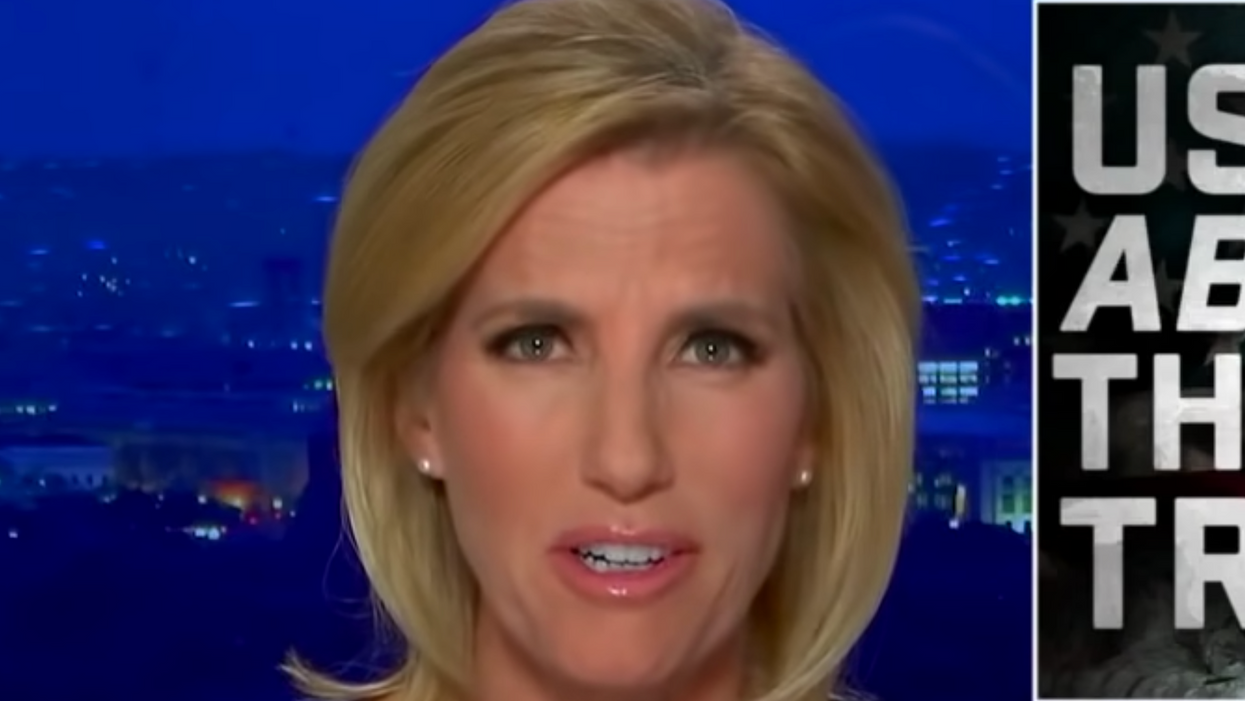 On Tuesday, the body of Capitol Police Officer Brian Sicknick, who was killed by pro-Trump insurrectionists during the Jan. 6 attack on the Capitol, was laid in honor in the Capitol Rotunda. President Joe Biden and first lady Jill Biden arrived that evening to pay their respects. Americans were able to watch the ceremony on multiple news channels—but not on Fox News. On Fox News, Sicknick's ceremony was barely mentioned.

Instead, Fox News' ever-frothing opinion hosts did what they do best: stoke audience panic over all number of bizarre side issues, from a barrage of far-right conspiracy theories promoted by the fascist Laura Ingraham to Sean Hannity's important report that somebody got ejected from a Lakers game "FOR HECKLING LEBRON."

Fox's attempt to mostly pretend Sicknick's ceremony was not happening did not go without notice. In fact, it seems pretty much everybody noticed it, to the point that both blasting and mocking Fox for their silence became the evening's hot Twitter pastime.

Most of the criticism noted that Fox News had long pretended that "Blue Lives Matter," only to have it not matter at all when it came to an officer murdered by a Trump-devoted mob. The Washington Post even put some numbers to it with an analysis of how often the network even bothered to mention Sicknick compared to competing networks, even after the network ran "thousands" of segments about other police deaths during the previous four years.

Sean Hannity and other Fox hosts bear direct responsibility for Brian Sicknick's death, because Sean Hannity and other Fox hosts were a primary avenue of conspiracy claims theorizing that Trump was the true winner of the election, cheated out of the presidency through widespread fraud. It was a hoax each and every time network hosts said it; Fox may soon be forced to pay out gargantuan sums to two voting machine manufacturers targeted by network hosts with known false claims, but each of the network's conspiracy claims was known to be false at the time the hosts made them. Though literally dozens of lawsuits were filed by Trump's allies and other Republicans, not one was able to identify any of the supposed subterfuge Fox's barrage of conspiracy-minded guests were claiming. It was a propaganda push intended to justify a proposed nullification of a United States election. It was a plot to topple democratic government based on false claims and overt propaganda.

On Jan. 6, it was acted upon by Americans who used the same claims promoted by Fox News as justification for violent insurrection and the attempted assassination of Trump-critical lawmakers.

Fox News did not avoid coverage of the honors being given to Sicknick merely because his death failed to conform to their usual propaganda slant. Fox News kept its silence about Sicknick's death because the network's promotion of an anti-democracy hoax was the direct cause of his death.

Every police injury that day is due to Fox News' legitimization of anti-democracy conspiracy claims that were known to be false each time Fox propagandists said them. Every public injury, every bit of damage. The National Guard now guards the Capitol because Fox's so-called "opinion" programs lied to America, repeatedly, in an intentional campaign to delegitimize the results of the United States elections. Every victim should join in lawsuits against the network and its hosts, and take them for every penny. That would still not address the clear and present danger Fox's hoax promotion represents to our very democracy; now that the propagandism of the network was a significant factor in an attempted violent coup against the government, the Murdoch family's cesspool of disinformation has transformed from a political nuisance to a significant domestic terror threat.

This is not the first time Fox has sent killers to their political enemies, nor the first time they have done so via a relentless stream of conspiracy segments targeting specific Americans and groups with false claims intended specifically to demonize their targets. Former host Bill O'Reilly targeted an abortion-providing Kansas doctor with false claims, repeatedly calling him a "baby killer" responsible for infanticide, after which that doctor was shot and killed outside his church by a far-right activist. Former host Glenn Beck began spouting increasingly bizarre conspiracy theories naming all manner of Democratic and liberal groups in chalkboard scribbles that supposed inscrutable connections between each; one of those named, the Tides Foundation, soon became the intended target of a far-right mass shooter.

It is a pattern. Fox News hosts manufacture false claims to demonize particular, named enemies. The far right targets those enemies with death threats or actual assassination. The network then shifts to radio silence, mentioning the violence only in passing or to deny responsibility.

It is a matter mostly of luck that that network's multi-year campaign against George Soros, claimed to be behind nearly every world event in asinine conspiracies elevated from far-right and neo-Nazi groups, has not yet resulted in his death. But they continue to promote the conspiracies, relentlessly, nonetheless.

Like Republican lawmakers who continued to peddle the same hoaxes, and for the same reasons, Fox News is a co-conspirator in the death of Officer Brian Sicknick. Its executives are culpable, because it was evident that the claims, if believed, would inspire allegedly "justified" violence. The network's most dishonest hosts chose to pursue anti-democratic sedition rather than acknowledge that Trump-led claims of invisible fraud were fraudulent, and they chose to entertain repeated claims suggesting the Biden presidency was illegitimate because it served their ideological purposes to claim so. This death is their responsibility—if they had spoken up against the conspiracies the mob used to justify their violence, the mob would have been a fraction of its Jan. 6 size. If the Republican Party was not at this point a fully fascist and anti-democratic force, they would have not engaged in conspiracy hoaxes as means of erasing an election loss that was not even particularly close.

Not all propaganda is treason, but propaganda intended to provide legitimacy for an attempted overthrow of this nation's government certainly should be counted as such. Hannity and other hosts crossed that line in service to a buffoonish and delusional con man—and in service to an ideology that no longer recognizes elections themselves as legitimate, if the outcome is not to their liking. The network is attempting to tap-dance through a failed violent insurrection they helped deliver to the door of the Capitol, and are minimizing the consequences of the violence so as to protect themselves from blame.

They could reform, but do not intend to. The Murdochs even issued a post-coup order doubling down on talking-head programs and slashing news coverage yet again; we can presume from that move that they believe catering to the fascist far-right will be profitable enough to offset whatever violence their disinformation and hoaxes fuel next.

This is where we're at right now. Laura Ingraham brings on an unidentified "whistleblower" -- with hidden face and… https://t.co/mcySWGuQsn
— Justin Baragona (@Justin Baragona)1605065883.0