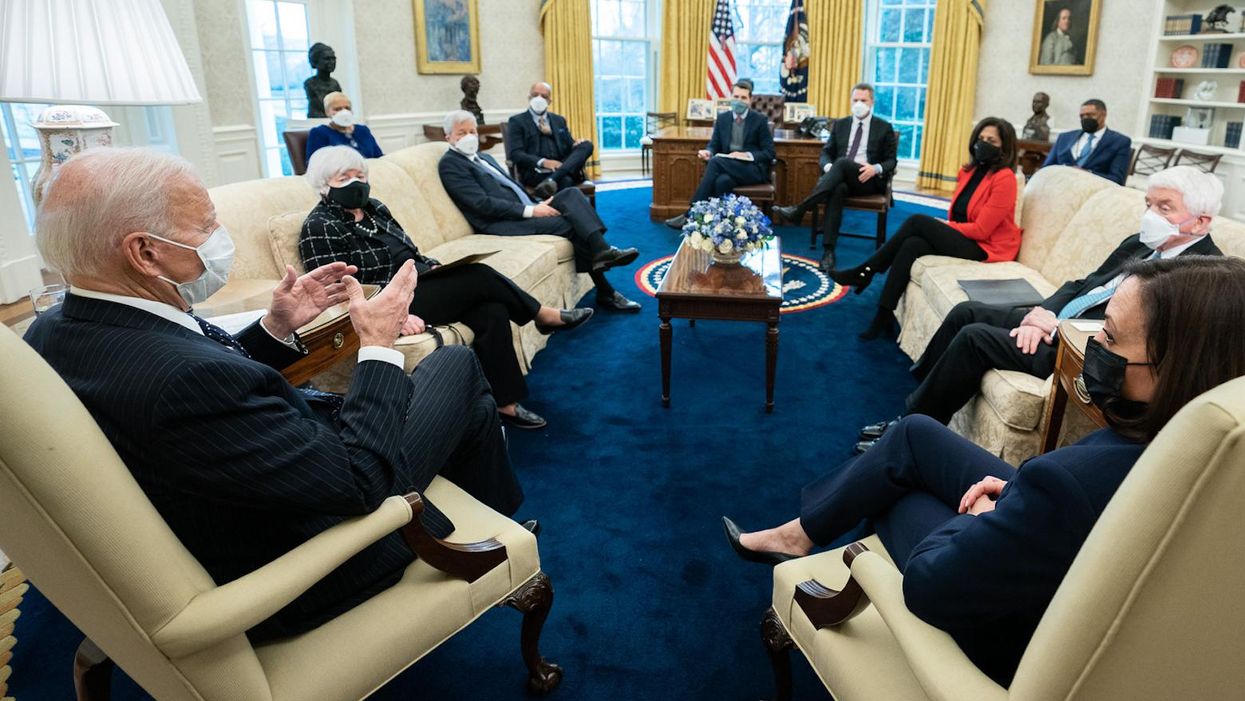 The House is expected to pass the $1.9 trillion COVID-19 relief bill by the end of the week, packed with things to help the nation recover from this pandemic, both literally with a massive vaccine plan and economically with financial support in the form of $1,400 survival checks, larger child tax credits paid monthly, more food assistance, and bumped up enhanced unemployment insurance (UI). But there's something absolutely critical that they've left out related to those unemployment benefits: tax relief for people who've spent the last year out of work and relying on UI to live. That assistance is taxable. According to the IRS, "Taxable benefits include any of the special unemployment compensation authorized under the Coronavirus Aid, Relief, and Economic Security (CARES) Act, enacted this spring."

Many probably weren't aware that they needed to have taxes withheld or make quarterly payments to avoid a penalty, or if they were aware, they decided they needed the benefits more. Trying to plan for this pandemic while not knowing how soon it would end and how soon everyone would get back to work has been impossible—the lack of leadership and clarity from the federal government in the last administration made it so. States are required to let applicants know that UI is taxable and are supposed to offer the option for the benefits offered through CARES Act programs, but not all did, according to a report from The Century Foundation. Congress and the Biden administration have to act now, in this relief bill, to prevent these surprise tax bills.

There were more than 18 million people unemployed and getting UI at the end of 2020, and an additional 5 million who exhausted their benefits before the end of the year. The Century Foundation argues that "there's a strong legal argument that, according to current law these benefit payments should never have been taxed in the first place," and their evidence is pretty damn compelling. "The Tax Code already excludes from income any payment from any 'Federal, State, or local government ... in connection with a qualified disaster in order to promote the general welfare.'" This pandemic has been declared a qualifying disaster and the benefits coming from federal and state governments are clearly the qualified source under the code.

There's legislation from Rep. Cindy Axne and Sen. Dick Durbin, both Democrats, that would exempt the first $10,200 of unemployment benefits in 2020 from taxation. The standard deduction of $12,400 for individuals and $24,800 for couple filing jointly would cover any additional tax liability, protecting people from getting these bills. The American Prospect's David Dayen talked to Axne about the legislation. "We have so many Americans that were on unemployment insurance last year. … I can't imagine the feeling that must give, to get a bill and not be able to pay for it." Dayen points out that Congress did this in the 2009 stimulus package, so it's not an unprecedented action. It could easily—and should—be included in the American Rescue Plan.

The Century Foundation estimates that "that fewer than 40 percent of UI payments in 2020 had taxes withheld," which means "there will be millions of families burdened by federal income tax bills." Those families are the most needy as well. The Census Household Pulse Survey found that around half the people who got UI between March and November of last year made less than $50,000 in 2019. "Due to their over-representation in the hardest hit sectors, stubborn levels of unemployment, and lengthy jobless spells, low-wage workers and workers of color are likely to have received high levels of unemployment insurance income." The legislation already recognizes that this is the population requiring the most economic relief, so it would be counterproductive to then stick these people with a tax bill. That might also have to come with additional funding to the IRS to implement the new policy and communicate the change to taxpayers. It would also have to deal with making adjustments and possible refunds to 2020 returns already filed, and would need the lead time and the resources to get that done.

The other alternative is administrative. Treasury Secretary Janet Yellen as the authority to direct the IRS to exempt UI from taxable income for 2020. The last administration had the option as well but decided to tax the benefits anyway, because the only tax breaks the Trump administration was interested in were those going to the very wealthy. It would be the humane—and smart—thing to do for the Biden administration.

It would also make the whole process simpler for Senate Democrats. The House has so far left it out of the package. Under the arcane budget reconciliation rules, Senate Democrats on the Finance Committee would have to find a way to cut some of the funding in its part of the bill as the UI tax is under its jurisdiction, to come up with the estimated $50 billion it would cost to lift this tax burden. But that would be $50 billion not going somewhere else it's needed, like to state, local, or tribal governments.

Yellen making the decision is the clearest, simplest way to do this, and it should be a no-brainer for Biden and for Democrats. A lot of good will and great press created by the economic boost people are going to get could quickly dissipate when the tax bill stories start hitting televisions. Those $1,400 survival checks will look particularly anemic if they're all swallowed up by the IRS.