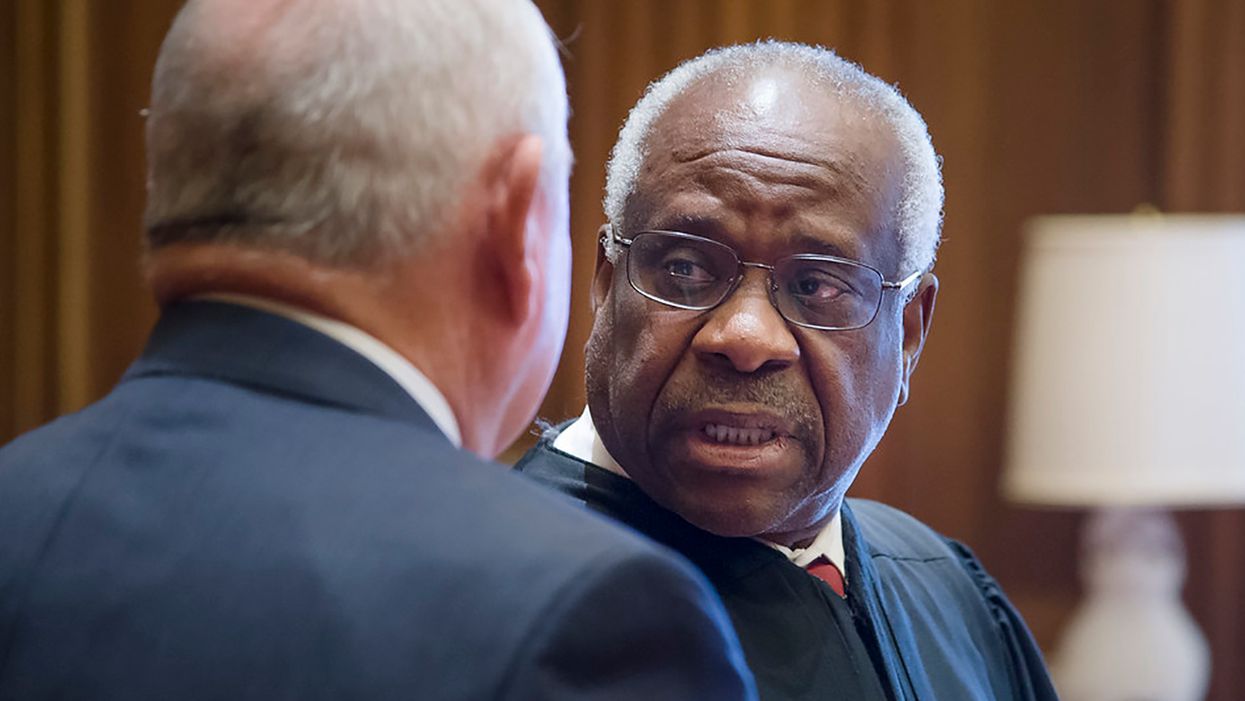 Sonny Perdue is sworn in as the 31st Secretary of Agriculture by U.S. Supreme Court Justice Clarence Thomas with his wife Mary and family April 25, 2017, at the Supreme Court in Washington, D.C.. Photo by Preston Keres
Alex Henderson
February 25, 2021

When the U.S. Supreme Court tossed out two pro-Trump lawsuits that were attempting to overturn the 2020 election results in Pennsylvania, Justice Clarence Thomas was a dissenter. Legal scholar Laurence Tribe, in an op-ed published by The Hill on February 24, explains why he finds Thomas' dissent so troubling.

Pennsylvania was among the five states that went to Donald Trump in the 2016 presidential election but went to now-President Joe Biden in 2020. Biden performed well in Democratic strongholds such as Pittsburgh and Philadelphia — where large crowds of people were literally dancing in the streets in response to Biden's victory — and Trump's performance in some GOP-friendly areas of Central Pennsylvania wasn't as strong as it had been in 2016. The authoritarian response of Trump and his attorneys was trying to overturn the will of the voters in the Keystone State and making bogus claims of widespread voter fraud.

"In a direct shot at the legitimacy of Joe Biden's election as our 46th president, Tribe explains, "Justice Clarence Thomas made clear that the 'Big Lie' about the 2020 election — a major source of institutional decay — has infected the Supreme Court, too. Thomas staked out his Trumpian position in a dissent from the Supreme Court's dismissal of two election-related lawsuits in Pennsylvania."

The legal scholar continues, "Republicans in Pennsylvania had asked the Supreme Court to answer a recurring question that plagued the 2020 election: Does the United States Constitution permit the members of a state legislature, acting as a gang of elected lawmakers unconstrained by the state's own constitution, to seize control of a presidential election by naming their own slate of electors to replace those chosen by the votes of the state's people?"

There is absolutely no proof that the Biden didn't win Pennsylvania fair and square, but that didn't stop pro-Trump attorneys from promoting the lie that Trump was the real winner in the Keystone State — and Thomas, according to Tribe, promoted that lie with his "solo dissent" in the two Pennsylvania cases.

"The question at hand concerned only the relationship between a state legislature and the state constitution as construed by the state's highest court," Tribe writes. "But Thomas seized the opportunity to rant against the nonexistent dangers of undetectable fraud and to suggest that the 2020 election — the most secure and reliable election in our nation's history — was clouded by uncertainty that only the U.S. Supreme Court could clarify."

According to Tribe, the far-right Thomas is attacking democracy itself when he refuses to honor democratic election results.

"Justice Thomas's opinion is particularly egregious because those most aggrieved can hardly speak up," Tribe writes. "Joe Biden's need to govern makes it counterproductive to engage in unending debate about the legitimacy of the 2020 election…. Justice Thomas's opinion is just the latest reminder that the Supreme Court too bears responsibility for avoiding the degradation of American democracy."