Biden wins big cheers with a major push for peace 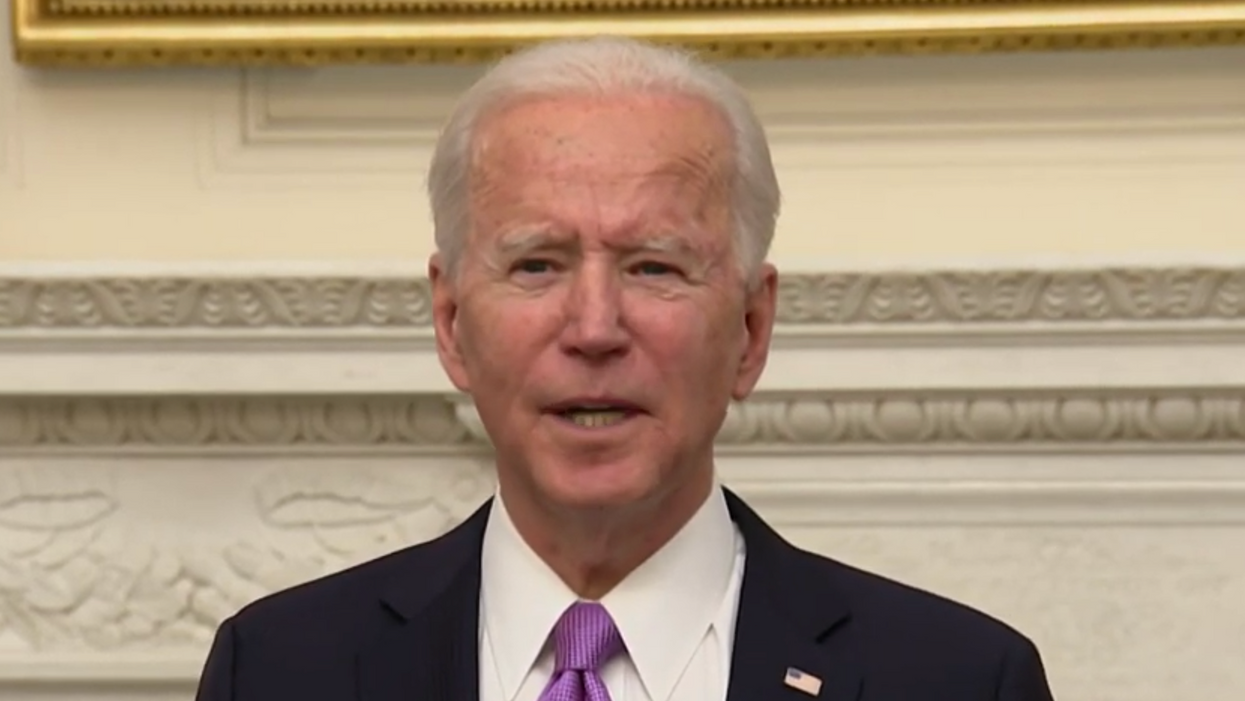 Peace advocates rejoiced on Thursday in the wake of President Joe Biden's announcement that his administration will be ending U.S. support for offensive operations in the Saudi-led war on Yemen and appointing a diplomatic envoy to help resolve the devastating conflict.

"This war has to end," Biden said during an address at the State Department. "And to underscore our commitment, we are ending all American support for offensive operations in the war in Yemen, including relevant arm sales."

Biden also named Timothy Lenderking as his special envoy to Yemen, saying the career foreign service officer will collaborate with the United Nations and "all parties to the conflict to push for a diplomatic resolution."

"It's about time that the U.S. end all complicity in the Saudi/UAE-led war on Yemen, with at least 100,000 dead and tens of millions on the brink of starvation," Paul Kawika Martin, senior director of policy and political affairs at Peace Action, said Thursday.

Danaka Katovich, Yemen campaign coordinator at the anti-war group CodePink, described Thursday as "a day peace activists around the world have been waiting for. On the campaign trail, President Biden said he would end support for the war in Yemen, and I hope he keeps that promise to the fullest extent."

As Medea Benjamin, CodePink's co-founder, pointed out on social media, White House national security adviser Jake Sullivan said the Biden administration's cessation of U.S. support for offensive operations in Yemen will include "an end to precision-guided munition sales," which have contributed to the massive civilian death toll.

While the Biden administration's "decision to stop U.S. support for 'offensive operations' by Saudi Arabia is critically important," said David Segal, co-founder and executive director of Demand Progress, "we must learn more about how 'offensive operations' are defined—and ensure that Biden's plans entail ending targeting support, spare parts transfers, and other logistical support, both known and unknown to the general public."

As for the White House's appointment of Lenderking, Martin said the new special envoy to Yemen "can push Saudi Arabia and the UAE to change its conduct and negotiate in good faith to end their war on Yemen and allow humanitarian aid to flow."

Martin added that Peace Action wants "to make sure the details include stopping all support and blocking all arms sales to Saudi Arabia and the UAE," a concern shared by Philippe Nassif, Amnesty International's advocacy director for the Middle East and North Africa.

"As the conflict in Yemen enters its seventh year, it is vital for the United States to commit to prioritizing the safety of civilians in the country," said Nassif. "Central to these efforts will be stopping the flow of arms from the United States into situations where they will be used to commit war crimes and grave human rights violations."

While "halting the sale of precision-guided munitions is the first big step," Nassif added, "the human tragedy of United States arms sales is immense pain and suffering inflicted on civilians in Yemen that must not be continued to be swept aside, and crimes committed with arms sold by the United States must be investigated."

Calling Biden's announcement a "historic win," peace activists at Just Foreign Policy (JFP) echoed those at Peace Action and Amnesty, emphasizing that "advocates will need to ensure that this includes all unconstitutional support for the war."

In a Twitter thread, Just Foreign Policy shared a timeline depicting six years of advocacy that began in early May 2015, just weeks after the U.S. joined the war.

As JFP explained, Reps. Ro Khanna (D-Calif.), Mark Pocan (D-Wis.), and Thomas Massie (R-Ky.) as well as former Rep. Walter Jones (R-N.C.) in October 2017 introduced the first War Powers Resolution that would require the U.S. to end its participation in the war in Yemen on constitutional grounds.

That measure was blocked by congressional leaders, but it led to a compromise resolution that acknowledged for the first time that U.S. support for the war on Yemen had never been authorized by Congress.

In December 2018, the Senate passed for the first time in its history a War Powers Resolution. The effort, led by Sens. Bernie Sanders (I-Vt.), Mike Lee (R-Utah), and Chris Murphy (D-Conn.), directed former President Donald Trump to end the country's participation in the war.

Khanna and Massie introduced another War Powers Resolution in the lower chamber as well, but then-House Speaker Paul Ryan (R-Wisc.) refused to allow a vote on the measure.

Nevertheless, Sanders and Khanna persisted, passing another War Powers Resolution through both chambers in April 2019. This time, Trump vetoed the measure, "with opposition inside the administration led by murderous extremists," including then-National Security Adviser John Bolton and then-Secretary of State Mike Pompeo, JFP noted.

In a statement released Thursday, Sanders called Biden's cessation of U.S. support for the Saudi-led war on Yemen and his naming of a diplomatic envoy "to help resolve this conflict and bring aid and reconstruction... a tribute to the work of so many activists over the years."

The senator added that "by honoring the bipartisan War Powers Resolution that the previous president vetoed, President Biden has shown a commitment to restoring authority over war where the framers of the U.S. Constitution placed it: with the Congress."

Pocan, one of the lawmakers who contributed to the effort to halt U.S. participation in the war, on Thursday tweeted: "This is a huge win—led by the work of the Congressional Progressive Caucus—demanding for years that America ends its complicity in the Saudi war in Yemen and the human rights disaster that has resulted."

Hassan El-Tayyab, legislative manager for Middle East policy at the Friends Committee on National Legislation (FCNL), called the Biden administration's decision "the result of years of activism from Yemeni Americans and grassroots activists all over the world. Congrats to lovers of peace everywhere who know #YemenCantWait."

CodePink's Benjamin hopes "Biden's announcement marks the beginning of the end of this horrific war."

"We will be closely following the activities of the new envoy Timothy Lenderking in negotiating a peace process," she said, "and will push the Biden administration to increase U.S. aid to help repair the damages caused by our devastating participation in this war."

To that end, Khanna, another leader in the fight, said in a statement that "in addition to ending U.S. military, logistics, and intelligence support for the Saudi coalition, the U.S. must cease involvement in the Saudi-led de-facto blockade of Yemen that has helped push millions of Yemenis to the brink of starvation."

"We should also swiftly and fully reverse the Trump administration's reckless designation of the Houthis as a foreign terrorist organization," the lawmaker added. "It's critical we ensure Yemeni civilians have access to the food, medicine, fuel, and other necessities on which they rely."