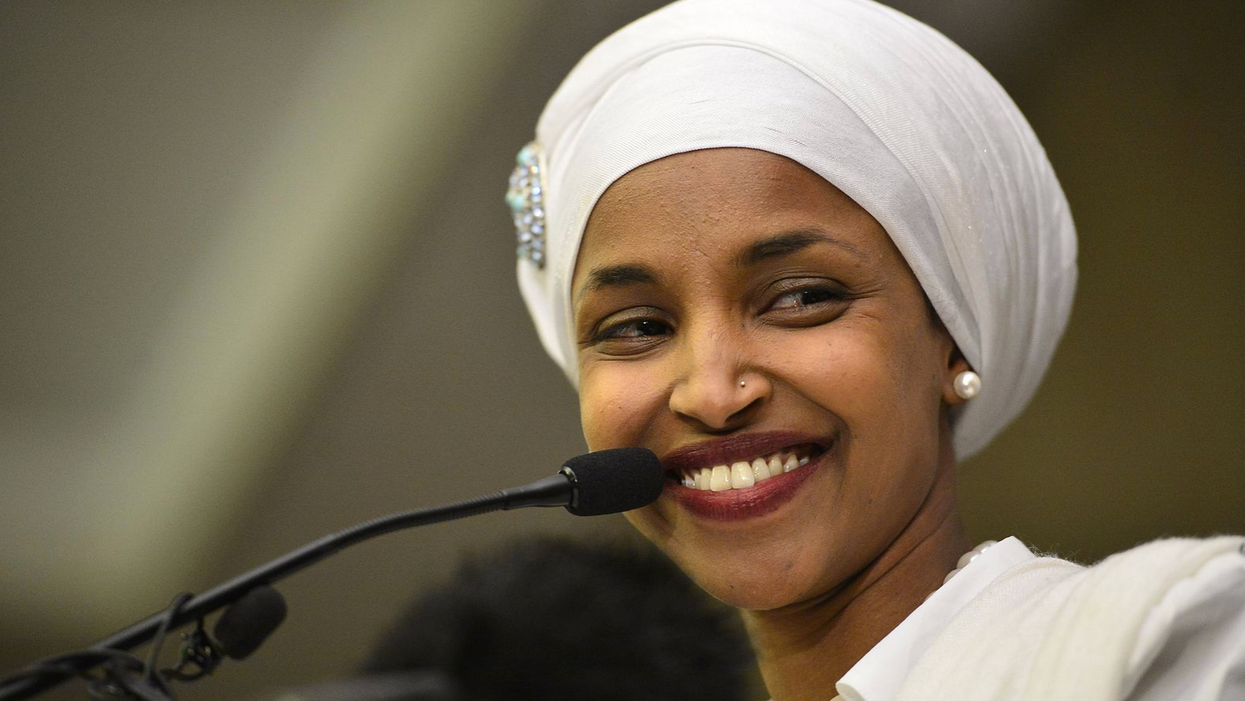 Imploring Democrats not to retreat in the face of mere advice from an unelected official, Congresswoman Ilhan Omar of Minnesota late Thursday urged her Senate colleagues to use their narrow majority to replace the chamber's parliamentarian and abolish the archaic 60-vote filibuster—two obstacles standing in the way a long-overdue minimum wage increase and other key relief measures.

"Abolish the filibuster. Replace the parliamentarian. What's a Democratic majority if we can't pass our priority bills? This is unacceptable," Omar tweeted after chief Senate parliamentarian Elizabeth MacDonough said a $15 minimum wage provision violates the rules of budget reconciliation, the filibuster-proof process Democrats are using to pass coronavirus relief without Republican support.

While MacDonough's advice was presented as a crushing and even fatal blow to the effort to gradually raise the federal minimum wage to $15 through reconciliation, Omar and other progressive lawmakers stressed that the parliamentarian's opinion is in no way binding and should be overruled by Vice President Kamala Harris, the presiding officer of the Senate.

"Republicans go for their agenda and don't let anyone stand in their way as they fight for corporations over people," Omar said Thursday night, pointing to the GOP's 2001 firing of the Senate parliamentarian for endangering then-President George Bush's tax cuts for the wealthy.

Abolish the filibuster. Replace the parliamentarian. What’s a Democratic majority if we can’t pass our priority b… https://t.co/5KVuiQWcSk
— Ilhan Omar (@Ilhan Omar) 1614303407.0

After days of behind-the-scenes arguments and tense anticipation, MacDonough on Thursday sided with the Republican senators who insisted that the budgetary impact of the proposed minimum wage increase would be "merely incidental," violating Senate rules requiring that all reconciliation provisions have a direct impact on federal spending and revenue.

Sen. Bernie Sanders (I-Vt.), chairman of the Senate Budget Committee, was among the chorus of lawmakers voicing their profound disagreement with the parliamentarian's advice, which runs counter to two recent Congressional Budget Office analyses showing the wage hike would have a substantial impact on the federal budget.

But the Biden White House signaled once again Thursday night that Harris would not be willing to disregard the parliamentarian's advice, despite the official's lack of any real authority. In a statement, White House Press Secretary Jen Psaki said that while the president is "disappointed in this outcome," he "respects the parliamentarian's decision and the Senate's process."

On Friday, the House of Representatives—which does not have to contend with the Senate's Byrd Rule—is expected to pass a version of the pending $1.9 trillion coronavirus relief legislation that includes the $15 federal minimum wage provision, which has broad support among the U.S. electorate. For the relief measure to become law, the House and Senate must pass identical legislation.

"House Democrats believe that the minimum wage hike is necessary," House Speaker Nancy Pelosi (D-Calif.) said in a statement late Thursday. "Therefore, this provision will remain in the American Rescue Plan on the floor tomorrow. Democrats in the House are determined to pursue every possible path in the Fight for 15."

Rep. Pramila Jayapal (D-Wash.), chair of the Congressional Progressive Caucus—which was instrumental in securing the wage hike in the House relief package—said the White House and Senate cannot allow the parliamentarian's advice to prevent inclusion of the wage increase in the final aid legislation.

"The White House and Senate leadership can and should still include the minimum wage increase in the bill," Jayapal said. "The ruling only makes it more clear than ever that the Senate must reform its archaic rules, including reforming the filibuster to allow populist and necessary policies like the $15 minimum wage to pass with a majority of the Senate."

Senate Democrats' refusal to abolish or significantly alter the 60-vote legislative filibuster is what forced the party to use the severely limited reconciliation process—which frequently results in poorly designed and badly inadequate bills—to move coronavirus relief amid obstruction from the Republican minority. The filibuster can be eliminated with a simple-majority vote, but Sens. Joe Manchin (D-W.Va.) and Kyrsten Sinema (D-Ariz.) are opposed to the move.

Rahna Epting, executive director of MoveOn, said Thursday that "an unelected parliamentarian shouldn't be able to decide if 32 million Americans get a long-overdue pay raise or not."

"Nor should Mitch McConnell and Senate Republicans, who have stood in the way of this needed raise for years. We need a $15 minimum wage in this country and we need it now," Epting added. "It is long past time that Senate Democrats eliminate the filibuster and do what they were elected to—deliver bold solutions to address this nation's problems. The American public can not afford more obstruction or half measures."