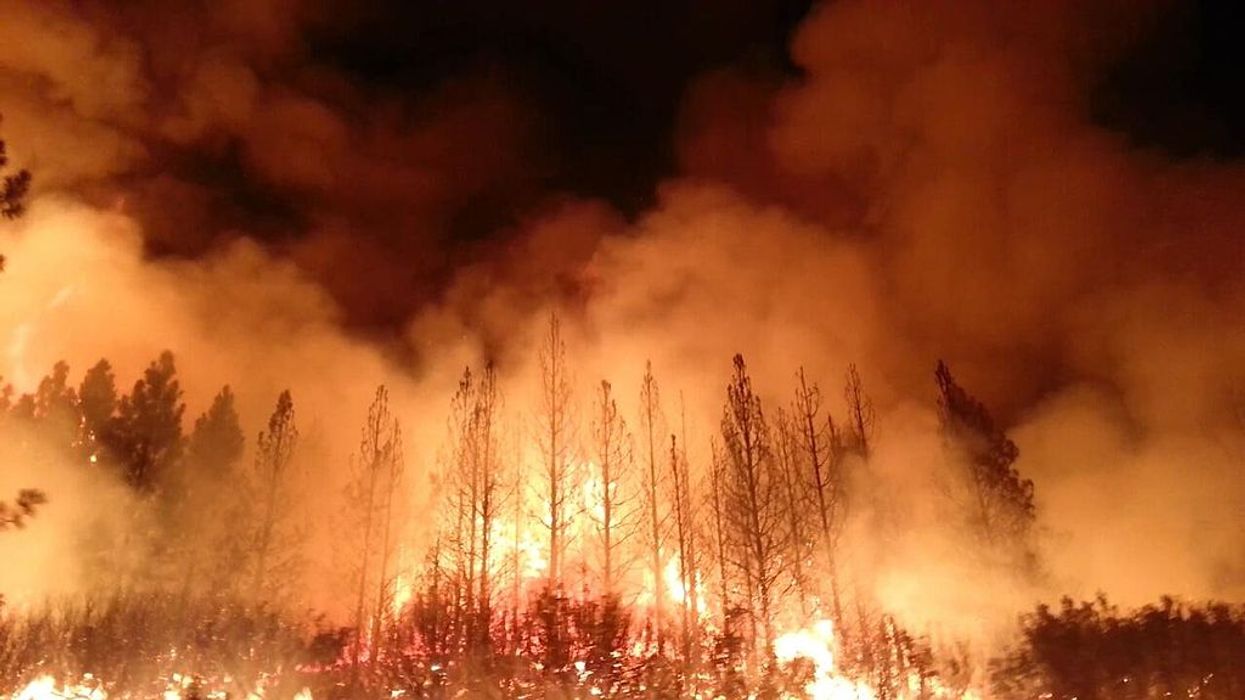 The Rim Fire in the Stanislaus National Forest near in California began on Aug. 17, 2013 and is under investigation. The fire has consumed approximately 149, 780 acres and is 15% contained. U.S. Forest Service photo.
Jessica Corbett
and
Common Dreams
February 28, 2021

A United Nations report out Friday reveals just how far off the world is from meeting the goals of the Paris climate agreement based on the emissions reduction plans that governments across the globe have put forth for the next decade.

The Paris agreement aims to limit global temperature rise this century to "well below" 2°C, and preferably 1.5°C, compared with pre-industrial levels. Scientists warn accomplishing its more ambitious target requires cutting planet-heating emissions 45% by 2030 from 2010 levels. The new report from U.N. Climate Change shows that if recent pledges were implemented, emissions would only drop 1%.

The initial NDC Synthesis Report focuses on nationally determined contributions (NDCs) that parties to the agreement have released ahead of COP26, a summit in Glasgow now scheduled for November, after being postponed due to the coronavirus pandemic. The report only accounts for countries' submissions through the end of last year, detailing the cumulative impact of new or updated pledges from 75 parties representing approximately 30% of global greenhouse gas (GHG) emissions.

Although the world is awaiting additional updates from major emitters including India and the United States—which just rejoined the Paris agreement under President Joe Biden—experts and climate campaigners still responded to the U.N.'s findings with alarm and calls to action.

"It's staggering how far off track countries are to dealing with the climate crisis," said Mohamed Adow, director of Power Shift Africa. "If you would believe the rhetoric of world leaders you'd think they were making great progress and about to solve it. This is why it's good to have a report that lays out the facts in stark reality."

Oxfam's global climate policy lead, Nafkote Dabi, called the U.N.'s findings "appalling." While experts have long warned that even a 1.5°C temperature rise will affect people worldwide, she emphasized that greater efforts are needed to at least meet that target and "avoid disastrous impacts on vulnerable communities."

"The U.S., Canada, and China—accounting together to over a third of total global emissions—are yet to submit their revised climate plans, while Australia did not bother to revise theirs, and Brazil did not increase their ambitions to cut emissions," Dabi said. "Even the E.U.'s revised target to reduce emissions from 40% to 55%, is still far below their owed 65% reduction fair share to limit global warming. This is irresponsible."

Criticism also came from campaigners in those countries—including Marcio Astrini, executive secretary of the Observatório do Clima, who said that "Brazil's updated NDC is a trainwreck of reduced ambition."

Julie-Anne Richards, executive director of Climate Action Network Australia, slammed the Morrison government in her country for "steadfastly refus[ing] to increase Australia's grossly inadequate 2030 target and put in place serious plans, instead continuing to favor fossil fuels and subsidize the gas industry under the guise of Covid-19 recovery."

Agnes Hall, global campaigns director at 350.org, described the new report as "extremely disappointing." She too called out Australia and Brazil as well as Japan and South Korea for submitting "sub-standard" pledges, and called on their leaders to "wake up and come back with better plans by COP26." She also urging the U.S., China, Canada, and other big polluters to "step up" and submit their plans.

We need a just recovery from the global health pandemic, ensuring that the solutions to the economic crisis caused by Covid-19 must also be the solutions to the climate crisis. A just recovery means rebuilding our economy in a way that works for the many, not just the already-wealthy few. It means guaranteeing universal access to healthcare, education, and a clean environment as basic human rights. It means creating millions of good-paying jobs in industries that don't hurt the environment and don't pollute our communities. It means stopping funding fossil fuels and equitable solutions to the climate crisis so that no member of our society will be forgotten or unjustly bear the costs of climate change.

Dubbing the report "a red alert for our planet," he declared that "2021 is a make or break year to confront the global climate emergency."

"The global coalition committed to net-zero emissions by 2050 is growing, across governments, businesses, investors, cities, regions, and civil society," he said, urging major emitters to step up before the Glasgow meeting. "Decision makers must walk the talk. Long-term commitments must be matched by immediate actions to launch the decade of transformation that people and planet so desperately need."

While acknowledging "the recent political shift in momentum towards stronger climate action throughout the world" and that the new findings provide "snapshot, not a full picture," Patricia Espinosa, executive secretary of U.N. Climate Change, said that the report "underlines why COP26 must be the moment when we get on track towards a green, clean, healthy and prosperous world."

Incoming COP26 president Alok Sharma echoed that the report should serve as a call to action and the demand that major emitters urgently submit and enact ambitious plans to slash emissions, warning that "we must recognize that the window for action to safeguard our planet is closing fast."