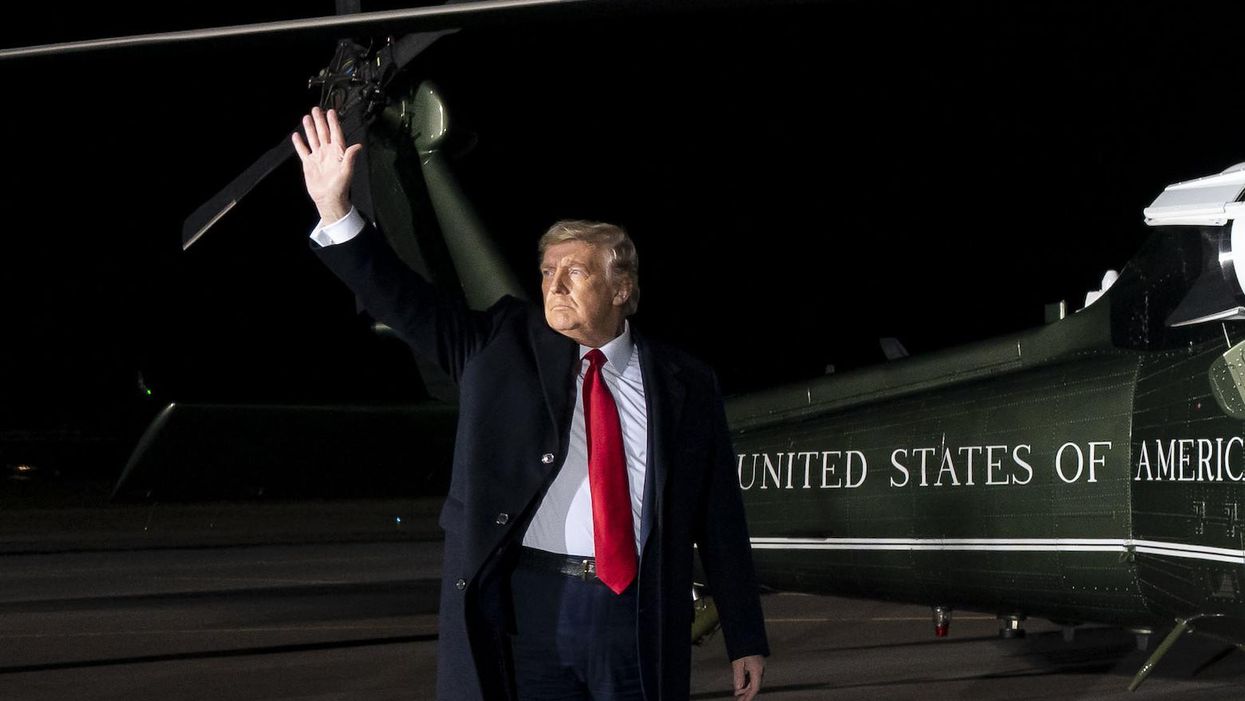 Trump faces calls for his immediate impeachment as his supporters launch insurrection on the U.S. Capitol
President Donald J. Trump waves as he prepares to board Marine One at Dalton Municipal Airport in Dalton, Ga., Tuesday, Jan. 4, 2021, after addressing a rally at the airport. (Official White House Photo by Tia Dufour)
John Stoehr
January 07, 2021

At the end of yesterday's edition of the Editorial Board, I said you should not expect the Republicans to change. They lost the White House. They have now lost the US Senate. But they won't do any soul-searching. They won't pull back from the brink. They will do what they were elected to do. They will represent a wholly imagined nation-within-a-nation, a confederacy of the mind and spirit where "real Americans" live and where anyone who is not a Republican is, no proof required, the "enemy of the people."

As I pressed the publish button, an enraged mob broke off from a massive rally in Washington in support of Donald Trump on the day the US Congress was set to tally electoral votes showing Joe Biden to be the next president. Under Trump's explicit direction, the mob lay siege to the Capitol. They broke windows, smashed doors, ransacked offices, and generally overran security. Guns were drawn. Police fired teargas. A woman was shot and killed. Lawmakers were rushed away, provided with gas masks. The most striking images from ground zero were those of rioters waving flags honoring the old Confederacy. Cory Booker, a Senate Democrat, later connected those dots. That flag represents old political forces that nearly brought down the republic. That flag represents new political forces that are trying to do it again.

Legislators reconvened in the evening. They finished the job about 3 this morning. But as I watched the Post's coverage, I sensed from reporters speaking that the tone in Washington had changed. I was told the Republicans were chastened by displays of real violence, real blood, and real tragedy. But even as reporters spoke, even as some Republican senators pulled back, the rest of their party put the lie to such happy talk.

Representative Andy Harris nearly started a fistfight after Conor Lamb, a Democrat, said the attack "didn't materialize out of nowhere. It was inspired by lies—the same lies you're hearing in this room tonight." "He called me a liar," Harris was heard saying. He'd have come to blows had aides not stepped in. Political violence on the outside of "democracy's temple" was paired with political violence on the inside.

Pre-putsch, it was possible to see attempts by the Republicans to overthrow the election as familiar Washington theater. The Democrats control the House. Mitch McConnell, the Senate majority leader, is in no more mood for Trump. All of this is sturm und drang. Nothing to be worried about. If something serious happened, they'd surely check themselves. Politics is one thing, after all. Real life is something else.

They declared where they stand—against the Union and for a confederacy of the mind and spirit. Through it all, they repeated the same lies, the same propaganda and the same venom that fueled insurgents storming the Capitol, leading to a woman's death. The Republicans were not chastened. They were not humbled. They were inspired.

The only way for the Republicans to change is to break them. We have the first steps. Take the presidency. Take the Senate. But the Democrats can't, and apparently won't, stop there. Biden called the putsch an "insurrection." In short order, respectable white people were following suit, even McConnell. The Post used the word without quotes. (So did public radio's "Marketplace," of all things.) Chuck Schumer, the next Senate majority leader, stepped past "insurrection" to call Trump's mob "domestic terrorists." All of this pushed Twitter to lock Trump's account temporarily. Facebook banned him indefinitely. White House attorneys reportedly warned aides they could be tried for treason if they go along with Trump. His Cabinet is reportedly discussing invoking the 25th Amendment. Polite white society seems to be universally appalled, and scared.

It should be. But is it scared enough? Trump really is the leader of an insurgency whose participants are armed, paranoid, dangerous and deadly. Some on the inside of the GOP—Hawley, Cruz, Republicans in the House, et al.—really are working in tandem, or in coordination, with an illegitimate movement seeking to replace our nation with a wholly imagined confederate nation within our nation, one where "real Americans" live and anyone who opposes Donald Trump is "the enemy of the people."

He's going to be president for the next two weeks. A long two weeks. "What happened at the US Capitol yesterday was an insurrection against the United States, incited by the president," Schumer said today. "This president should not hold office one day longer. If the Vice President and the Cabinet refuse to stand up, Congress should reconvene to impeach the president." How scared is polite white society?

We're about to find out.