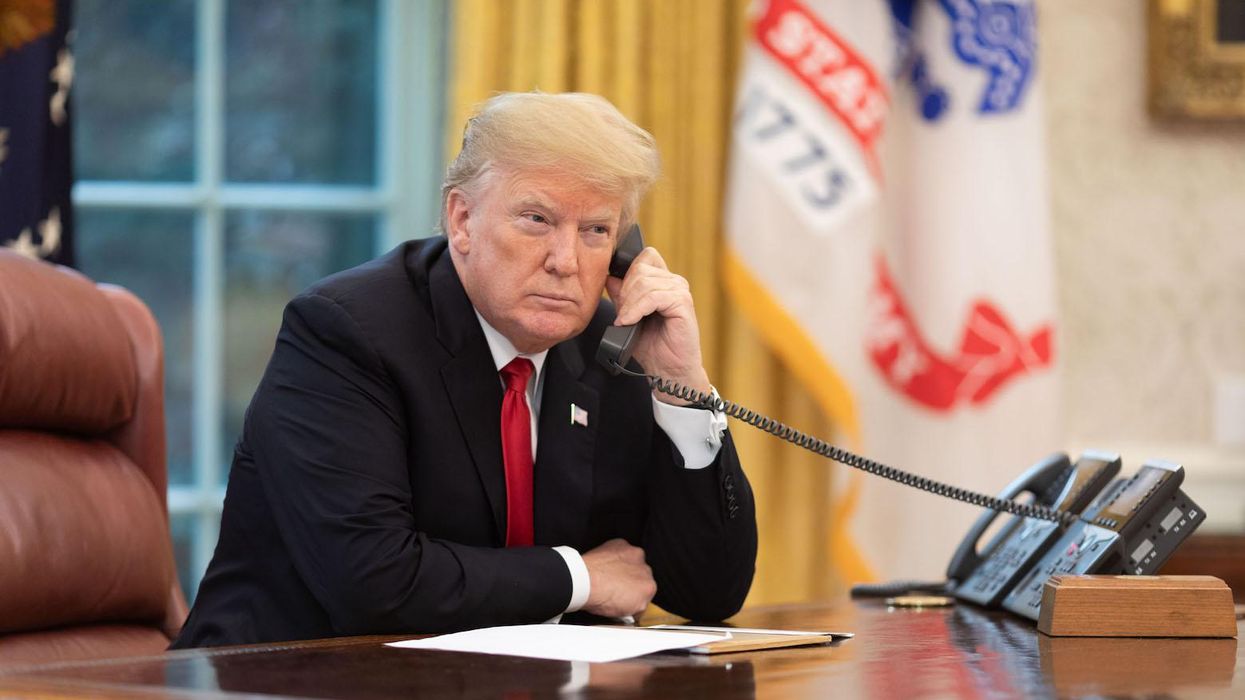 Donald Trump's behavior is imminently dangerous to the health and safety of all Americans and to democracy. Despite losing the 2020 election, he has been fighting relentlessly to stay in power.

He has called for a protest in DC on Wednesday (Jan. 6), promising it will be "wild", to which the misogynist and violent "Proud Boys" responded. His conspiracy-mongering has enlisted 140 Republican representatives to plot to overturn the election by getting Congress to contest the validity of votes that are unfavorable to him, while Sen.Ted Cruz (R-Texas) has recruited at least 11 other senators to delay election ratification by 10 days, opening room for further disruption and upheaval.

Meanwhile, there have been warnings that Trump could invoke the Insurrection Act at any sign of discord in the streets, or begin a war with Iran to interrupt the inauguration.

On Sunday, the Washington Post released a recording of Trump's hour-long call to Brad Raffensperger, Georgia's secretary of state overseeing elections, first to berate, bully, and beg him into changing the vote totals, and then to threaten him when he refused. The full recording reveals the president to be highly irrational and unstable, confirming better than any interview our previous assessment of lack of capacity for rational decision-making, but above all showing the president to be highly symptomatic and dangerous. Here are some of our alarming findings.

A person who cannot tolerate certain realities may use various conscious and unconscious methods of minimizing those disturbing feelings by trying to change reality in their minds. At the extreme end of this continuum, emotionally fragile persons can rely on delusions, or false beliefs that are rigidly fixed in order to support a vitally-needed belief, such as in their superior value. Not only are these beliefs unamenable to facts and evidence, but they may bring a need to control what other people believe and say in order to ensure that the unbearable reality does not upset them. Here are some examples:

The presence of delusions does not negate criminal intent. Donald Trump appears rather to rely on and maintain them interpersonally, by using denial, dismissal, contempt, ridicule, domination, invalidation, belittling, ignoring, and psychological annihilation to advance his agendas and to control others. His inability to hear anything that threatens his ability to feel good about himself pressures others to comply, and his actual conviction makes his false beliefs more persuasive. Psychic annihilation of others implies that others believe what he believes, and may: tell others what they know or do not know; or entirely discredit and bulldoze over the perceptions of other people as if to implant his reality inside their minds.

Donald Trump's emotional vulnerability relentlessly drives him to force external reality to conform to his internal reality—in this case, that he won the state of Georgia and also the election. The need to assert this belief is evident in the phone call to Georgia Secretary of State Brad Raffensperger in several ways: Donald Trump dominates the hour-long conversation, repeatedly asserting on Raffensperger his fixed false belief that he won the election. He tries to annihilate the other person's independent perceptions by assuming a kind of ownership over them. He projects his feelings onto him and fails to differentiate between himself and "the state." Failure of differentiation manifests in ascribing to others one's own thoughts, feelings, or motives, failing to recognize the difference between what he feels and what others feel, conflating his feelings and the needs of "the state," or "the people." This facilitates narcissistic entitlement, which Donald Trump also displays, assuming that he should be able to get whatever he wants if he simply lets it be known and applies the right kind of pressure.

Donald Trump also refuses to acknowledge the legitimacy of any statement of fact that threatens his false beliefs. On the one hand, he must dominate in order not to have to hear information that in any way disconfirms the reality he needs to believe. On the other hand, any spreading of hearsay, childlike conclusions, fantasies, cajoling, or attempts to humiliate, intimidate, and threaten are acceptable.

Raffensperger: Mr. President, they did not put that. We did an audit of that, we proved conclusively that they were not scanned three times.

Trump: (Changing the subject) Where was everybody else at that late time in the morning?

Raffensperger: Mr. President, we'll send you the link from WSB.

Trump: I don't care about the link. I don't need it.

Trump: Dominion [Voting Systems] is really moving fast to get rid of their, uh, machinery. Do you know anything about that? Because that's illegal, right?

Ryan Germany (lawyer for Raffensperger, on the phone call): No, Dominion has not moved any machinery out of Fulton County.

Trump: But have they moved the inner parts of the machines and replaced them with other parts?

Trump: Are you sure, Ryan?

Trump: Have they been shredding ballots?

Ryan Germany: They have not been shredding any ballots.

Raffensperger: Mr. President, the problem you have with social media, they—people can say anything.

Trump: Oh, this isn't social media. This is Trump media…. Social media is Big Tech. Big Tech is on your side, you know. I don't even know why you have a side because you should want to have an accurate election.

Raffensperger: We believe that we do have an accurate election.

Trump: We won Georgia easily. We won it by hundreds of thousands of votes.

Ryan Germany: Well, that's not the case, sir. There are things that under law we are not allowed to give out.

Incapacity to discharge the duties of office does not equal incapacity to stand trial or exemption from criminal responsibility. Rather, the presence of mental impairment may contribute to how dangerous a person is, and in the context of unfettered authority to launch nuclear weapons at any time for any reason, this is a serious issue.

We as a nation need to ask ourselves: Does it matter if the President of the United States is delusional? Do we care if the poor functioning of a president's mind adversely affects the ability of the people who keep our democratic institutions to function ethically, morally, and in keeping with the Constitution? Should we be concerned about the influence the mental condition of those in power has on the population, and how their decisions affect us?

And what are our limits? How long do we look away from a person who, in every other situation, would be deemed a danger to himself, others, and the public and be evaluated under an involuntary mental health hold—just because he is president? How far do we subordinate our safety, the nation's survival, and the wellbeing of all society to the privilege of one person?

Madeline Taylor, Ph.D., is a member of the World Mental Health Coalition (worldmhc.org) and a licensed marriage and family therapist residing in Los Angeles. She has a petition for the public, approved by Dr. Lee.