Republican Sen. Tom Cotton
‘Don’t fall for it’: Arizona congressman and former Marine who 'gets the same intel' as Tom Cotton warns some GOPers are 'exaggerating' the Iran threat
Roger Sollenberger
and
Salon
January 23, 2021 Push Notification

Sen. Tom Cotton of Arkansas has accrued a resume tailor-made for a Republican politician: He leapt from a small-town Arkansas cattle farm to Harvard University and then Harvard Law School; he left a leading New York firm to join the military after George W. Bush's re-election; he was discharged after nearly eight years and two war-zone deployments as an Army captain and decorated hero — including two commendation medals, a Bronze Star and a Ranger tab.

But when Cotton launched his first congressional campaign in 2012, he felt compelled to repeatedly falsify that honorable military record, even as he still served in the Army Reserve.

In his first run for Congress, Cotton leaned heavily on his military service, claiming to have been "a U.S. Army Ranger in Iraq and Afghanistan," and, in a campaign ad, to have "volunteered to be an Army Ranger." In reality, Cotton was never part of the 75th Ranger Regiment, the elite unit that plans and conducts joint special military operations as part of the U.S. Army Special Operations Command.

Rather, Cotton attended the Ranger School, a two-month-long, small-unit tactical infantry course that literally anyone in the military is eligible attend. Soldiers who complete the course earn the right to wear the Ranger tab — a small arch that reads "Ranger" — but in the eyes of the military, that does not make them an actual Army Ranger.

Yet Cotton told the Hot Springs Sentinel-Record in February 2012: "My experience as a U.S. Army Ranger in Iraq and Afghanistan and my experience in business will put me in very good condition." The year before, he told Roby Brock of Talk Politics in a video interview that he "became an infantry officer and an Army Ranger." A Cotton campaign ad placed in the Madison County Record in May 2012 identifies Cotton as a "Battle-Tested Leader" who "Volunteered to be an Army Ranger." 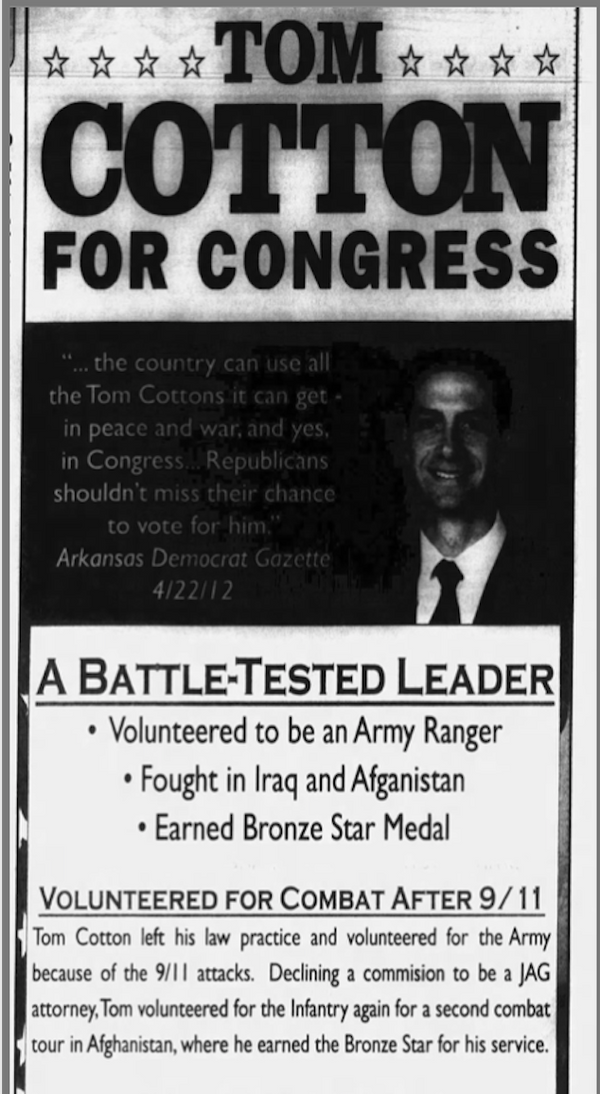 Reached for comment, Cotton spokesperson Caroline Tabler told Salon in an email, "Senator Cotton graduated from Ranger school and is more of a Ranger than a Salon reporter like you will ever be." (It is not immediately clear whether Tabler herself is a Ranger, or whether she graduated from Ranger school. Further, Tabler, a spokesperson for Cotton's Senate office, copied the office's chief of staff, Doug Coutts, on the email, but to a Cotton campaign address; senate offices may not coordinate with campaigns. Tabler asked to arrange an off-the-record call in that email; Salon declined, citing the unfavorable terms.)

It isn't a minor or insignificant distinction. Last summer, Washington Post fact-checker Glenn Kessler addressed it during New Hampshire's Republican Senate primary, which featured two Ranger School alums: Colorado lawyer Bryant "Corky" Messner, and retired Brig. Gen. Don Bolduc. Messner claimed repeatedly that he was a Ranger; Bolduc did not make such claims, and called out his opponent over it.

The Ranger Regiment is considered the Army's top action unit, and over the course of the so-called War on Terror, Rangers have killed or captured more high-value targets than any other unit. The regiment comprises four battalions, and members wear distinctive tan berets as well as a red, white and black Ranger "Scroll," a cloth badge distinct from the black-and-gold tab that Cotton earned at Ranger School. Attending the school, in fact, is not a prerequisite to serve in the Ranger Regiment.

When Kessler asked the Army to evaluate Messner's claim, a Special Operations Command spokesperson made a distinction: Ranger qualified vs. an Army Ranger.

Messner told the Post that his claim had never been closely examined until he ran for Senate, and provided five statements from retired officers saying that anyone who graduated from the school had the right to call themselves a Ranger. Kessler went to the retired colonel who headed the Ranger School between 2014 and 2016, who said the difference was indeed a matter of debate, but concluded: "Should [Messner] say he was 'Ranger-qualified' in his ads? Probably. Maybe."

Kessler described Messner's phrasing — "Corky became an Army Ranger, serving abroad guarding the Berlin Wall during the Cold War" — as "especially problematic." Some of Cotton's claims appear to go even further, especially when describing his "experience as a U.S. Army Ranger in Iraq and Afghanistan."

Kessler gave Messner two "Pinocchios," the Post's measure of falsehood. Cotton, who in a fiercely criticized New York Times op-ed last summer advocated for calling in the military to put down Black Lives Matter protests, deserves at least as much.