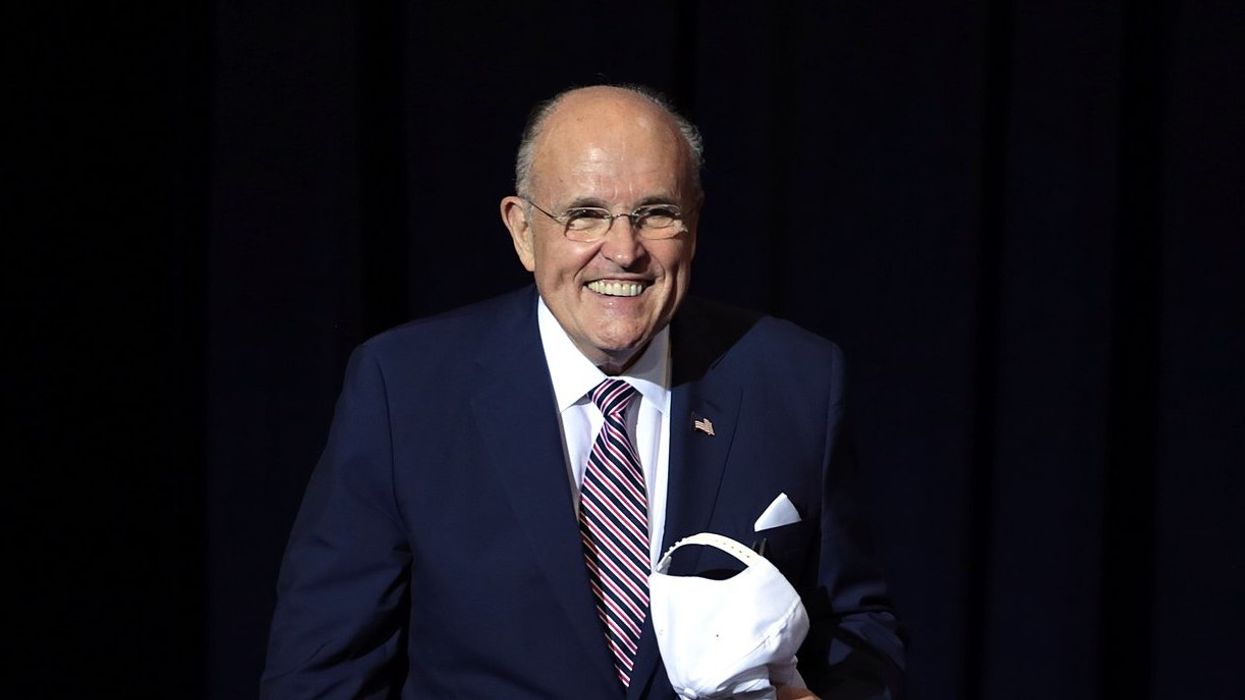 On Monday, the U.S. Treasury Department placed sanctions on seven foreign members of Rudy Giuliani's inner circle who sought to interfere in the U.S. election and sway the results in Trump's favor. The president has also reportedly dropped his reliance on Giuliani for his second impeachment trial, refusing to pay Giuliani for his unsuccessful post-election campaign to overturn November's results. Meanwhile, the New York State Bar Association has moved to disbar Giuliani this week. Needless to say, the week after he told thousands of Trump supporters to hold "trial by combat" before many of them violently stormed the U.S. Capitol with aims to halt the Constitutionally mandated certification of Joe Biden's Electoral College victory was a terrible, horrible, no good, very bad week for Rudy Giuliani.

The Treasury's targets include Russian-linked Ukrainians Konstantin Kulyk, Oleksandr Onyshchenko, Andriy Telizhenko, Oleksandr Dubinsky, and –– most principally –– Andrii Derkach, a Ukrainian lawmaker sanctioned just last year, who played a key role in orchestrating the Biden-Ukraine conspiracy theory. It was with the help of these actors that Giuliani spearheaded a failed campaign to smear President-elect Joe Biden's son, Hunter Biden, with false claims of past corruption. Trump's call to Ukrainian President Vladimir Zelensky –– in which the President pressured Zelensky to investigate Hunter Biden on his behalf –– would become the impetus for the President's own impeachment.

"Since at least 2019," said the Treasury in a statement on Wednesday, "Derkach and his associates have leveraged U.S. media, U.S.-based social media platforms, and influential U.S. persons to spread misleading and unsubstantiated allegations that current and former U.S. officials engaged in corruption, money laundering, and unlawful political influence in Ukraine."

Treasury Secretary Steven Mnuchin, a steadfast Trump loyalist, also attempted to add distance between his agency and Giuliani and his goons. "Russian disinformation campaigns targeting American citizens are a threat to our democracy [...] The United States will continue to aggressively defend the integrity of our election systems and processes."

"Trump has been blaming his longtime personal attorney and many others for the predicament he now finds himself in, though he has not accepted any responsibility in public or in private," CNN reported this week. "Giuliani is still expected to play a role in Trump's impeachment defense but has been left out of most conversations thus far."

The New York State Bar Association has also made moves to disavow Giuliani in light of last Wednesday's chaos. The Bar announced on Monday that it has launched an inquiry into Giuliani's role in Trump's months-long crusade to undermine the election. The group's bylaws make explicit reference to anyone "who advocates the overthrow of the government of the United States, or of any state, territory or possession thereof, or of any political subdivision therein, by force or other illegal means" and disowns anyone who has engaged in such activity.

The Association stated, "Mr. Giuliani's words quite clearly were intended to encourage Trump supporters unhappy with the election's outcome to take matters into their own hands," adding, "Their subsequent attack on the Capitol was nothing short of an attempted coup, intended to prevent the peaceful transition of power."

Giuliani, who called for "a trial by combat" in the rally leading up the riot on Capitol Hill, now faces the threat of permanent expulsion from the Bar, which would render him unlicensed to practice law in the state of New York. "We cannot stand idly by," said the Association, "and allow those intent on rending the fabric of our democracy to go unchecked."