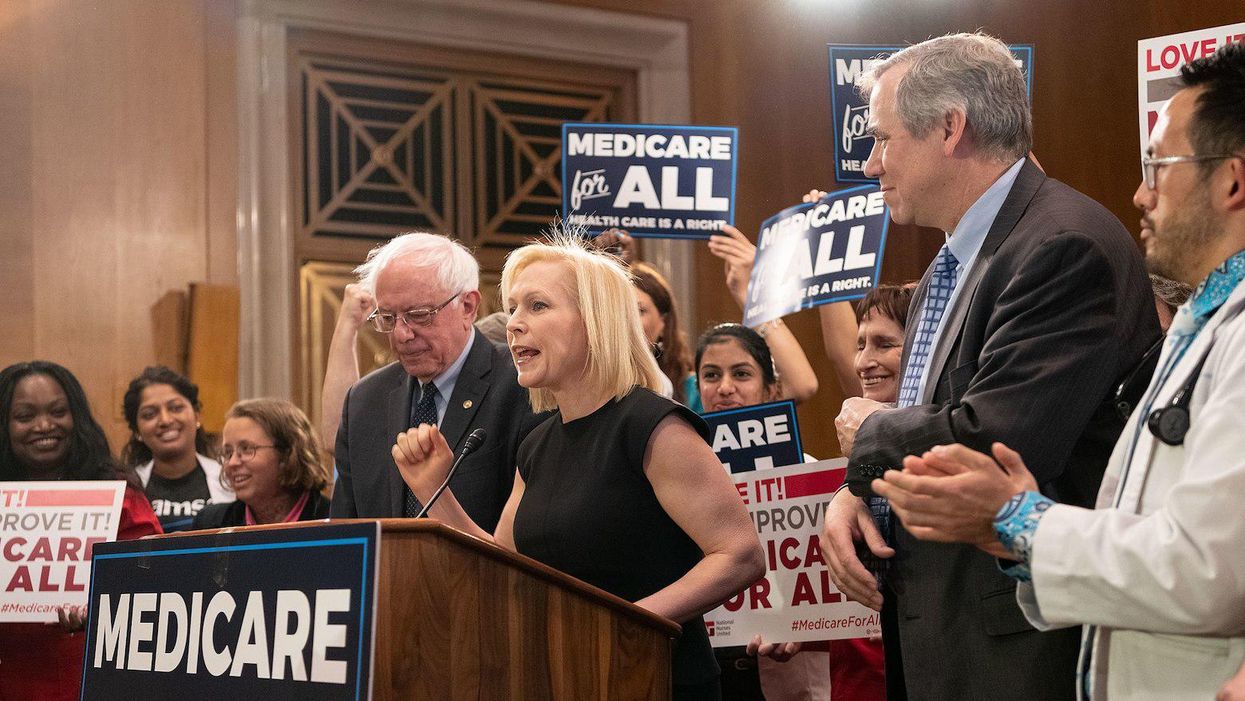 With the Covid-19 pandemic raging and recognition of the inadequacy and injustice of America's for-profit healthcare system at a possible zenith, a new study released Tuesday reveals that projections of large and costly usage increases under a single-payer program have been overstated, bolstering the case that Medicare for All would save both lives and money.

In a paper published Tuesday in Health Affairs, Drs. Adam Gaffney, David Himmelstein, and Steffie Woolhander of Cambridge Health Alliance/Harvard Medical School and James Kahn of the University of California San Francisco—all associated with Physicians for a National Health Program, which advocates for Medicare for All—analyze the relationship between universal healthcare and the use of medical services.

What the researchers find is that most estimates of the effect of universal coverage expansion on healthcare utilization are overblown, adding to a growing consensus that Medicare for All is less costly than previously thought due to lower administrative costs and usage rates that increase only slightly or not at all.

The authors anticipate that "debate over public coverage expansion and its costs" is likely to grow as a result of the pandemic's exposure of the problems with employment-based insurance and the return of a Democratic administration to the White House.

While demand for medical services is elastic, meaning that "people use more healthcare when the price they pay is lower and less care when prices rise," the authors contend that prior research documenting the effect of coverage expansions on healthcare use and costs have underestimated the impact of "supply-side constraints."

Although the number of physicians and hospital beds is malleable in the long-run, current limitations on supply can provoke a reduction in the provision of low-value services and yield a more egalitarian prioritization of care, the authors say.

As Dr. Gaffney explained in a statement Tuesday, "Our findings clash with the traditional economic teaching: that giving people free access to care would cause demand and utilization to soar."

"That traditional thinking ignores the 'supply' side of the health care equation: doctors' and nurses' time and hospital beds are limited, and mostly already fully occupied," Gaffney added. "When doctors get busier, they prioritize care according to need, and provide less unnecessary care to those with minimal needs to make way for patients with real needs."

Between 1973 and 2020, various models have projected utilization increases ranging from 2% to at least 21%, but according to the authors, "nearly all predictions of utilization surges stemming from universal coverage expansions are overestimates."

There are a handful of studies that have sought to quantify how extending coverage to individuals affects healthcare consumption, but "the effect of universal coverage on society-wide utilization may differ from the effects of providing coverage for individuals," the authors write.

"Past society-wide coverage expansions haven't caused surges in healthcare use, so analysts who've confidently projected a tsunami of healthcare use and costs after Medicare for All are ignoring history," said Dr. Woolhandler.

According to the authors' review of the historical record, "universal coverage expansion would increase ambulatory visits by 7-10% and hospital use by 0-3%," while "modest administrative savings could offset the costs of such increases."

Notwithstanding discrepancies about the extent to which usage rates change in relation to coverage expansions, one finding shared by all analyses, the authors emphasize, is that "utilization-related cost increases would be partially or fully offset by savings on drug prices or reductions in provider fees, waste, and administrative costs."

As Common Dreams reported last month, the Congressional Budget Office (CBO) has estimated that implementing a single-payer health insurance program in the U.S. would reduce overall healthcare spending nationwide by about $650 billion per year.

Between the CBO's finding that Medicare for All's administrative cost savings have been underestimated and Gaffney et al.'s finding that the effects of universal coverage reforms on healthcare utilization and costs have been overestimated, it is becoming increasingly clear that in addition to saving lives, Medicare for All would be less expensive than previously acknowledged.

"In projecting the impacts of coverage expansions, analysts who fail to accurately account for supply-side factors will overestimate the costs of reform," the authors write. "Such errors may cause policymakers to mistakenly conclude that reforms that would cover millions of Americans are unaffordable."

"Conversely," they continue, "policies that increase the supply of medical resources are likely to increase utilization, even without coverage expansions... Supply expansions that are not tailored to need could have the unintended consequences of boosting the provision of low-value care and costs."

The authors insist that like other countries, the U.S. can constrain "utilization and cost growth without resorting to cost barriers while achieving universal coverage and a more equitable distribution of care."

As Matt Bruenig of the People's Policy Project wrote last month, "The barriers to the policy are not technical deficiencies or costs, but rather political opposition from Republicans and conservative Democrats who would rather spend more money to provide less healthcare."