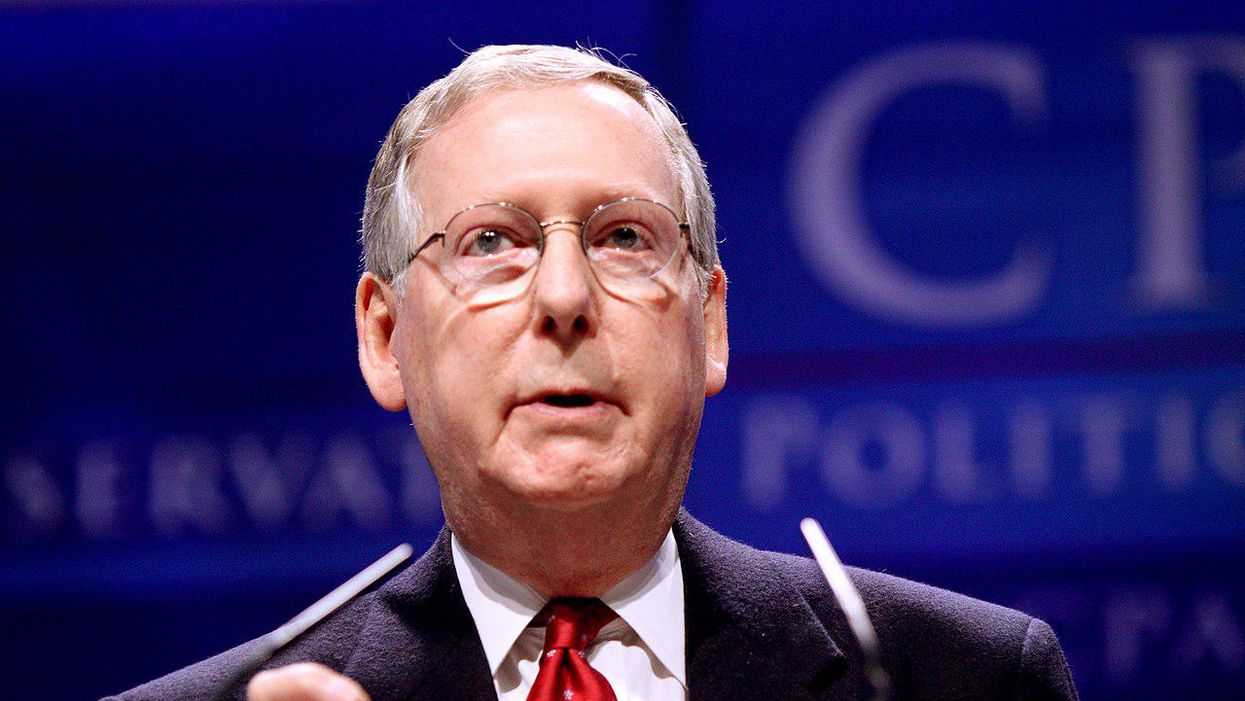 Soon-to-be Senate Minority Leader Mitch McConnell is attempting to obtain a commitment from his Democratic counterparts to keep the archaic legislative filibuster in place once they officially take charge of the chamber, a demand that progressives characterized as a last-ditch effort to cripple the incoming Biden administration's policy agenda.

In ongoing negotiations with Sen. Chuck Schumer (D-N.Y.) over an organizing resolution that will govern the upcoming 50-50 Senate, McConnell is reportedly working to undercut the growing momentum behind eliminating the filibuster—which, if left intact, would effectively give Republican senators veto power over much of President-elect Joe Biden's legislative agenda.

"The time is ripe to address this issue head on before the passions of one particular issue or another arise," McConnell said in a statement Tuesday. "A delay in reaching an agreement could delay the final determination of committee assignments but it is important to maintain the status quo on the legislative filibuster."

Schumer has thus far declined to commit to preserving the filibuster, which requires 60 votes to break. In a statement, Stand Up America managing director Christina Harvey urged the New York Democrat to forcefully reject McConnell's demand, characterizing the Republican leader's effort as deliberate sabotage of the incoming Congress and administration.

"Mitch McConnell is desperate, grasping for straws, and attempting to use what little power he has left to stymie bold progress for the American people," said Harvey. "Soon-to-be Senate Majority Leader Schumer should immediately reject this blatant attempt to undermine the Democratic majority before it has even been seated and swiftly affirm that filibuster reform is still on the table."

While the ongoing rule negotiations between McConnell and Schumer are standard procedure, former Democratic Senate staffer Adam Jentleson argued that the Kentucky Republican's push to safeguard the filibuster represents an unacceptable effort to deny the "legitimacy" of the incoming Senate majority.

"If McConnell insists, the Dem response should be to go nuclear on the organizing resolution, which under current rules needs 60 [votes] to pass," said Jentleson. "Dems extended a reasonable deal, McConnell spit on it. So reform the filibuster now, organize the Senate as Dems want, and pass Biden's agenda."

This is very telling. McConnell knows that the filibuster is the way he holds onto power and control of the Senate… https://t.co/H7Mv61reQ9
— Eli Zupnick (@Eli Zupnick)1611084061.0

Politico reported Tuesday that Schumer and McConnell "are largely expected to run the Senate in a similar fashion to how former Senate leaders Trent Lott and Tom Daschle devised the last 50-50 blueprint in 2001."

"That allowed for committee memberships to be evenly split, with bills that receive tied votes advancing to the floor; the party controlling the White House would still set the Senate schedule and determine which legislation would get taken up," Politico explained. "But there's so much to be negotiated this time around beyond just the operations of the Senate. Among the unanswered questions: When will President Donald Trump's impeachment trial start and how long will it go?"

A spokesperson for Schumer said that during a meeting with McConnell on Tuesday, the New York Democrat "expressed that the fairest, most reasonable, and easiest path forward is to adopt the 2001 bipartisan agreement without extraneous changes from either side," an apparent reference to McConnell's filibuster demand.

Progressive organizer Murshed Zaheed tweeted late Tuesday that it is "encouraging to hear that Schumer is holding firm in not giving in to McConnell in making any commitment on the filibuster."

"For the sake of our democracy and our country he can't budge on this," Zaheed added. "When McConnell/Republicans revert to obstruction, Schumer will need to nuke the filibuster."

The talks between McConnell and Schumer come as progressive advocacy groups are vocally calling on the incoming Democratic Senate to swiftly pave the way for Biden's agenda on coronavirus relief, climate, civil rights, and other key matters by eliminating the legislative filibuster—a move that several right-wing Democrats, including Sen. Joe Manchin (D-W.Va.) and Kyrsten Sinema (D-Ariz.), have said they oppose.

Democrats would need every member of their Senate caucus and a tie-breaking vote by Vice President-elect Kamala Harris to scrap the filibuster.

In a memo released Monday, the youth-led Sunrise Movement, Justice Democrats, and New Deal Strategies argued that the best way to overcome GOP obstruction is to "get rid of the filibuster immediately, and proceed to pass Biden's agenda through regular order—including must-pass civil rights bills, climate solutions, and statehood."

"A quick strike against the filibuster in January will set Biden up to shepherd his entire agenda through regular order, with full committee involvement and proper levels of oversight and transparency," the memo reads. "Biden has the credibility and the political capital to bring along the small number of wavering senators. Every other path leads to needless complications and worse results for the American people."