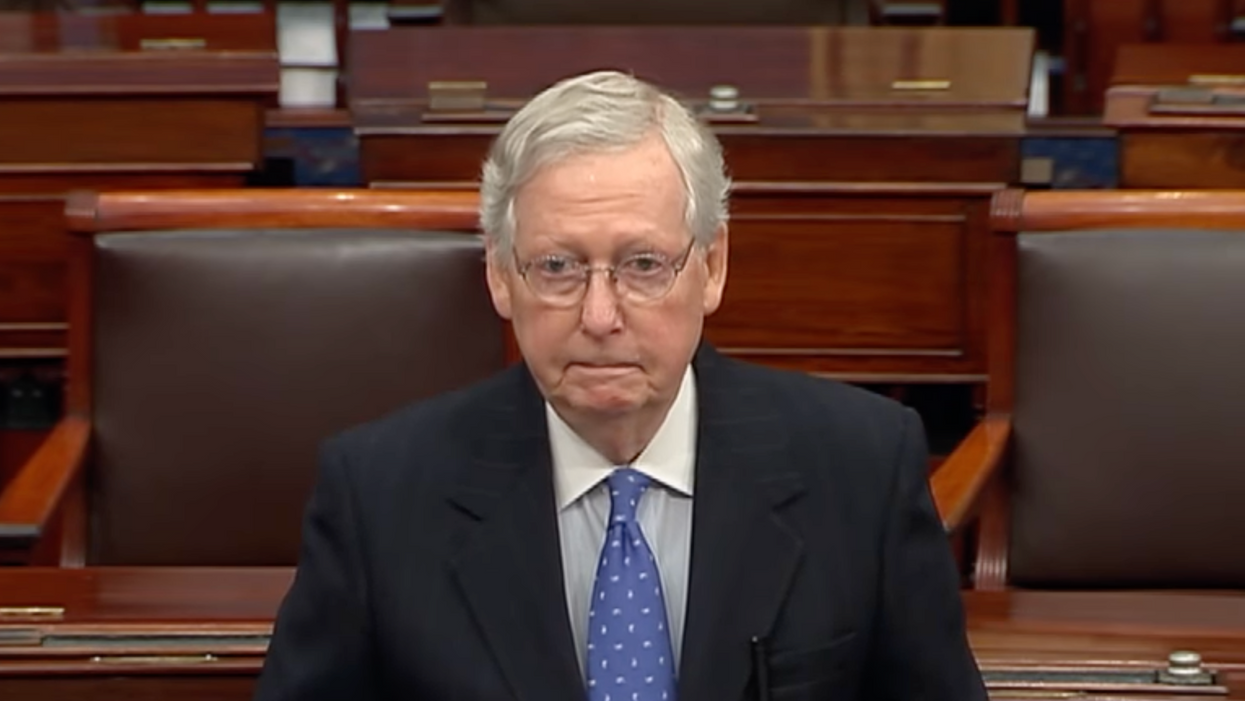 After just 10 House Republicans joined with Democrats in a historic vote Wednesday that made President Donald Trump the only U.S. president ever to be impeached twice, a diverse collection of political figures and advocacy groups delivered a clear message to Senate Majority Leader Mitch McConnell: "Finish the job."

That call was the subject of an email that Rev. Lennox Yearwood, founder and president of the Hip Hop Caucus, sent to supporters following the vote. As Yearwood put it: "Trump and his minions are rioting because WE voted, and we are WINNING across the country. We did our job at the voting booth. The House did its job today. Now it's time for the Senate to do the job it was elected to do, and to remove a president who has regularly and systematically endangered not only the American public—but a president who has encouraged a violent assault against Congress itself."

In a 232-197 vote, the Democrat-controlled House approved a resolution charging Trump with engaging in "high crimes and misdemeanors by inciting violence against the government of the United States," referencing his lies about the November election that prompted a mob to storm the U.S. Capitol on January 6, 2021.

The House of Representatives has done its job and impeached Donald Trump on a bipartisan basis. The Senate must no… https://t.co/QB6LmRMmVz
— Bernie Sanders (@Bernie Sanders)1610580520.0

Although, reportedly, McConnell (R-Ky.) privately supports impeaching Trump over the insurrection, the GOP leader said Wednesday that he won't reconvene the Senate early to hold a trial before President-elect Joe Biden is sworn in next week. After winning a pair of runoffs in Georgia earlier this month, Democrats will soon take control of the chamber, with Vice President-elect Kamala Harris breaking any tie votes.

Soon-to-be Senate Majority Leader Chuck Schumer (D-N.Y.) said in a statement Wednesday: "Donald Trump has deservedly become the first president in American history to bear the stain of impeachment twice over. The Senate is required to act and will proceed with his trial and hold a vote on his conviction."

"Now that the House of Representatives has acted, the Senate will hold a fair trial on the impeachment of Donald J. Trump for his role in inciting the violent insurrection at the U.S. Capitol," Schumer vowed, noting that the process could begin immediately if McConnell agreed to reconvene for an emergency session.

Now that the House has impeached Donald Trump, the Senate must act immediately to make it clear that there are cons… https://t.co/cj0a5s2b0l
— Tammy Duckworth (@Tammy Duckworth)1610575388.0

Greenpeace executive director Annie Leonard concurred, encouraging senators to act with urgency following the House vote. According to Leonard, "Trump is and will continue to be a threat to the world if he is not immediately removed from office and prevented from ever holding public office again."

"Never again can we allow those who govern us to attack our democracy. We must hold these traitors to account, starting with the traitor-in-chief, Donald Trump," she said, while also demanding accountability for any Republicans in Congress who helped incite the attack. "There must be consequences for inciting and attempting to overthrow democracy. Republicans must decide whether they are on the side of a people-powered democracy or might-makes-right autocracy. And we have to hold them accountable for their decisions."

Earthjustice president Abigail Dillen also celebrated the House vote and said Trump "must be removed." During his presidency, she added, "we have learned hard lessons about the fragility of our democracy. Our future as a country depends on decisive action and unflagging vigilance to uphold the Constitution and the rule of law."

Thank you to every single House Democrat and the 10 Republicans who voted to impeach Donald Trump, for the second t… https://t.co/p33d2pLsDs
— Sierra Club (@Sierra Club)1610582103.0

While the impeachment elicited applause, Stand Up America founder and president Sean Eldridge emphasized that "the Senate must now move as quickly as possible to convict, remove, and disqualify Trump from ever seeking federal office again."

Eldridge also blasted the GOP House members who opposed impeaching Trump, saying that "his high crimes are too grave to ignore and the danger he poses too great to allow him to remain in office—or ever hold it again. The Republicans who voted against impeachment put their loyalty to a seditious president over their duty to support and defend our Constitution."

Our Revolution executive director Joseph Geevarghese echoed that message, making clear that his organization "stands with the Democratic and Republican members of Congress who voted today to immediately remove Trump from the White House" and now calls on the Senate to "take swift action to neutralize this threat to our nation's democracy and its people."

Common Cause president Karen Hobert Flynn said Senate Republicans "must put their country before their political party for the good of the nation and convict the president for inciting an insurrection. If they do not, the risk of President Trump resorting to still more desperate acts will only increase. This president has caused enormous damage to our democratic values and our Constitution. Donald Trump should be removed from office immediately and banned from ever holding public office again."

Rahna Epting, executive director of the progressive advocacy group MoveOn, agreed that "the House did its job, now the Senate must act immediately."

"We applaud the House for taking swift and bipartisan action to hold him accountable for his deadly actions," said Epting. "But our nation is not safe from Trump further turning the power of the presidency against the U.S. government so long as he is in office.

"The white nationalist forces... Trump incited into deadly violence against our democracy last week are plotting more attacks right at this moment," added Epting. "Trump is our nation's greatest national security threat. Every moment he spends in office puts the nation at further risk... McConnell should call the Senate into immediate session and remove... Trump from office before he can do further harm."

Heather May, director of democracy policy at Indivisible—the progressive movement that was formed in reaction to Trump's election—sent an email Wednesday asking the group's members to take matters into their own hands by contacting their senators and demanding that they "vote yes on convicting, removing, and disqualifying Trump," and that they "tell McConnell that he must call the Senate back into session to consider the impeachment."

The House has done its job. Now we need the Senate to convict Donald Trump and disqualify him from ever holding fed… https://t.co/3mnkxMe5Uh
— Indivisible Guide (@Indivisible Guide)1610576175.0

Jean Ross, RN, president of National Nurses United, said that "a second impeachment and the first-ever conviction of a president by the Senate would send an unequivocal message about President Trump's violation of his Constitutional oath in encouraging the deplorable violent assault on the Capitol and unprecedented attempted coup intended to overthrow the democratic presidential election by United States voters."

"As a nation, we must dedicate ourselves to rooting out the threat of far-right terrorism and plague of white supremacist hatred that animates so much of it, and commit to building once and for all a nation of tolerance, healing, and racial justice," Ross added. "Unless we make that a priority, this scourge will impede any progress we can make in health and economic security for all Americans that is so vital to our future."