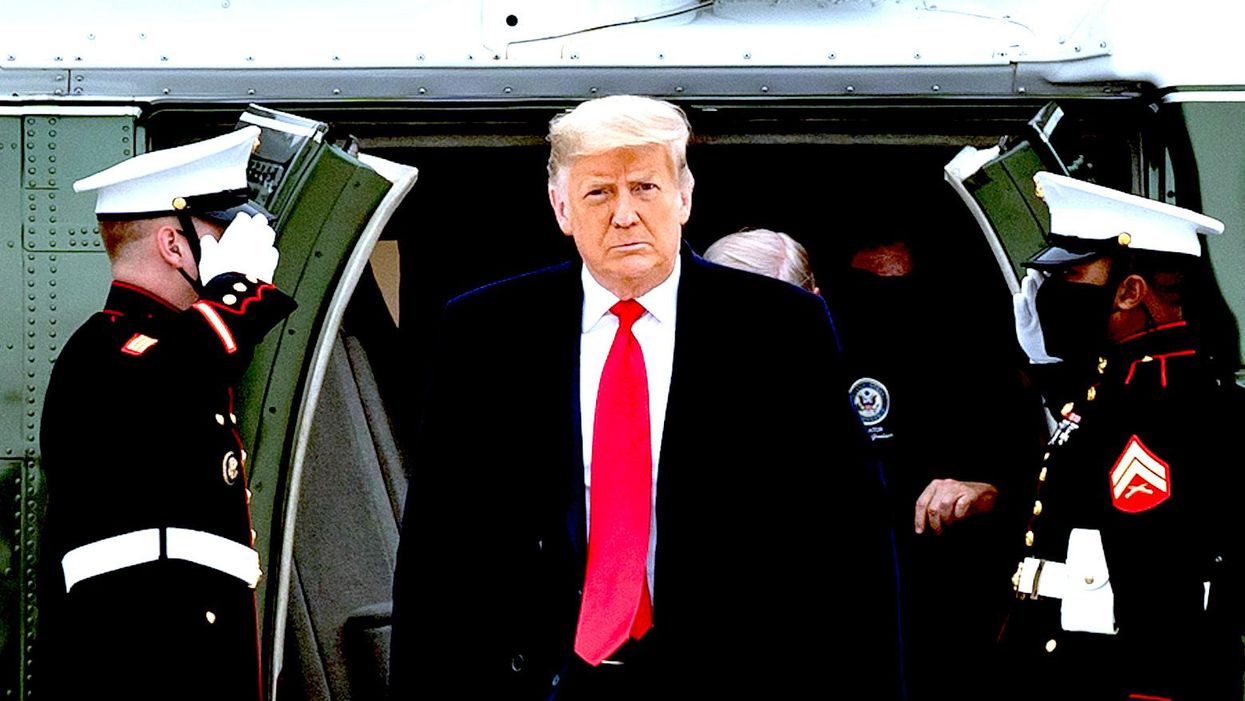 Donald Trump's attempted coup against our government was predictable. He had it all planned out. He would incite thousands of supporters to attack the Capitol, disrupt the proceedings of the Senate and find a way to maintain his grip on power. He knew full well that his violent insurrectionists had blood on their minds and that Speaker Nancy Pelosi and Vice President Mike Pence were in harm's way. He knew there was a chance that both Pelosi and Pence could be kidnapped or murdered. He did not care one whit. He was partying and celebrating as the attackers formed and began their deadly march. He was inciting an insurrection against the United States for his own personal gain. Democracy and human life were of no concern to him.

But his efforts failed. The Senate was not overtaken. Joe Biden was certified as the next president. Pelosi and Pence were both safe. The attackers are being hunted down one by one and arrested. Trump has now been impeached for the second time, with 10 Republican members of Congress joining with every Democrat. Pence apparently contemplated the possibility of invoking the 25th Amendment (although he has now said he will not do so). The majority of Americans believe that Trump should be removed from office immediately for his treasonous behavior.

After last week's insurrection attempt, Trump is now trying to act as if nothing out of the ordinary happened. What is the big deal if some looters swarmed through the Capitol? As he has always done, Trump relies on lies, denials, conspiracy theories and fake bravado to skirt through life and through his presidency. But rhetoric and actions are observable truth. And Trump's clear incitement of insurrection means he is a traitor. It means he disavowed the will of the people and the rule of law. It means his personal gain is more important than the Constitution and his oath of office.

This all makes sense because Donald Trump is a psychopath. He is fueled by his narcissism, his sadism, his paranoia and his antisocial proclivities. We have been eager to ignore these things, but Trump's sadism and violence have been front and center in his psyche the entire time. This is the man who separated young children from their families at the border. This is the man whose inaction has killed 372,000 Americans due to the coronavirus. This is the man who has tried to encourage violence multiple times at his campaign and presidential pep rallies. And this is the man who glorified violence in Charlottesville and in other cities.

We should not be surprised that Trump's sadism and violence boiled over in response to his humiliating election defeat. He has been hell-bent on hanging onto power at any cost. He has been willing to throw anyone and anything under the bus to ensure his self-preservation and his survival. So a violent insurrection in the sacred halls of the Capitol was the perfect plan in his mind. A few deaths would be palatable, even entirely acceptable, if it meant he could remain in power.

What should now be clear to everyone is that Donald Trump does not love democracy or our country. He is an authoritarian. He wants absolute authority and control over people. He loves adulation. He is a greedy opportunist. He is a master of demagoguery. He is corrupt and criminal. He is a traitor of the highest order. He was virtually the worst possible person to become president because everything about him is antithetical to our nation's principles and ideals. Being president is so much more than being rich. Personal character, love of democracy and love of country are far more compelling attributes.

Trump is a cataclysmic problem that will be solved soon. He will be booted out, or simply leave. Social media platforms have banned him. Companies are halting their financial contributions to his party and his supporters. The PGA has pulled its 2022 championship tournament from his New Jersey golf course. More and more Americans are rejecting him by the day. His mantra as a traitor is beginning to take hold. Ultimately, it will be set in stone.

Millions of supporters followed Trump for four years as if he were the pied piper. They did not realize or understand that he is a con man who thrives on hoodwinking and exploiting others. He lies every time he opens his mouth, and uses conspiracy theories and fear-mongering to seduce the allegiance of citizens who believe in him for various largely irrational reasons. Trump is no public servant, no brilliant businessman, no rich savant and no political leader. He is a fraud, a failure and a coward who ran for president in the first place to enhance his brand and make money off the public. Once in office, he became enthralled with power, adulation and grifting. He realized that being an authoritarian leader would allow him to express his sadistic and cruel tendencies — and that being a dictator would allow his racist and xenophobic and misogynistic impulses to run wild, without oversight or accountability. In the end, Trump decided that he wanted to remain in office so that he could establish an endless regime of Trumpism — all in his psychopathic image.

Americans should have realized back in 2016 that Trump was a bad actor who had nefarious and cruel intentions. He did not want to protect and serve the people. The oath of office was a bunch of isolated words that had no meaning to him. It was all a big lie and a big con from the beginning. Trump believed he could pull it off because he had spent his entire life promulgating a kind of alternate universe, with the help of enablers and a host of lawyers.

Trump's lies, conspiracy theories, magical thinking and corruption rapidly became normalized in our country, such that millions of Americans were radicalized. Fantasy and blather became more important than truth. Trump's alternate universe seemed to replace the real one. Our Constitution and the rule of law were corrupted. Our democracy was threatened. A psychopath was threatening democracy, and the media pretended not to notice. The opinions of mental health experts were rejected.

Ultimately, the judicial system and our Constitution stood tall throughout this presidency. Elected Republican officials did not. They either drank the Kool-aid or saw loyalty to Trump as a vehicle for personal political advancement. Either way, the Republican Party has been complicit and anti-democratic. Some of its members, perhaps most of them, want to carry on the mantle of Trumpism despite its malicious and destructive impact on our democracy. They will face their reckoning in due time.

Many of Trump's supporters will have a rude awakening when they realize that their esteemed cult leader was nothing more than a fraud. Once they see him prosecuted for his many crimes, they will understand his destructiveness to them and to our democracy. Truth will again become important. We will all be able to agree on observable facts. Negotiation and compromise will once again be central to our politics. Tribalism will gradually melt away as our interest in unity and cohesiveness expands.

Yet in many ways Trump has been a symptom rather than the sole cause of major divisions in our country. Racism, xenophobia, white supremacy, domestic terrorism, misogyny and other extreme forms of hate have been simmering in this country long before Trump. But these harmful and demoralizing issues will be easier to grapple with without a national leader who is psychopathic, anti-democratic and anti-American in his mental DNA.