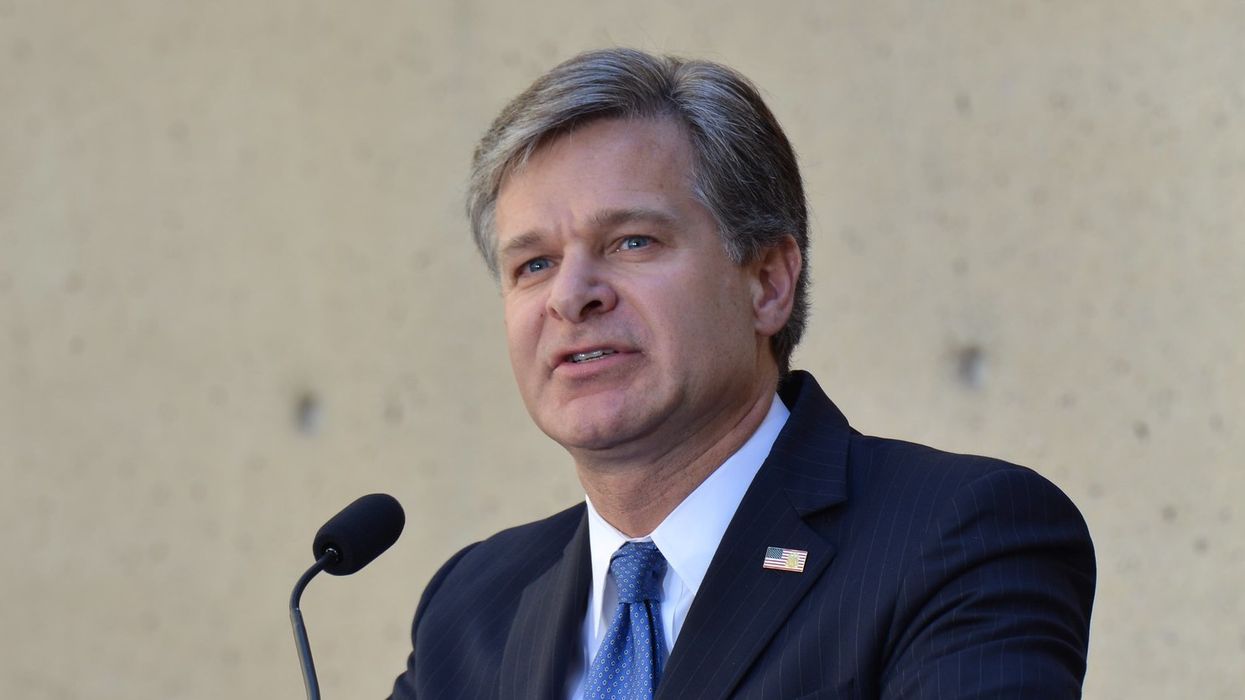 Director Christopher Wray addresses the audience during his formal installation ceremony at FBI Headquarters on September 28, 2017. Wray, a former U.S. attorney and assistant attorney general in the Justice Department's Criminal Division, was formally sworn in August 2, 2017 in a private ceremony.
Brett Wilkins
and
Common Dreams
January 11, 2021

The FBI on Monday warned law enforcement agencies across the United States that armed protests by Boogaloo Boys and other far-right groups are possible at state Capitols throughout the nation starting later this week, and that an unnamed militant group is planning a "huge uprising" if President Donald Trump is removed from office for inciting last week's deadly mob invasion of the U.S. Capitol.

"The FBI received information about an identified armed group intending to travel to Washington, D.C. on 16 January," the FBI bulletin—which was reported by ABC News and other outlets—read. "They have warned that if Congress attempts to remove POTUS via the 25th Amendment, a huge uprising will occur."

According to ABC News, the FBI has also received information that an unnamed right-wing extremist group is calling for "storming" federal, state, and local courthouses and other government buildings in the event that Trump is removed from office before his term expires on January 20.

The group is also planning on invading government offices in every state, regardless of whether Trump or President-elect Joe Biden won it in the 2020 presidential election, the FBI memo said.

NBC News reports the memo includes information provided by the U.S. Bureau of Alcohol, Tobacco, Firearms, and Explosives; the DEA; Defense Department; Park Police; and the U.S. Marshals, among other agencies.

Another FBI memo from December 29, 2020 obtained by Yahoo News states that members of the Boogaloo movement planning protests scheduled for January 17 "indicated willingness to commit violence in support of their ideology, created contingency plans in the event violence occurred at the events, and identified law enforcement security measures and possible countermeasures."

The Boogaloo Boys are a far-right movement known for their violence, their Hawaiian shirts, and their desire to spark a second U.S. Civil War. According to the Southern Poverty Law Center, the group's name and movement refer to their desire for a insurrectionist revolt that would constitute another Civil War. The first such war, started by secessionist Southern slave states, lasted from 1861 and 1865 and left some 620,000 Americans dead.

At least five people died during the January 6 invasion of the U.S. Capitol that occurred while lawmakers were attempting to certify the Electoral College vote that officially affirmed Biden as the next president.

Trump, along with some of his most prominent supporters, as well as numerous Republican members of Congress, stand accused of inciting the rioters with with lies about a "stolen election" and exhortations to "take back our country" and engage in "trial by combat."

There are also growing calls for Republican inciters including Sens. Josh Hawley (Mo.) and Ted Cruz (Texas) to resign over their roles in spurring the insurrectionists, and Rep. Cori Bush (D-Mo.) on Monday introduced a resolution calling for the expulsion of her GOP colleagues who incited the mob attack.